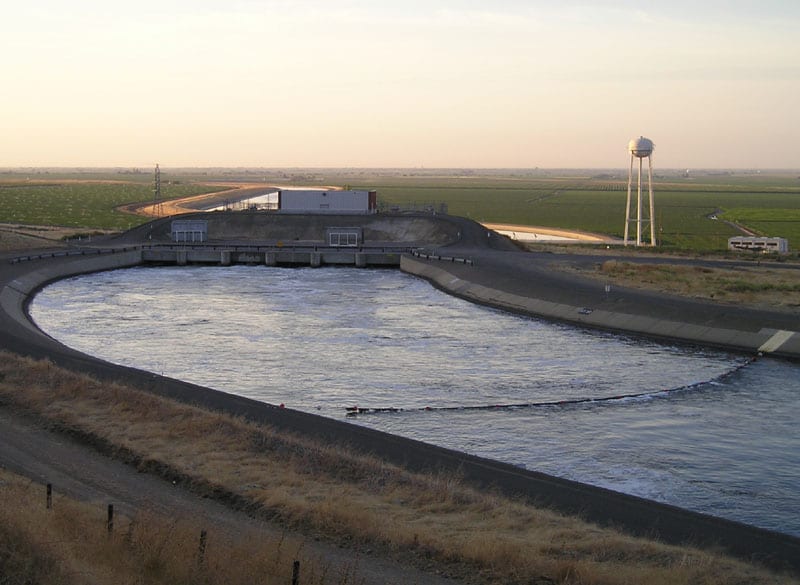 I hadn’t been living in arid Southern California for long before I toured the Colorado River Aqueduct — the 242-mile system of dams, pumps, and channels that divert water through the Mojave Desert to the sprawling 20-million population Los Angeles region. It’s a vast engineering marvel and something that, in concept, is remarkably simple.

The New Deal-era Parker Dam — a magnificent Art Deco structure that straddles the California-Arizona border — traps water from the river and pumps it to a holding pool at the top of a mountain. There, at the Metropolitan Water District of Southern California’s Gene Camp, the water begins its descent through meandering aqueducts and toward the ocean. (Watch out for the wild burros, which are descendants of those that hauled materials up to the dam project.)

Gravity does most of the work, but is helped along by four other pumping plants at various low points along the desert floor. The water ultimately is stored in Lake Mathews, in the foothills of the Santa Ana Mountains in Riverside County. It then flows to the Robert B. Diemer Treatment Plant on top of a hill in Yorba Linda, where gravity does its trick again, sending newly treated water to homes and businesses throughout the Southland.

Californians also receive their drinking water via the State Water Project, another impressive system of dams, aqueducts, and power plants that begins in the relatively water-rich north state. Throw in desalination plants and groundwater supplies, and that’s how a growing state of 38 million people is able to keep the taps flowing and the golf courses green.

After touring the Colorado aqueduct, I made this obvious point in a column: There is no possible way, with the state’s environmental rules and slow-growth sentiments, that anything like it could be built today. Indeed, the bulk of both water projects was built in a shorter time than it would take to simply approve an Environmental Impact Statement for any upgrade to the existing water system.

In recent years, California had been struggling under a devastating drought. State officials argued about new storage, imposed tough water-rationing standards, and advanced a pork-barrel-filled bond measure. Then, as fate would have it, the rains started, leading to the removal of drought conditions throughout the state. My little ranch is near the state’s last undammed river, and I watched in fear last year as cascading waters from the Sierra Nevada mountains washed over the aging levees.

The spillways at the nation’s tallest dam in Oroville, in the northern Sacramento Valley, came close to failure that season. It led to the evacuation of 180,000 people — and discussions about the pitiful state of California’s basic infrastructure. It seems the state is too busy cooking up new spending programs to maintain what a previous generation of Californians had built. There’s a sense in the Capitol that our water problems are now far too big to solve.

This year has been a dry one, despite the horrific mudslides that devastated Montecito. And now state officials are back to their old way of doing things. As CBS News reported this week, “A proposal to make California’s drought-era water restrictions permanent could allow the state to chip away at long-held water rights in an unprecedented power grab, representatives from water districts and other users told regulators Tuesday.” The new plan includes more water inspectors to report on water-wasters, restrictions on watering lawns, and so forth.

Some of these restrictions, although justifiable in the thick of a drought, are hard to stomach after looking at how state and federal officials managed some of our water resources. I had reported on efforts to significantly lower New Melones Lake, in the Sierra foothills near Copperopolis, during one of the worst drought years — as a way to save a handful of hatchery fish that were endangered by falling stream levels. That’s what happens when governments, acting through political processes rather than market conditions, make such decisions.

The real solution is not to “chip away at long-held water rights,” but to reinforce a system of rights and markets so that water users are incentivized to use water in its most economically appropriate way. Water is no different than any other commodity. If there’s a drought, the price should reflect its scarcity, which will convince people to use it more wisely. That, and an end to regulations that make it unnecessarily difficult to sell, store, and trade water, will do far more to conserve water than have people spy on their neighbors.

It’s a complex topic, but there are many ways that policymakers can help our state stretch its water resources without spending a fortune. California and other western states use a “prior appropriation” system of water rights, where current uses are dictated by past uses. As my R Street Institute colleague Josiah Neeley explains in a new study, the result is that urban users pay far higher prices for water than agricultural users. It’s the reason one finds water-intensive crops thriving in the Imperial Valley, one of the driest places on Earth.

Neeley suggests a few common-sense, market-based policies. California should eliminate restrictions on changing the designated use of water supplies. In other words, farmers should be free to sell their water to urban users, as demand sees fit. Other ideas: eliminate rules that cause water-rights holders to use all their allocation or lose it; reduce the number of permits needed before water-rights holders sell their water; expedite the approval process for water leases; and expand the water-banking system that matches willing buyers and sellers.

Then there’s a sensible one that many of our state’s environmental activists oppose: build more dams and reservoirs to — get this — save water for a not-so-rainy day. This is painfully obvious, but controversial in a state that views new storage facilities as de facto assaults on the environment. For instance, arid San Diego had too much water during the drought’s darkest days because of its water agency’s embrace of water storage, not to mention its approval of a private desalination plant that turned ocean waves into drinking water.

There are far more possibilities at hand than more regulations and restrictions on water use. Unfortunately, too many California politicians use water policy as a means to achieve growth control. They don’t want water, because water means more people. But for those California policy makers who are serious about assuring that there’s enough water to meet the needs of our growing population, there are plenty of options. Any state that could build such an amazing system of dams and aqueducts can certainly assure that there’s enough additional space to store water for any coming drought years — provided they rely on markets and not just government.

Steven Greenhut is Western region director of the R Street Institute. Write to him at sgreenhut@rstreet.org.