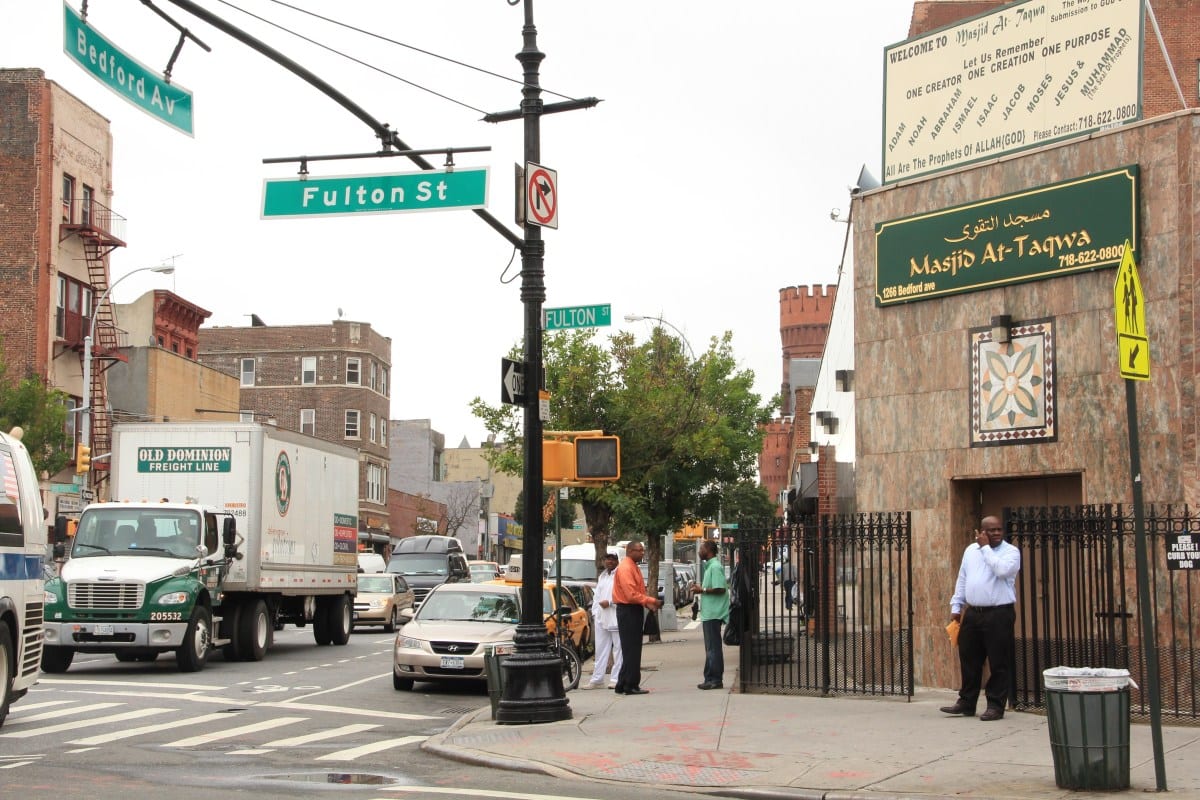 A local Brooklyn mosque with a checkered history and once surveilled by the NYPD continues to promote radical content online.

Ali Abdul-Karim Judan, mosque spokesman and head of security for At-Taqwa mosque in Bed-Stuy, Brooklyn, posted a video on Facebook Live titled “Are Muslim Women Who Are Covered According to What Allah Has Legislated in the Qur’an and Women Who Are Not Judged Equally!”

In the video, Karim argues that women who do not fully cover their bodies and who show “any indication” of their form are “cursed,” “disobedient,” and “deviant.” This includes “any woman who wears perfume in public” and members of the trans community.

Preaching to a Facebook audience of over 5,000 followers, Karim claims that God’s laws assign men and women “different roles” and that men are the designated “maintainer” of women.

He discusses the Islamic concept of Tabarraj, or “beautification,” which he argues is “forbidden” and “so abhorrent that it is associated with fornication, stealing, and all other sins.”

Karim concludes that Allah does not judge equally women who are dressed in “clothes of righteousness” and those who are not, calling the issue of women’s dress a “crisis” in society that must be “managed.”

Despite its association with supposedly “progressive” Islamic organizations such as the Council on American-Islamic Relations (CAIR), the Muslim American Society (MAS), and the Islamic Society of North America (ISNA), the At-Taqwa mosque has revealed itself to be an illiberal institution that espouses demeaning views towards women and the transgender community.

It is worth noting that CAIR, a prominent Islamic organization that emphasizes an alliance with progressive groups, claims to stand for women’s rights and uniformly endorses Democratic candidates in local, state, and federal elections, has a close relationship with At-Taqwa.

The mosque’s leading Imam, Siraj Wahhaj, is a regularly featured speaker at CAIR’s annual banquets and is a former member of its advisory board. As recently as 2017, Wahhaj, who previously served as vice president of ISNA, headlined the group’s annual conference. Wahhaj has called homosexuality a “disease” that is punishable by death and declared in 1992 that he would set fire to a proposed mosque in Toronto that was tolerant of the LGBT community. Wahhaj previously defended stoning and other forms of punitive violence and on several occasions has come to the defense of convicted terrorists, including Omar Abdel-Rahman, otherwise known as the “Blind Sheikh,” who masterminded the 1993 World Trade Center bombing and inspired dozens of other terrorist plots.

Wahhaj served as a character witness for Rahman during the trial and has called the attacks a conspiracy against Muslims staged by the U.S. government. He converted to Islam under the guidance of notorious anti-Semite and homophobe Louis Farrakhan. In the ’90s, he was outspoken in his support of Sharia law, once declaring in a sermon, “I want the Sharia.” He is also on record as saying, “Politics are a weapon to use in the cause of Islam … If only Muslims were clever politically, they could take over the United States and replace its constitutional government with a caliphate.” Stephen Schwartz, executive director of the Center for Islamic Pluralism, called Wahhaj a “hatemonger” and the “No. 1 advocate of radical Islamic ideology among African-Americans.” In 2008, some 175 pieces of literature Wahhaj had written on Islam were discovered in U.S. prison libraries.

The At-Taqwa mosque was itself the subject of a controversial surveillance program by the NYPD in 2013. The NYPD defended the program by claiming the mosque had reportedly raised hundreds of thousands of dollars for terrorist organizations and was believed to have a gun club with illegally procured weapons.

As head of security, Karim hosts self-defense workshops on a weekly basis and posts videos of them on Facebook. Some of these workshops have offered militaristic training and included instructions on how to disarm law enforcement officers. Several of Karim’s participants have referred to themselves as “jihad warriors.” One of them, Farooque Ahmed, pled guilty to plotting an attack on the Washington D.C. Metro.

Most recently, in 2018, Wahhaj’s son, a devout Muslim and polygamist, along with four of his relatives, were charged with operating a terrorist training camp for children. The scandal involved a New Mexico compound raided by law enforcement where, inside, Wahhaj’s toddler son (Siraj Wahhaj’s grandson) was found dead, alongside 11 malnourished children and a large cache of firearms. According to court papers, the children were being trained to attack “teachers, military, law enforcement, and financial institutions.”

Both CAIR and MAS released statements of solidarity with the Wahhaj family in response to the incident.

The misogyny, militarism, and promotion of theocracy embraced by the At-Taqwa mosque are hardly progressive values. This, then, casts doubt on the professed liberalism of CAIR, MAS, ISNA, and other groups that come to the defense of At-Taqwa and its Imams.

Karys Rhea a writer and musician living in Brooklyn. She is the New York associate of the Counter-Islamist Grid, a project of the Middle East Forum.