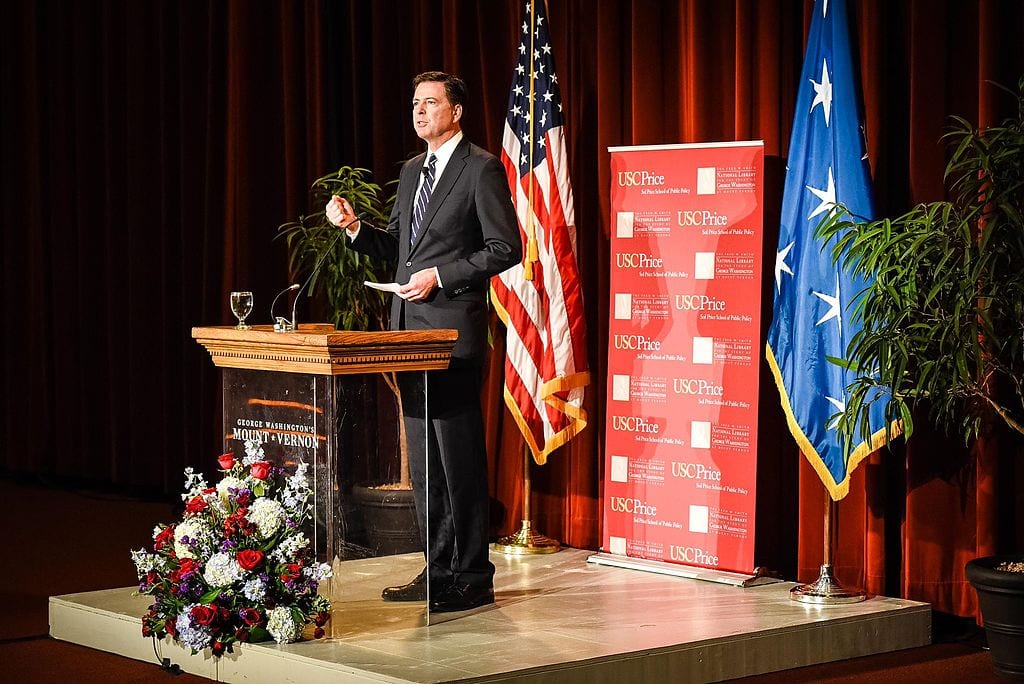 James Comey uncorked the whopper earlier this year that he still “didn’t know for a fact” Hillary Clinton financed the infamous dossier of Christopher Steele — an epic lie reminiscent of his denial, leaked through James Clapper and other stooges, that the FBI spied on Trump Tower, even as warrants to spy on Trump Tower sat on his desk!

Comey is set to meet with Congress on Friday, testimony sure to be riddled with the weaseliest of evasions. According to the Hill’s John Solomon, House Republicans are aware of emails showing that the FBI and Justice Department knew damn well that the FISA application to spy on Trump campaign volunteer Carter Page rested on partisan and flawed opposition research purchased by the Democrats. The House Republicans are calling on Trump to declassify those e-mails.

Comey is implicated in the emails, reports Solomon:

Just before Thanksgiving, House Republicans amended the list of documents they’d like President Trump to declassify in the Russia investigation. With little fanfare or explanation, the lawmakers, led by House Intelligence Committee Chairman Devin Nunes (R-Calif.), added a string of emails between the FBI and the Department of Justice (DOJ) to their wish list.

Sources tell me the targeted documents may provide the most damning evidence to date of potential abuses of the Foreign Intelligence Surveillance Act (FISA), evidence that has been kept from the majority of members of Congress for more than two years.

The email exchanges included then-FBI Director James Comey, key FBI investigators in the Russia probe and lawyers in the DOJ’s national security division, and they occurred in early to mid-October, before the FBI successfully secured a FISA warrant to spy on Trump campaign adviser Carter Page.

The email exchanges show the FBI was aware — before it secured the now-infamous warrant — that there were intelligence community concerns about the reliability of the main evidence used to support it: the Christopher Steele dossier.

The exchanges also indicate FBI officials were aware that Steele, the former MI6 British intelligence operative then working as a confidential human source for the bureau, had contacts with news media reporters before the FISA warrant was secured.

So Comey knew that at least someone inside the Justice Department thought the application tainted and signed it anyways. Hillary, in effect, was purchasing a FISA warrant against her opponents, and the FBI went along with it. Crossfire Hurricane, the FBI’s name for the espionage against the Trump campaign, was supposed to be her October surprise, but it fell flat, though not for lack of trying on the part of Team Hillary, both inside and outside the Obama administration. In the weeks before the election, John Brennan at the CIA, Peter Strzok at the FBI, Jonathan Winer at the State Department, among others, were leaking mentions of the Trump-Russia investigation to the press, which Hillary aides like Jennifer Palmieri then picked up and disseminated, passing off their own self-generated oppo research smears as objective news items.

“We now know the FBI used an article from Yahoo News as independent corroboration for the Steele dossier when, in fact, Steele had talked to the news outlet,” reports Solomon. “If the FBI knew Steele had that media contact before it submitted the article, it likely would be guilty of circular intelligence reporting, a forbidden tactic in which two pieces of evidence are portrayed as independent corroboration when, in fact, they originated from the same source. These issues are why the FBI email chain, kept from most members of Congress for the past two years, suddenly landed on the declassification list.”

Let’s hope Trump does declassify the email chain. It will shed light on how something as monstrously stupid as a FISA application stitched together from the smears of one campaign against another campaign could happen without serious dissent. It will probably show that someone weakly raised an objection or two but was shushed by all the partisan liberal lawyers and agents Eric Holder, Loretta Lynch, and Comey had hired.

Holder was famous for not letting anyone but flagged liberals work at the Justice Department. Years of such hiring creates the kind of groupthink that would allow for a cock-up of FISA-gate’s magnitude, where an American citizen was treated as a “probable” Russian agent whose every communication, both past and present, could be ransacked by FBI agents, all based on the word of a political opponent.

Take away Comey’s sanctimony and he was just a crook with a badge, congratulating himself for the agonies of his “conscience” while violating the civil liberties of a campaign volunteer caught up in the Obama administration’s espionage.