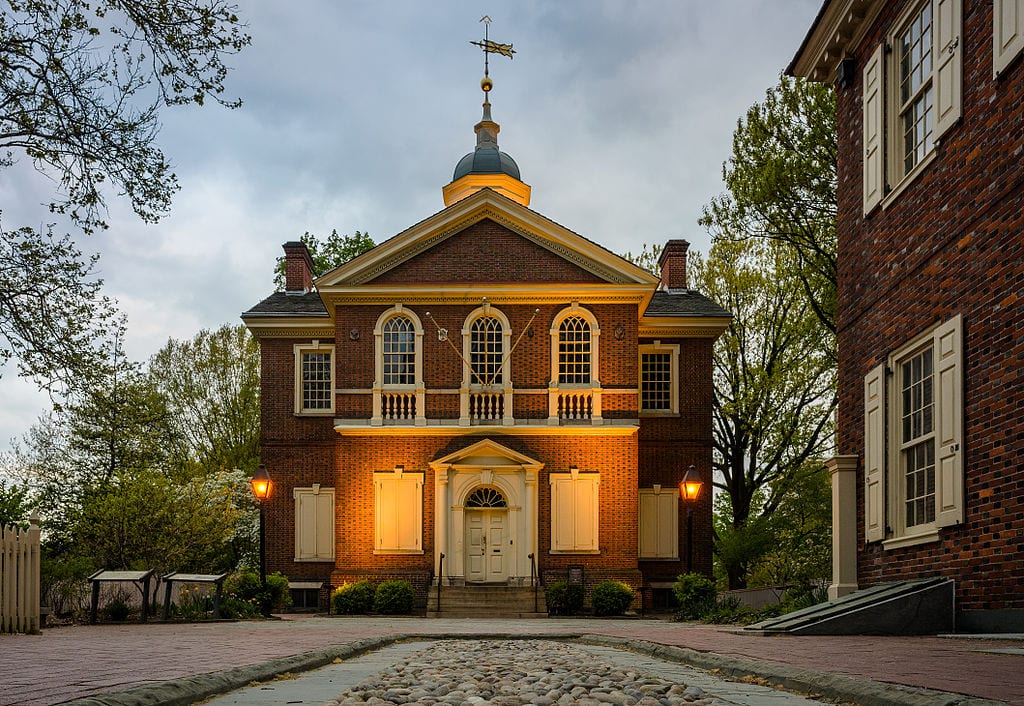 The Citizens Alliance of Pennsylvania (CAP), the leader in a capitalist revolt in Pennsylvania, is now spreading its message beyond the state’s borders. And it has gained a receptive audience. That audience gathered a few days ago for a conference held in a place that could not be more symbolic of CAP’s efforts — Carpenters’ Hall in Philadelphia.

The event: What would become known to history as the First Continental Congress.

The delegates: Representatives from 12 of the 13 British colonies — all except Georgia. Among them were names that would become famous in the unfolding events: John Adams, his fire-breathing cousin Sam Adams, John Jay, Patrick Henry and George Washington.

The First Continental Congress had been convened to protest the Intolerable Acts that had been passed by the British Parliament as punishment for Massachusetts and its defiance of the tea tax. A defiance that included the Boston Tea Party, with rebellious colonists dressed as Indians and boarding British ships to toss their cargo of tea into Boston Harbor.

The main accomplishment of the First Congress was an agreement by the colonies to band together to boycott all British goods — and to set a date for a Second Continental Congress the following year. There was also a “Petition to the King” to repeal the Intolerable Acts — a petition the King ignored. The rest, as they say, became serious history. With the First Continental Congress marked as the beginning of what would eventually become the United States of America — the Declaration of Independence was declared two years later just up the street from Carpenters’ Hall in the Pennsylvania State House — Independence Hall.

This time the gathering at Carpenters’ Hall was what can only be called a spreading capitalist revolt — and as in 1774, 12 of the original 13 colonies were represented, plus others from what were called the “swing states” of modern America — Florida, Iowa, Michigan, Ohio, and Wisconsin. Texas showed up too. Curiously, both in 1774 and 2019 the missing state was the same state — Georgia. This time the attendees included a Delaware state senator, a former Ohio Congressman, think tank veterans, political consultants, grassroots activists, business leaders, and a leader in mobilizing youth activists.

In this space in 2012 I wrote up what was called at the time Pennsylvania’s Capitalist Revolt in which I noted a growing spirit of rebellion by Pennsylvania capitalists at what they called the “bi-partisan collusion of career politicians, labor unions and trial lawyers that has mired the Commonwealth in corruption and economic stagnation.” Also noted was just who was the force behind this movement:

Specifically, they are banding together under the banner of a group they are calling the Citizens Alliance for Pennsylvania — CAP. (CAP’s website can be found here.) And CAP is now roaming the state with all the subtlety of Allied forces storming the beaches of Normandy on D-Day.

As the new gathering the other day demonstrated vividly, CAP has not only been a serious success, the movement is now spreading across the country. Under the leadership of John Kennedy, a serious capitalist himself who built his Kennedy Railroad Builders from scratch, then served eight rebellious years as a Republican in the Pennsylvania state legislature — CAP has focused like a laser on what the Harrisburg Patriot-News, the state capital’s newspaper, describes as replacing “those (Republican state legislators) who stray from their definition of party principles.”

There is a pattern with what CAP describes as “The Iron Triangle of career politicians, bureaucrats and lobbyists for Big Government special interests.” Republicans campaign for the state legislature as conservatives who believe in limited government and low taxes. Once elected, however, those principles mysteriously evaporate as they themselves quietly become part of that Iron Triangle. Unlike Kennedy, who left the legislature voluntarily after serving four terms and refused to take his generous state pension, too many Republicans become what they said they opposed. They abandon the concept of the citizen legislator to become career politicians. And all too frequently if and when they leave, the legislators become, but of course, lobbyists.

This is exactly why Washington has acquired its well-deserved reputation as “The Swamp.” But the same problem is at play in state legislatures, and CAP exists to defeat the creatures of the Harrisburg Swamp and elect more employers — capitalists. Kennedy says that the state legislature while he was there “hardly had any employers” — and now Pennsylvania leads in “all the wrong things — taxes, unfunded liabilities,” and more. The only way to correct the problem, he says, is to have men and women who have their hearts in changing the system by taking the time out from their private sector careers to serve for a limited time and take on the Iron Triangle. Says Kennedy:

It is CAP’s job to “train them, fund them, to get them elected, to serve, serve without pension, serve limited terms, improve the business climate, clean up the legislative process and then go back home. We’re the centerfold for that.”

The interesting fact here is that CAP, after ten years, has had such success in Pennsylvania that it has now reached out to like-minded Americans in other states to, as it were, nationalize this movement. As was observed at the CAP conference, it is state legislatures that frequently serve as the stepping-stone to seats in the U.S. House and U.S. Senate — where, of course, the Iron Triangle problem is at work on a massive scale.

To make this work, as was noted at the conference, there has to be a mix of the intellectual policy base with the aforementioned political and legal allies.

This being 21st century America, a considerable part of the gathering was devoted to the realities of political organizing courtesy of the IRS. It is simply not possible to discuss the ideas underpinning this kind of modern day rebellion without plunging into the morass of IRS regulations — 501(c)(4)’s and 501(c)(3)’s — not to mention any and all other legalities that must be carefully adhered to. From the legal basics to IRS compliance issues CAP had organized a serious seminar on the do’s and don’ts of modern political organizing. The basics of fundraising were covered — with a special concentration on getting other capitalists to step up and lend a hand to organizations that are out there to carry the capitalism and entrepreneurial flag into state legislatures. Not to be forgotten were political tactics — dealing with state or local political party leadership that has become part of the Establishment.

In CAP’s case, Kennedy’s allies in this effort include a roster of fellow Pennsylvanians all with considerable across-the-board experience themselves. They include, alphabetically:

The importance of having team members or allies like these is crucial. Every base is covered — from the intellectual and policy base to polling to communication to finances to dealing with the inevitable sea of legal issues that surround modern election law.

All of which was presented and discussed with the out-of-state visitors all interested in executing some version of CAP in their own states — if they weren’t already active on that front, as most of them were. The idea of it all was — ideas. Ideas that lead to action. Not unlike the original 1774 meeting in Carpenters’ Hall

There is plenty of reason for all of this. On top of the Iron Triangle fights that are standard features in state capitals, as if that weren’t enough the rise of socialism that has gripped the American Left and the Democratic Party has in fact reared its head in Pennsylvania.

The 2018 elections produced two Pittsburgh area state legislators who are, exactly like New York Congresswoman Alexandria Ocasio-Cortez, members of the Democratic Socialists of America — the DSA. And tellingly, like fellow DSA member AOC, they won their seats by defeating incumbent non-socialist Democrats in the primary. Notably the co-chair of the Pittsburgh DSA chapter said this after the results were in: “We’re turning the state the right shade of red tonight.” Meaning, the “right shade of red” as that which once was the symbol of Communism. You can’t make it up.

Perhaps one of the ironies of the rise of socialism is that, as was crystal clear from this 2019 meeting in Carpenters’ Hall, more and more Americans are standing up for capitalism — and eager to take on not just socialism but those Republicans and Democrats in their state legislatures who are seen as part of the Iron Triangle problem, using the legislature as an opportunity to spend an entire career on the state payroll — and when leaving taking a considerable taxpayer-funded retirement.

In 1774, Patrick Henry took the floor in Carpenters’ Hall to say this:

“The distinction between Virginians, Pennsylvanians, New Yorkers and New Englanders are no more. I am not a Virginian, but an American.”

It is safe to say that was very much the same sentiment in this CAP meeting that was taking place a full 245 years after that first gathering of delegates in Carpenters’ Hall. There are growing numbers of Americans — as was evident in the victory of Donald Trump in 2016 — who have had it with the status quo of the nation’s political class. They are prepared to step up and fight back — and most importantly, they are determined to win.