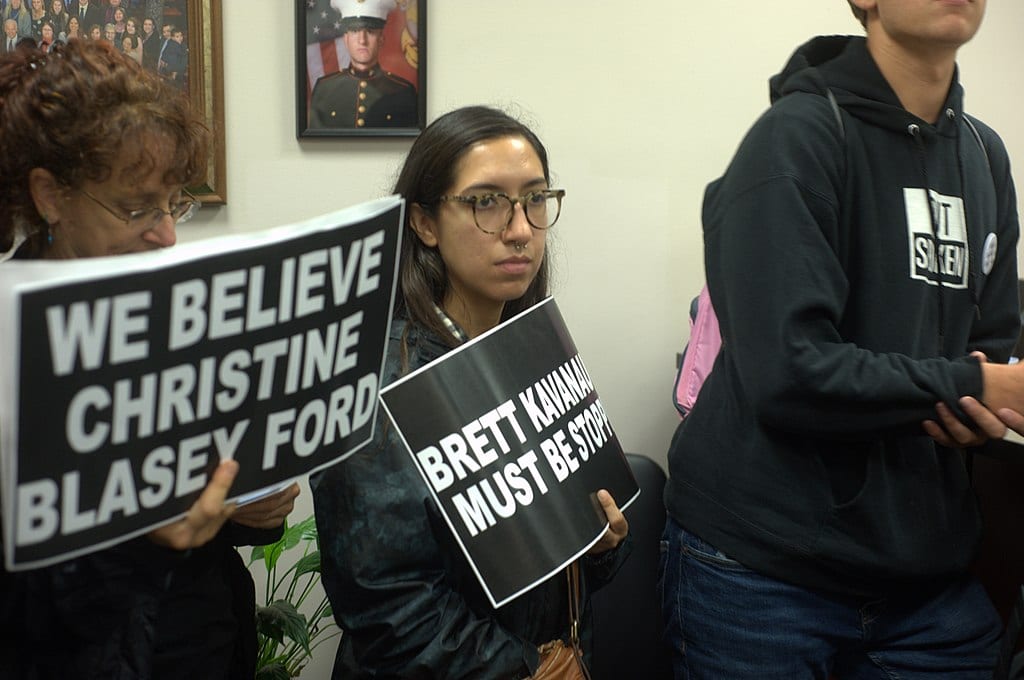 My earnest sympathies, at this point, are with both Ford and Kavanaugh, but they are not with the pro-choice Democrats and liberals reflexively backing Ford and reflexively excoriating Brett Kavanaugh as a presumed-guilty sex abuser.

The Senate Democrats and abortion lobby opposing Kavanaugh vowed to oppose him long before Christine Blasey Ford came forward. Her allegations merely gave them ammunition for a character assassination (rightly or wrongly earned) to further back their pre-determined vote against Kavanaugh from the outset. Three weeks ago, before the public heard of Ford, nearly all Senate Democrats announced their intention to vote against him. And why? We all know the reason. There’s not a liberal or conservative in Washington who doesn’t know the reason.

And therein lies something sick, perverse, wicked about the “pro-choice” left’s castigation of Brett Kavanaugh as an abuser. What Kavanaugh was accused by Ford of doing when they were teenagers — forcing himself upon her, covering her mouth, with her fearful of being raped — is an abusive act we all condemn and abhor. I’m the same age as Ford, and if I ever saw a guy doing that to a girl at a party, I would have been the first to pounce on the dirtbag. And I’d shudder to imagine him one day sitting on the U.S. Supreme Court.

The pro-life position views unborn children as precious, innocent, and worthy of our intervention and protection. Pro-lifers defend the sanctity and dignity of each life in the womb. They seek to stop violence against unborn babies.

The pro-choice position, to the contrary, does not. It allows for — and, in fact, relentlessly fights for — the “right” of a mother and an abortionist to rip apart an unborn baby in the most destructive way imaginable, often into the third trimester.

A lot of people were crying when they listened to Christine Blasey Ford describe what she claimed happened to her: the pinning down on the bed, the escape from the clutches of her attackers, her “pinballing” (as she described it) down the stairwell, her dash outside, her never forgetting the cruel laughs of the attackers.

It’s indeed very sad. Well, here’s a newsflash: If a national audience of tens of millions of Americans sat and listened to a blow-by-blow description of what happens to an innocent child during an abortion, well, they would be more than weeping. They would be sobbing. They’d be in agony, asking how a supposedly humane country and culture could continue to permit such mass injustice. Why do you think liberal newspaper editors refuse to show even a cartoon rendering of a partial-birth abortion?

Both acts of violence are heart-wrenching: against Ford, against some 60 million aborted babies in America since Roe v. Wade.

And yet, it is the latter — the feminist left’s holy grail, Roe v. Wade — that Ford’s most ardent defenders, and Kavanaugh’s most vociferous detractors, are seeking to protect and preserve at all costs. As they demand the protection of victims of sexual abuse, they also demand the preservation of abortion. They seek to undermine Kavanaugh in order to maintain Roe. To borrow from Nancy Pelosi, this is “sacred ground.” Abortion, abortion, abortion.

“The greatest destroyer of love and peace is abortion,” said Mother Teresa. “By abortion, the mother does not learn to love, but kills even her own child to solve her problems.” Abortion “is really a war against the child, and I hate the killing of the innocent child, murder by the mother herself. And if we accept that the mother can kill even her own child, how can we tell other people not to kill one another?… Any country that accepts abortion is not teaching its people to love one another but to use violence to get what they want.”

And yet, and yet, that is ultimately what the political left and the Senate Democrats are battling for in resisting not just Brett Kavanaugh for the high court but each and every pro-lifer who will sit before the Judiciary Committee. They will continue to oppose all pro-life Supreme Court nominees, regardless of any alleged incidence of sex abuse in their background. And they will do so in the name of the single greatest abuse of unborn children in the history of America: Roe v. Wade.

Liberals, your opposition to violence in the ultimate cause of continuing the violence of abortion — long before and after Brett Kavanaugh — rings rather hypocritical.