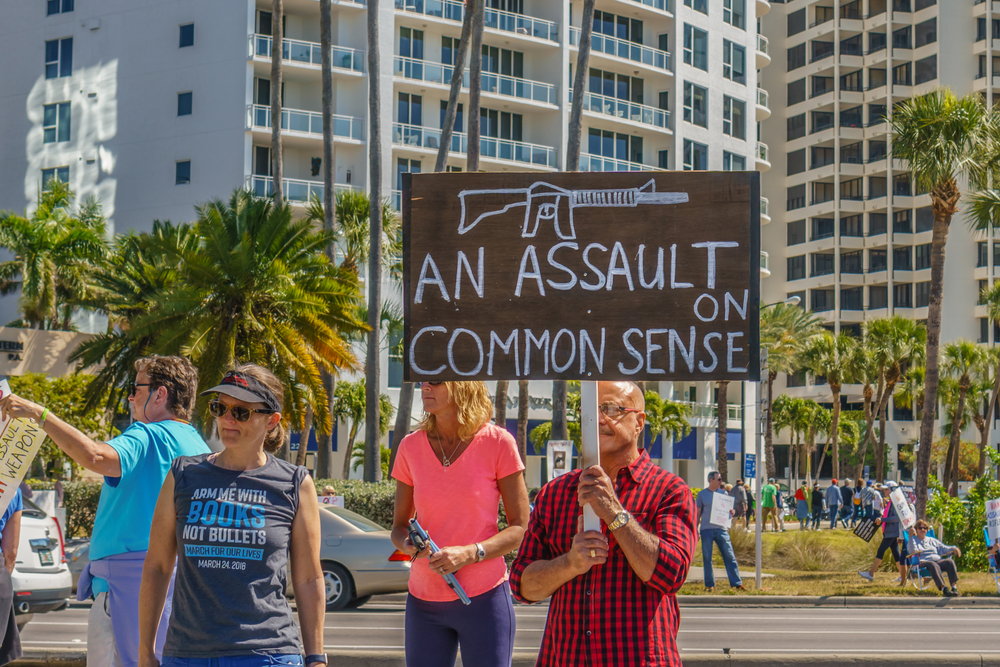 Last week’s events reminded us of how fragile our constitutional rights are and how the Left is working tirelessly to destroy them.

President Biden, announcing his first round of gun control executive orders and legislative proposals, said that “no Amendment is absolute.” In three words, he stated his — and his fellow travelers’ – theory of government, which is to eradicate the Constitution’s Bill of Rights as quickly as possible. As we’ll see in a moment, his statement is at least partially correct.

California Gov. Gavin Nuisance had imposed COVID restrictions on religious gatherings, such as prayer groups and bible studies, in people’s homes. The Supreme Court overturned a Ninth Circus decision upholding those limits because they obviously are a violation of the First Amendment.

But the SCOTUS vote was 5-4, with Chief Justice John Roberts joining the liberal minority yet again. Religious liberty, and the rest of the Bill of Rights, is apparently only as healthy as Justices Clarence Thomas and Samuel Alito.

Biden’s most powerful fellow travelers (or is it those leading him?) are doing their level best to end free speech for conservatives. Some of the most prominent are social media companies such as Twitter and Facebook, which block conservatives’ posts and sometimes ban them entirely.

That practice took a predictable turn last week when Rep. Alexandria Cutie-Cortez sent an email to supporters asking them to report any “misleading” information about her to Twitter and Facebook so that the posts can be suppressed:

Scan your social media to find posts with this misleading information, especially those using the trending hashtag. Don’t tweet any hashtags yourself, because we don’t want to spread them further! Identify any posts that are threatening or harassing and use the built-in report features to flag them for moderators. Facebook and Twitter both have built in tools for reporting posts and tweets that break the rules.

Suppression of free speech? Of course it is, and the hyper-libs such as AOC are encouraging it.

President Biden laid out his first set of gun control executive actions and legislative proposals on Thursday. Biden’s announcements coincidentally came on Holocaust Remembrance Day, which should remind everyone what can happen to a population that is disarmed.

In Biden’s little speech, he repeatedly confused the ATF — the federal bureau of Alcohol, Tobacco and Firearms — with the AFT, the American Federation of Teachers union, one of his most fervent supporters (and generous donors).

It reminded me of a scene from Without a Clue in which the exasperated Doctor Watson (Ben Kingsley) has to remind the drunken idiot he hired to create the character Sherlock Holmes (Michael Caine) that there is a difference between a mambo and a mamba, one being a festive Caribbean dance and the other being a deadly poisonous snake.

Biden wants an assault weapons ban and is asking either AFT or ATF for new regulations on “ghost guns” — which sound scary but are simply guns assembled from parts that have to be drilled or otherwise machined and have no serial numbers — and arm braces for AR-15 style pistols. Biden wants background checks on the former and registration of the latter. He also wants another “assault weapons ban,” which had no measurable effect on murders committed with such guns and which cannot be created without legislation.

Biden’s statement that the Second Amendment is not absolute is correct. The National Firearms Act of 1934 made the further manufacture or possession of fully automatic firearms and other weapons such as short-barreled rifles and shotguns a crime unless they are registered and a tax paid on them. Biden’s attempted extension of that act to pistol braces — which Attorney General Merrick Garland has said make them function as short-barreled rifles — should have to be done by legislation, not regulation, but it can’t be now because the Senate is barely in Democrat hands and one senator — Joe Manchin of West Virginia — won’t support it.

Two other Bill of Rights amendments are implicated in Biden’s nascent anti-gun crusade: the Fourth Amendment’s ban on unreasonable search and seizure and the Fifth Amendment’s due process requirement. Both are threatened by Biden’s request that Congress pass a national “red flag” law and that the Justice Department draft a standard one for states to adopt.

The “red flag” laws, we must remember, are state laws that enable the police to seize a person’s firearms on the basis of a complaint by police or a family member that the gun owner is insane or otherwise a danger to the community. A court may order seizure of the guns on an “ex parte” basis, meaning that the gun owner is neither present nor represented in court. That violates both the Fourth and Fifth Amendments.

There are three or four million pistol braces in Americans’ hands, and each owner would become a felon were the regulation to be issued.

As I wrote earlier in The American Spectator, the only senator standing in the way of an assault weapons ban and other serious erosions of the Second Amendment is Manchin, who is also the only Democrat publicly opposed to stopping Chuck Schumer from repealing the Senate’s filibuster rule, which prevents the senate from being a rubber stamp for Wile E. Pelosi and her radical House crew.

Let’s wish Manchin good health and hope he doesn’t retire from the Senate to run for governor in his state.

Biden and his cohort haven’t yet attacked the rest of the Bill of Rights, but they only need the opportunities to do so. Meanwhile, we can be sure that whatever the result of his first attacks on the Second Amendment, there will be many more to come.