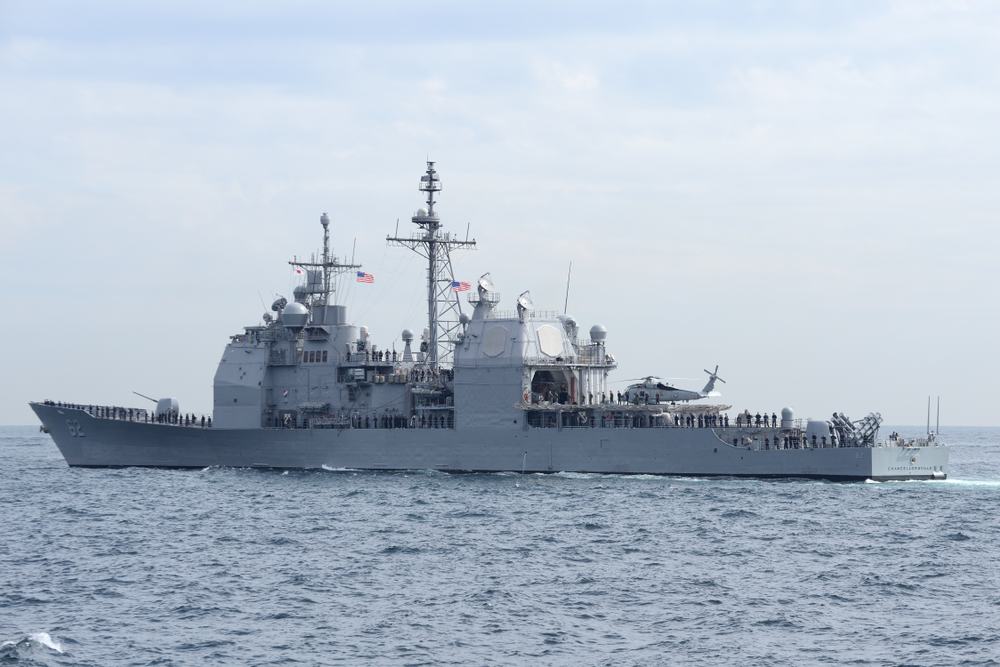 The Biden Defense Department’s Orwellian “Naming Commission,” created by Congress in 2021, has recommended that the Navy Department rename the Ticonderoga-class guided-missile cruiser USS Chancellorsville, which recently transited the dangerous Taiwan Strait, because it memorializes the Confederate victory at Chancellorsville in Virginia, in May 1863. Woke Navy Secretary Carlos Del Toro, who has declared that a top priority for the department is climate change, will rename the warship, according to the Military Times.

The commission considered renaming the cruiser USS Antietam as well, but it decided that, despite the greater Union casualties at that battle, historians consider it a Union victory because its troops held the field at the end of the battle.

The USS Chancellorsville was launched on July 15, 1988, and has a storied history, including deployment to the Persian Gulf during Operation Desert Storm in 1991, participation in strikes on Iraqi targets in 1993, provision of support to counter-narcotics operations in the Caribbean Sea in 1997, deployment in support of Operation Enduring Freedom in September 2001, and previous transits of the Taiwan Strait in 2019 and 2020.

Retired Army Brig. Gen. Ty Seidule, who serves as vice-chairman of the Naming Commission, said, “There will not be another element, another asset that will commemorate the Confederacy or those who voluntarily served … in the Confederacy.”

A painting of Confederate Gens. Robert E. Lee and Thomas “Stonewall” Jackson was removed from the ship’s wardroom in 2016.

Politico reports that some in the Navy have criticized the renaming of the Chancellorsville, which is due to be retired in 2026. “There is very little precedent of a ship that’s been in active service, especially for a number of decades, to have its name changed,” said a retired Navy captain. An African-American retired lieutenant commander accused the U.S. military of going “whole-hog on cancel culture.”

With the United States military’s cancel culture running rampant and with the Thomas Jefferson Foundation at Monticello and the National Trust for Historic Preservation at James Madison’s Montpelier home becoming woke by focusing on slavery over all else, can the National Park Service be far behind? If it is so important to cancel anything that commemorates Confederate victories in the American Civil War, perhaps the park service will close the historic battlefield sites at Chancellorsville, Fredericksburg, Manassas (First and Second Bull Run), Chickamauga, Richmond (the Seven Days Battles), Harpers Ferry, and Kennesaw Mountain. After all, these national parks, more than any other monuments, commemorate Confederate victories. (READ MORE from Francis P. Sempa: Biden’s 2023 Navy Budget Request Increases Our Geopolitical Peril)

Of course, books and articles, too, commemorate Confederate victories, and many of those books and articles praise the military and strategic acumen of Lee and Jackson. Should they go, too? The United States Military Academy will be renaming anything on its campus currently named for Confederate soldiers, especially Lee, one of the institution’s greatest cadets. Remember the words of the Naming Commission’s vice-chairman: “There will not be another element, another asset that will commemorate the Confederacy or those who voluntarily served … in the Confederacy.”

In George Orwell’s Nineteen Eighty-Four, there are echoes of today’s cancel culture:

Every record has been destroyed or falsified, every book rewritten, every picture has been repainted, every statue and street building has been renamed, every date has been altered. And the process is continuing day by day and minute by minute. History has stopped. Nothing exists except an endless present in which the Party is always right.