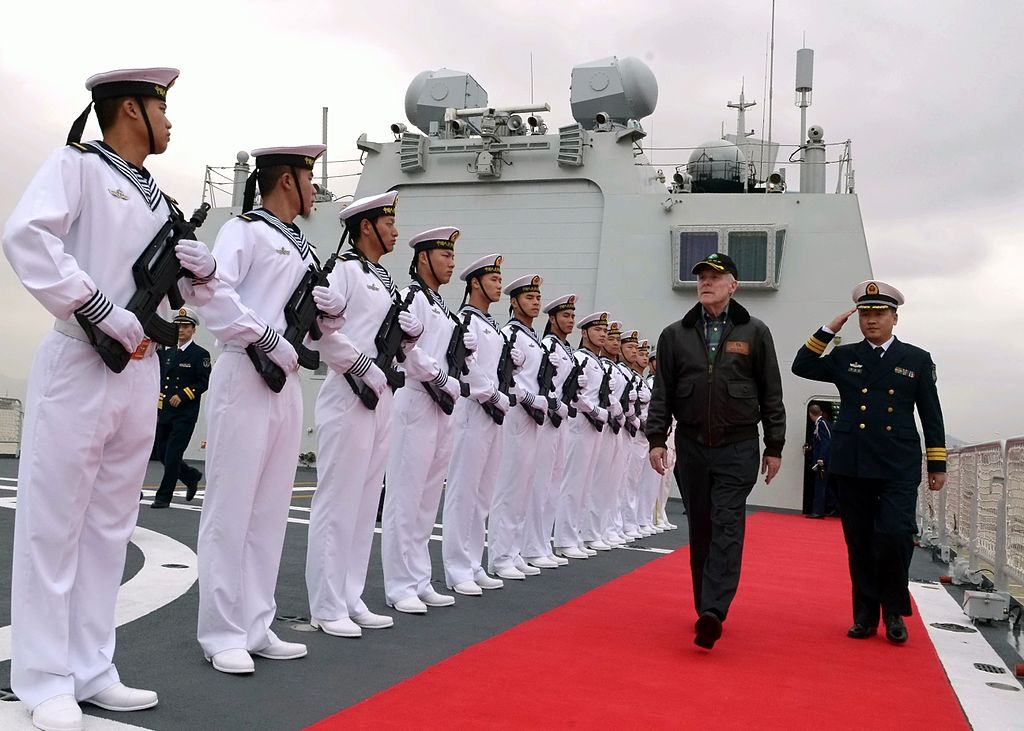 The Biden administration has requested funding for nine additional ships for the U.S. Navy in the 2023 fiscal year budget, but it also plans to retire 24 ships. In the next five years, the Navy is projected to reduce its fleet from 298 ships to 280. It is also proposing to decrease the number of sailors by 10,000 over the next five years. And its total budget request for the Navy, even though it would represent a 5 percent growth compared to fiscal year 2022’s spending, still falls short of inflation and therefore is effectively a defense cut.

The Heritage Foundation notes that Biden’s budget request for the Navy “trashes” Congress’ stated requirement in the Fiscal Year 2018 National Defense Authorization Act that the Navy increase its fleet to 355 ships by the middle of the next decade.

Biden’s budget request is also a far cry from the Trump administration’s plan to build 82 new ships by 2026 with a goal of reaching a 500-ship Navy by 2045, according to the Congressional Research Service’s August 25, 2022, report on Navy Force Structure and Shipbuilding Plans: Background and Issues for Congress.

Last September, a serving naval officer wrote a piece in the National Interest that expresses concern that the Navy’s budget did not meet its strategy. “Without a larger and lethal fleet,” Nick Danby states, “the Navy cannot realize its ‘distributed lethality’ operational concept, which necessitates more ships.” Danby is quite blunt: A smaller fleet means “China handily defeating the United States in Taiwan—and elsewhere.” And former deputy undersecretary of the Navy Seth Cropsey wrote earlier this year that “[a] more inopportune time to cut the fleet cannot be imagined, especially because a conflict in the West Pacific would be chiefly a naval/amphibious one.”

Prioritizing the Navy is simply a matter of sound geopolitics. Strategists from Alfred Thayer Mahan to Colin S. Gray to, more recently, Toshi Yoshihara and James R. Holmes have understood that, geopolitically, America is an island nation whose national security and economic well-being depend on dominant naval power — what Mahan called “command of the sea.” To wage effective war at sea and in Eurasia and its littoral territory, America must enjoy naval-air mastery, Gray writes in Seapower and Strategy (1989). And a few years later, Gray wrote an entire book to show that “[g]reat sea powers or maritime coalitions have either won or, occasionally, drawn every major war in modern history” (The Leverage of Sea Power). Yoshihara and Holmes have authored two outstanding books on the Chinese naval threat: Chinese Naval Strategy in the 21st Century: The Turn to Mahan (2007) and Red Star Over the Pacific: China’s Rise and the Challenge to U.S. Maritime Strategy (2010).

Yoshihara is a contributor to a recent Center for Strategic and Budgetary Assessment (CSBA) study that warns that China’s plan is to consolidate its power regionally, then expand globally.

To accomplish this, China is expected to field five aircraft carriers and up to 10 nuclear ballistic missile submarines by 2030. The CSBA report urges America and its allies to “prepare to face a China that poses both a regional and, increasingly, a global military threat.” Yoshihara and his colleagues urge U.S. policymakers to compete with China militarily, but also in other domains, such as finance, technology, trade, and politics. The United States, the report concludes, must adequately “prepare for the greatest strategic challenge of our era for years to come.”

Holmes, a professor of maritime strategy at the Naval War College, has written a series of articles for the online journal 19FortyFive on the need to build more warships to effectively contain China and, if necessary, defeat China in a war in the western Pacific.

According to the Navy Times, China today has at least 360 warships compared to the American fleet of 297 ships — which Biden plans to cut to 280 ships. The Japan Times recently reported that “the steady growth and modernization of China’s naval fleet is fueling concerns about how Beijing could use what is already the world’s largest navy in a move against [Taiwan].” And China has the crucial advantage of geography in the South China Sea and the entire Indo-Pacific region.

We are in a new cold war with China. A few years ago, former Reagan administration Navy Secretary John Lehman wrote a book (Oceans Ventured: Winning the Cold War at Sea) that explains how Reagan used the 600-ship Navy to help defeat the Soviet Union in the first Cold War. Lehman expresses his concern that our post–Cold War naval decline “invited” today’s maritime challenges by China. We have forgotten the lessons of history, Lehman laments: “States that wish to wield global influence maintain global navies, whereas states that abandon their focus in the seas … see their power decline and their hopes fade.”