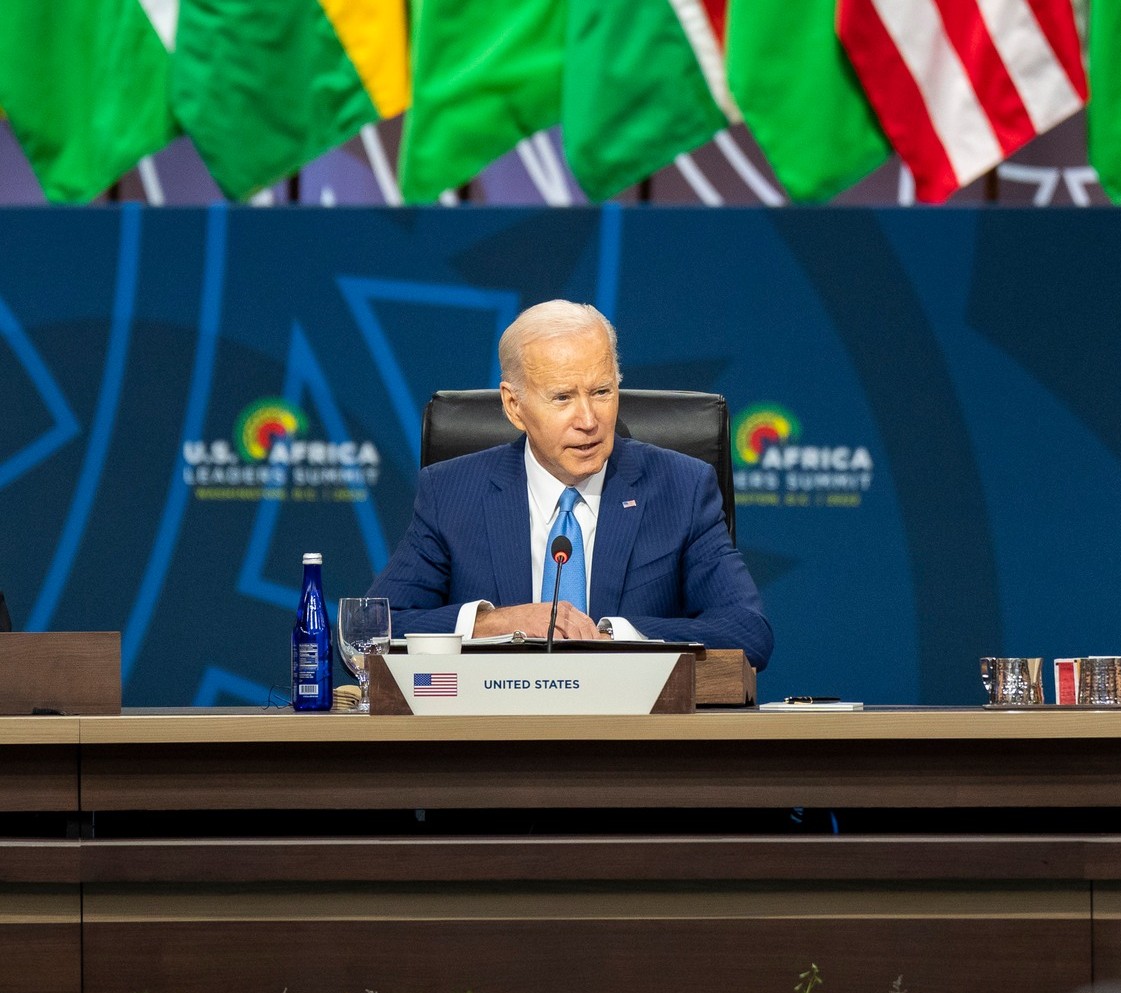 The Africa summit is mercifully over. Traffic around the Convention Center in Washington, D.C., is back to normal. More importantly, U.S. officials can stop pretending Africa is a vital security battleground requiring copious false praise, ritualistic self-criticism, and enormous taxpayer transfers.

Fear of the People’s Republic of China has become the excuse for any and all bad policies in Washington. Whatever the expenditure or regulation, claim that it helps the battle against Xi Jinping and China’s communist hordes, and it will receive congressional authorization, presidential action, and popular acclaim.

Such was the case with the semiconductor chip bill, advanced to address a serious concern but turned into a special-interest payoff for production that the U.S. dominates despite enormous wasted Chinese subsidies. Similar is President Joe Biden’s proposal to meet the PRC’s faltering Belt and Road Initiative by reviving the bad old years of Western funding of dubious governments for equally dubious projects across the developing world. A better strategy would be to encourage the world’s deadbeat nations to load up on Belt and Road Initiative projects, sticking Beijing with even more bad loans.

Beijing does pose a significant challenge to the U.S., and to the West more broadly. However, its weaknesses are manifest. Indeed, the more dictatorial Xi becomes, the greater the challenges China is likely to face. Washington is operating from a position of strength, and its response should be measured. Becoming more like the PRC in response to the PRC would make bad policy even worse.

Yet the Biden administration continues its craven approach to other nations, acting as if they, rather than America, are superpowers requiring constant flattery and subsidy. An example is Washington’s pusillanimous treatment of the Kingdom of Saudi Arabia and Crown Prince Mohammed “Slice ’n’ Dice” bin Salman. Unsurprisingly, MbS, as the killer prince is known, responded to Biden with disdain and contempt. Washington should treat the Saudi royals like any other Third World dictators, rather than like exalted beings from another galaxy.

Of course, Xi’s recent visit to Riyadh led to all sorts of wailing and gnashing of teeth from MbS’s factotums in Washington. However, the trip was Kabuki theater. China is a rising economic power, so it inevitably will do business with Saudi Arabia. After all, South Korea currently trades more with the PRC than it does with the U.S. and Japan combined. However, Seoul continues to look to the U.S., not Beijing, for security. Similarly, MbS and his pampered princely class still looks West for security. Xi certainly isn’t going to turn his nation’s soldiers into the equivalent of royal bodyguards. (Too bad. It would be nice to offload that responsibility onto some other sucker!) Washington, not Riyadh, has most of the leverage.

Africa’s situation is similar. The continent, with a growing population and economy, will become more significant geopolitically over time. However, its security significance to America will long remain limited. If Africa does pose a threat to America, the problem is weakness rather than strength, allowing terrorism to fester.

For instance, many of Africa’s 54 countries face significant internal challenges. South Sudan, Somalia, Nigeria, Libya, the Democratic Republic of the Congo, and Zimbabwe are among the states unable to manage their own affairs well. Nor is continental unity likely to become a reality, soon or, perhaps, ever. The continent is divided between North Africa and Sub-Saharan Africa; Muslim and Christian/animist; francophone, commonwealth, and other; chaotic and semi-developed. The continent is a threat mostly to itself.

The U.S. and the Soviet Union competed for the allegiance of African despots throughout the Cold War; Washington won but gained few spoils for the enormous energy and money expended. Yet last week, the Biden administration went into full suck-up mode, hosting 49 African delegations. And the president laid it on thick. First came the inevitable apology for slavery: “We remember the stolen men and women and children who were brought to our shores in chains, subjected to unimaginable cruelty. My nation’s original sin was that period.”

It was an odious practice, but, of course, we and they already knew that. Indeed, that is why the practice was abolished 150 years ago after America’s most costly conflict. Moreover, Africans were enslaved only with the complicity of Africans. That is, Biden’s audience was filled with the descendants of aggressors, kidnappers, and traders who trafficked in slavery. Engaged in the transatlantic practice were people living in present-day Angola, Benin, Cameroon, Chad, Congo, Gambia, Ghana, Mali, Nigeria, Senegal, Tanzania, and Zambia. Algeria, Egypt, and Morocco hosted the Muslim/Middle Eastern slave trade.

If the president was serious about righting historical wrongs, then he would have proposed that his guests apologize first to one another, depending on their respective nations’ tribal makeup and geographic location, and next to African Americans for having made the Atlantic slave trade possible. And then these governments would have pledged to provide reparations to the descendants of slaves, including those in America.

Of course, Biden had no such objective. He intended to blandish and bribe his guests, not enlighten them. As he declared: “[T]he United States is all in on Africa and all in with Africa. African voices, African leadership, African innovation all are critical to addressing the most pressing global challenges and to realizing the vision we all share: a world that is free, a world that is open, prosperous, and secure.”

Alas, this is utter nonsense, and he knew it. All the governments he was dealing with undoubtedly want to be secure and prosperous. However, free and open? Think again!

Although democracy has made progress in Africa, few countries are well-developed, stable, and free societies. The group Freedom House rates only eight African nations as “free”: Botswana, Cabo Verde, Ghana, Mauritius, Namibia, São Tomé and Príncipe, Seychelles, and South Africa. The rest are split evenly between “partly free” and “not free.” Although the situation is better than it was in the past, it remains awful.

So much for the administration’s democracy agenda. Little better are the prospects for raising the poorest Africans out of poverty. Economic liberty is essential for prosperity. Only two African nations, Mauritius and Cabo Verde, rank among the top 30 most economically free nations. Another three make the next 30: Botswana, Gambia, and Uganda. In contrast, 18 African states, a full third, fall within the bottom 30.

Nevertheless, Biden played Santa Claus with Americans’ money. He promised the assembled delegations $55 billion as “a comprehensive commitment from the United States to invest in Africa’s people, Africa’s infrastructure, Africa’s agriculture, Africa’s health system, Africa’s security, and more.” Next, he said, he was “asking the Congress for the authority to lend $21 billion to the International Monetary Fund to provide access to necessary financing for low- and middle-income countries — which is so difficult to come by now — and to — will help Africa’s recovery efforts and support projects that build resilience against future crises.” (Those are b’s, as in billion.) On top would be more money for governance and security.

Finally, the president said he wanted to visit. Vice President Kamala Harris would visit. So would his wife, Jill (shouldn’t that be Dr. Biden, even to him?). Finally: “Secretary Blinken is on his way. Secretary of Defense Austin. Secretary of the Treasury Yellen. Secretary of Commerce Raimondo. The USAID Administrator, Power. And our Ambassador to the United Nations, Linda Thomas-Greenfield. Promise you’ll send them back. Promise you’ll send them back. I need them. They all want to go, but I’m worried they won’t come home.”

Actually, if the president wouldn’t mind, could we keep our money and let the Africans have this gaggle of Biden attendants and lackeys instead?

Particularly unseemly has been the administration’s slavish attention to Equatorial Guinea, thought to be the possible site of a Chinese military base. Reports Foreign Policy, “Since Washington first caught wind of China’s ambitions to build a naval base in the Atlantic last year, current and former officials said, a series of top U.S. diplomats, intelligence officers, and White House officials have visited Equatorial Guinea to meet with [President Teodoro Obiang Nguema Mbasogo] and his top aides.”

The prospect of the PRC basing some ships in West Africa poses no crisis. In fact, it’s probably best for America that China divide its fleet and siphon fighting power away from the Asia-Pacific. Moreover, a Chinese presence would allow Europe to demonstrate its new supposed commitment to constraining Beijing. In order to most help America, the European members of NATO should take over responsibility for confronting Russia rather than send token forces to the Pacific. Patrolling West African waters would be a natural outgrowth of securing the continent.

Freedom House rates Equatorial Guinea as 5 out of 100, in bottom-feeding North Korea/Eritrea territory and worse than China, Iran, and Russia. Details Freedom House: “The current president, who took power in a military coup that deposed his uncle, has led a highly repressive authoritarian regime since 1979. Oil wealth and political power are concentrated in the hands of the president’s family. The government frequently detains the few opposition politicians in the country, cracks down on civil society groups, and censors journalists. The judiciary is under presidential control, and security forces engage in torture and other violence with impunity.”

Alas, trying to buy the allegiance of Obiang creates a potentially unlimited bidding war with Beijing. The people of Equatorial Guinea would be the primary victims, followed by American taxpayers. Washington played this game throughout the Cold War with ugly consequences all around. Obiang would likely prove to be a poor investment. There is no reason to believe that he would stay bought. Moreover, the spectacle of the U.S. spending wildly to thwart what today looks like merely a possibility would encourage other African governments to announce that they were “considering” offering base rights to China and then to head to Washington to negotiate for booty to reverse their “decision.”

Americans should be engaged in Africa. However, they can’t afford yet another open-ended financial commitment by Washington for benefits more imaginary than real. If Beijing wants to risk its fiscal future subsidizing even more authoritarian developing countries, Washington should stay out of the way.

Doug Bandow is a senior fellow at the Cato Institute. A former special assistant to President Ronald Reagan, he is author of Foreign Follies: America’s New Global Empire.