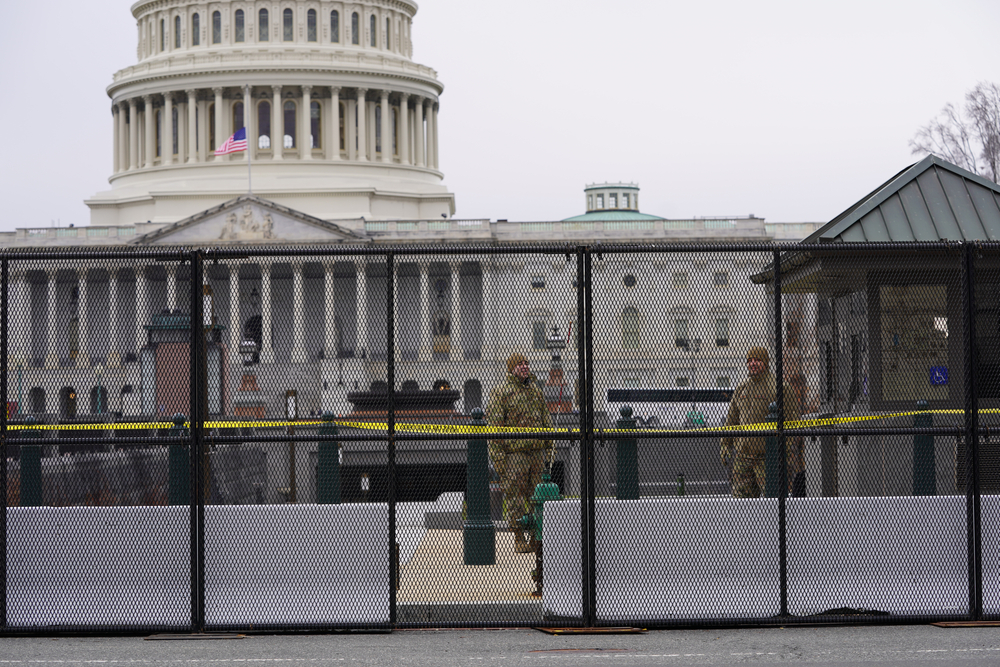 Here’s something you already know: Joe Biden doesn’t need 26,000 National Guard troops to protect him from Proud Boys at his inauguration.

Four years ago, the Department of Homeland Security mobilized 7,800 National Guardsmen for Donald Trump’s inauguration. At the time there were some 99 left-wing outfits proclaiming they would demonstrate to protest the Trump inauguration.

Those protests turned into riots. The Left looted stores around Washington and made a mess. Few were arrested.

These people demand obedience, not unity.

There is no credible threat made to Biden’s inauguration. While Trump drew the better part of a million people visiting Washington for his inauguration, Biden will barely draw flies. His inauguration is set to be a sedate, undistinguished affair just like all of his campaign events were. Perhaps there might be a few hecklers.

And maybe that’s why there is a larger military presence in Washington, D.C., this week than at any time during the Civil War, when Gen. Lee and his army repeatedly threatened the capital.

That message is: We’re in control, and we don’t care if you like it or not. Shut up and sit down if you know what’s good for you.

Those troops serve a political purpose. They show that the people who control Joe Biden have no qualms about using the military to practice violence upon a truculent population.

These people glorified violence when it was Antifa and Black Lives Matter in the streets looting and burning businesses and killing Americans like David Dorn. They had no use for the National Guard then, when by any practical definition it was a reasonable deployment of force.

And don’t start with the Capitol riot, which these people insist on terming an “insurrection.” In Seattle, when a bunch of Antifa radicals declared their own little Paris Commune separate from the city, state, and federal government, that was an insurrection. The instigators and Q fans who led the way into the Capitol, most of whom did it for s**ts, giggles, and selfies, had no interest whatever in overturning the U.S. government. Most of them would probably tell you their purpose was to uphold the Constitution against a stolen election, not to foment a coup of some kind.

We now know that riot was planned in advance, and of course it was, and there’s a good bit of evidence that at least some of it was a false flag operation. But the same people being blamed, fairly or not, for the Capitol riot are begging people to stay away from Washington, and their own state capitols, for the inauguration.

And yet there are 26,000 National Guardsmen, guns raised, patrolling our nation’s capital in search of “white supremacists.” Those Guardsmen are themselves being subjected to a political purge, because, as the dregs of the political class like Rep. Steve Cohen of Tennessee have said, most of them are white men and white men mostly voted for Trump. Two have been sent home already due to having been outed as members of some militia group or other.

Perhaps next they’ll have people embedded in their units to do the vetting. We all know how well having political officers works for military morale, after all; it was really fantastic for the Soviets.

It isn’t just the Guardsmen. It’s the authoritarian demands for political purges within Congress, where Ted Cruz and Josh Hawley, among others, are accused of “sedition.” Hawley found himself canceled out of a Simon & Schuster book contract, though he quickly landed on his feet with one from Regnery.

It’s also the Big Tech tyranny, which shows zero sign of slowing down (and which you can fight back from by checking out this thing).

It’s Biden’s announcements of a full-on war against the oil and gas industry, with promises to “decarbonize” the economy. That’s a pretty wide-open bit of sedition in its own right, seeing as though any attempt to “decarbonize” is doomed to fail and by destroying the domestic supply capacity all he’s doing is putting America back under the thumb of foreign scumbags after decades of misery had been dissolved under his predecessor. Look for the needless wars in the Middle East and elsewhere to follow.

The Russians, who will take over as the world’s largest oil producer at a higher price than ever, will surely enjoy that. So will China, whose state-run oil interests might do for the energy industry what the ChiComs have done for flip-flops and microchips — particularly as they buy up oil fields in the Third World for dirt-cheap prices.

It’s his insane decision to inflict “Rachel” Levine, the faux female health secretary of Pennsylvania, as his new assistant HHS secretary. Levine isn’t best known as a transgender person but for stocking the Keystone State’s nursing homes with COVID patients and causing thousands of deaths. Meanwhile, Levine’s aged mother was moved out of one. In an administration actually seeking to provide the best-quality service to the voting and tax-paying public, such a person would never be hired; in a Biden administration failing up is the new ethic.

What undergirds it all is contempt. Reeking, rock-solid, blazingly hot contempt for the American people.

A president who fairly wins an election doesn’t act this way. A president who truly means it when he babbles on about unity seeks to placate those who opposed him, to find common ground. Biden drags a collection of Obama retreads still dirty from the FISAgate plot and the Trump–Russia hoax back into his administration. He signals the southern border is open and the wall will come down while building walls of barbed wire in the capital city. His people work to keep Trump supporters off airline flights, to boycott their businesses. They talk about “deprogramming” the Republican Party. Inside the D.C. swamp, the Republican possums and alligators slink back to their usual habits as “pet” conservatives while sexual predators like John Weaver, funded by the Left, vow to destroy Trump’s influence within a party more than 90 percent of whose voters still believe in his agenda.

None of it will produce unity. None of it is intended to. These people demand obedience, not unity. And they demand it blind — and unearned. Or else.

The people who control Biden are busy working to lock up dissidents in every way they can — politically, financially, technologically, and maybe even literally. The barbed-wire curtain they’ve built in the capital city and online is only the beginning.