by George Neumayr
A sign pronounces support for a constitutional amendment to proclaim that a right to an abortion is not part of the Kansas Constitution (YouTube/Democracy Now!) 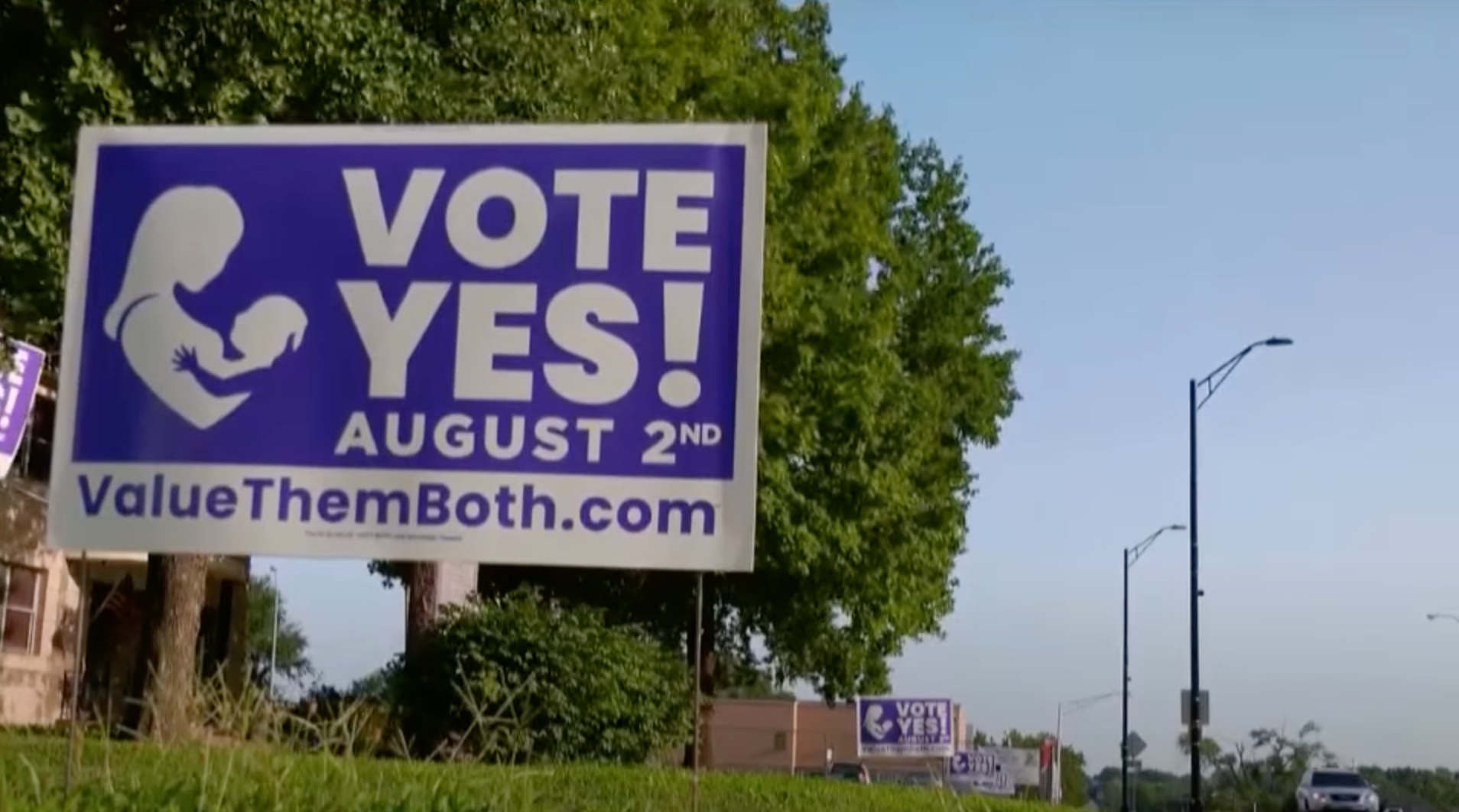 The defeat of a pro-life amendment in Kansas has confirmed the Democrats in their pro-abortion zealotry. As Kansas goes, they assume, so goes the nation. But is that true? No, it appears that at least half the states will adopt restrictions on abortion of one kind or another. Doesn’t that pose a political problem for a party that is resolutely and almost universally pro-abortion? Won’t the Democrats have to moderate in order to compete in those states? Since the Dobbs decision, they have shown no inclination to do so. If anything, their fervor for abortion has grown more fanatical.

The Democrats are overinterpreting the results in Kansas. It is a setback for pro-lifers, to be sure, but it is not that shocking. Kansas, after all, is a state that not so long ago elevated to its governorship Kathleen Sebelius, a darling of Planned Parenthood and architect of President Barack Obama’s contraceptive mandate. Insofar as their victory in Kansas makes the Democrats complacently and stubbornly pro-abortion, it will not help them in the fall elections. They whine endlessly about the GOP’s “extremism,” but it is their own lack of moderation that has put them in political peril.

The mood in the party is one of extreme intolerance toward any Democrat who betrays even the slightest ambivalence about abortion. President Joe Biden, who earlier in his career expressed misgivings about abortion absolutism, now encourages it. For many years, he supported the Hyde Amendment’s prohibition on taxpayer funding of abortion. But this week he announced that he wants taxpayers to pay for the out-of-state abortions of Medicaid patients. (READ MORE: Biden’s Unholy Crusade for Abortion)

In North Dakota, a pro-life Democrat managed to win a primary for a congressional seat. But some of his fellow Democrats favor disowning him. So it goes in many states, according to Politico, which says that “Democrats are turning on Democrats over abortion.” Democratic primaries have become referendums on which candidate is most intensely committed to abortion.

The dominant media, of course, obsesses over the political implications of the Dobbs decision for the GOP and always provides a platform for liberal Republicans who dissent from the party’s pro-life plank. But that same media refuses to give any exposure to pro-life dissenters within the Democratic Party and bars any discussion of the political costs the party pays for its pro-abortion dogmatism. Pundits on CNN and MSNBC are forever throwing out poll numbers about the American people’s “support for abortion,” while never mentioning that those same polls show support for restrictions on it. Moreover, if the American people favor abortion so strongly, why is it that abortion centers are closing left and right?

“At least 43 abortion clinics have shut their doors in the 30 days since the US Supreme Court overturned Roe v. Wade in June, according to new research,” reports CNN. How does that square with its commentariat’s cocky assessment of the American people as overwhelmingly and permanently pro-abortion? True, Americans do appear more pro-abortion than pro-life, but the Democrats and the liberal chattering class are still overplaying their hand and assume wrongly that maximalist abortion politics is a “potent” issue for their side. Had Biden retained a more ambiguous stance on abortion and not become a puppet of Planned Parenthood, the Democrats would be less politically exposed.

The decision to run pro-lifers out of the party — which goes back to 1992 and the party’s boycotting of pro-life Pennsylvania Gov. Bob Casey Sr. from its convention — has made Democrats less competitive in the South and parts of the Midwest. That problem can only grow as the party’s abortion litmus tests tighten even more in the wake of the Dobbs decision. The party’s hold on Hispanic voters, particularly evangelical ones, is fast weakening as it doubles down on woke immorality. The results in Kansas may lull the Democrats into a false sense of confidence at the very moment they desperately need to consider adjustments to their doctrinaire politics.

Their aversion to centrism is based in part on a refusal to admit that America is an ideologically divided country. The days of triangulation that defeat in Congress forced on Bill Clinton are long gone. Even if the Democrats get wiped out in the fall, they will still regard half the country as “deplorables” unworthy of any understanding.

All the political gravity in the party lies on the far left, as evident in the extreme remarks of Biden and Vice President Kamala Harris whenever a defining ideological issue arises. Can anyone imagine the equivalent of Bob Casey Sr. speaking at the 2024 Democratic National Convention? Not a chance. Most of Biden’s promises have gone unfulfilled — his babble about “unifying” the country chief among them — but he has kept one promise: to be the “most progressive president in history.” As a consequence of that renunciation of moderation, Biden’s party, notwithstanding the outcome in Kansas, will soon suffer a trouncing.