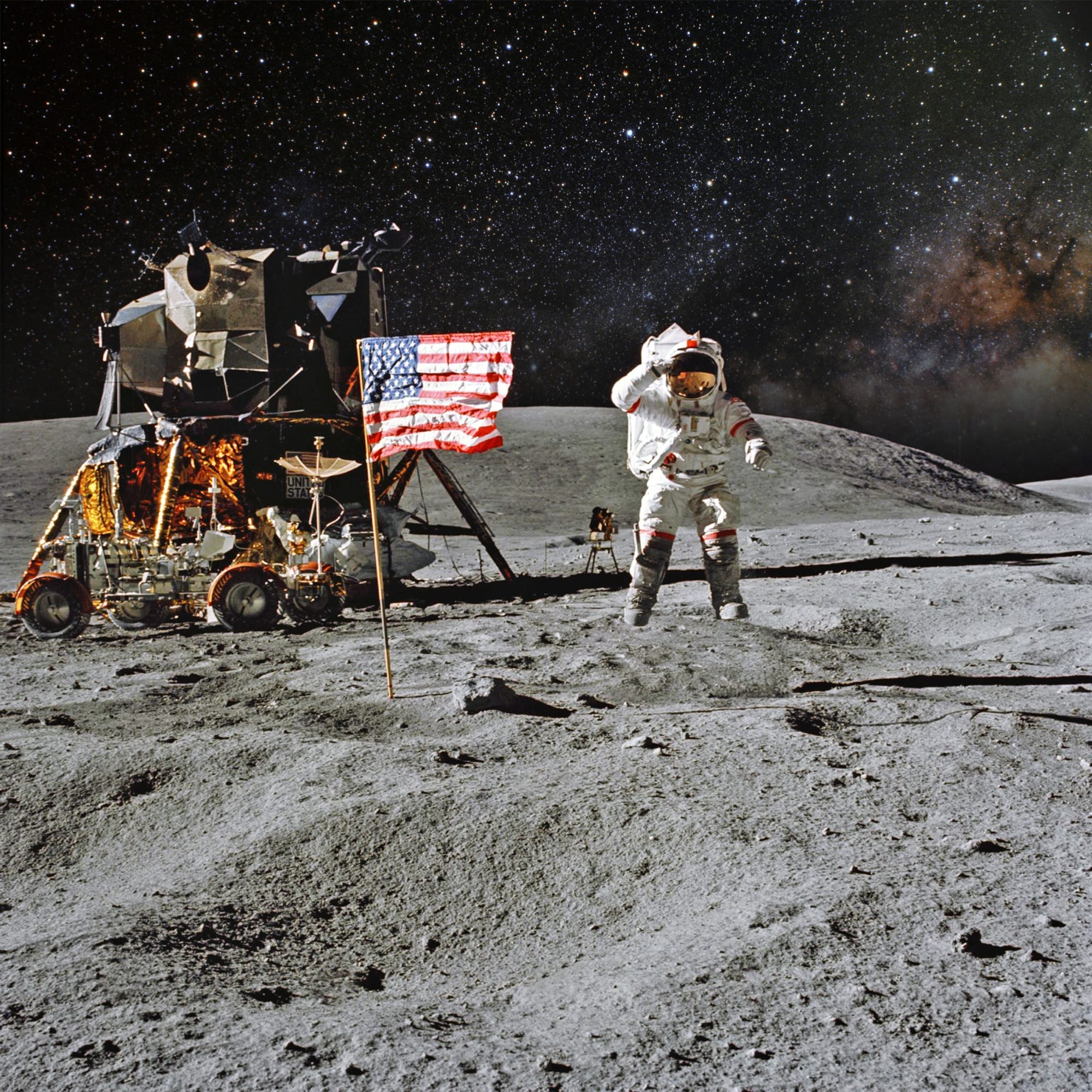 Fifty years ago tonight, there were about 200 of us crowded around a small black and white television set at Otis Air Force Base, Massachusetts. We were Air Force ROTC cadets attending the four-week summer camp between our junior and senior years of college. Our training officers, also in the crowd, let us stay up late to watch the moon landing because it was the most important event in anyone’s imagination.

There was huge tension in the room while the lunar landing module — “the Eagle” — was finding a place to land. We knew the guys aboard would have to abort the landing any second because they needed to have enough fuel left to get back to the command module for the trip home.

When the Eagle touched down, we all let out a cheer. When Neil Armstrong descended the lander’s stairs and set the first human foot on the moon — “One small step for man. One giant leap for mankind” — there were shouts and cheers, and our two Citadel guys let out what they thought was a rebel yell.

For that moment, we managed to forget how truly awful the 1960s were. We are Americans, we thought: by definition the good guys. And, despite everything else going on in the world, we made it to the moon before anybody else. We felt enormous pride in Neil Armstrong, Buzz Aldrin, and Michael Collins, in NASA and in our country.

The terrible events that surrounded us in the 1960s weren’t easy to set aside for even a minute. They began with the assassination of President Kennedy in 1963, which was still in the back of our minds.

The year before the moon landing — 1968 — was a terrible year by any standard. The year began with the Tet Offensive in Vietnam in January, which killed about 4,000 Americans. For about a week it appeared that the Vietnam War was lost. But it went on and on, with about 500 Americans being killed every week. All of us wanted to be pilots or at least navigators, and either job was a quick ticket to ’Nam after graduation.

America seemed to be tearing itself apart. Then came the presidential election, which was enormously frustrating because most of us weren’t 21 yet and thus were too young to vote. The vote wasn’t extended to 18-year-olds until the next election.

A few days before the landing, we’d missed the Apollo 11 launch and wished we hadn’t. Apollo 11 had sat atop the awesome Saturn V three-stage rocket, which stood over 360 feet tall. (Its chief designer was Wernher von Braun. Remember the scene from The Right Stuff when the NASA guy insisted that “Our Germans are better than their Germans”? They were.)

When the Saturn V was launched, it reportedly made the second loudest man-made sound ever. Only the detonation of an atomic bomb was louder. Every Saturn V launch shook the ground for miles around.

We all felt a bit sorry for Michael Collins. Armstrong and Aldrin got to walk on the moon and raise the American flag there while Collins waited in the command module that would, we hoped, return the three to earth safely. Every one of us wished he could trade places with one of the moon walkers.

We all talked about nothing else for the next several days. The science fiction we’d grown up with had — in part — become fact. NASA was televising pretty much everything from the moon but we missed it because we were doing pushups, running and going to class to learn how to be Air Force officers.

We missed the parades for the Apollo 11 crew and most of the other events that welcomed the astronauts home, but that was okay. We saw the Big Show: the landing and first moon walk. Everything else was chicken feed.

The achievements of Apollo 11 cannot be celebrated enough. The moon landing was the culmination of years of work in basic science and applied engineering. The astronauts trained for years to pilot the spacecraft to the moon and back.

Quantum leaps forward in technology made it all happen. To land on the moon, MIT engineers created the first integrated-circuit computers. One was carried on the Eagle and one in the command module. These computers had “software” that helped guide the astronauts to a safe landing.

So many other technological advances came out of the Apollo program. A lot of us rely on training shoes that evolved from the moon boots the astronauts wore. The space suits, made of material that was lightweight and almost as strong as steel, was used in everything from the roofs of sports stadiums to suits for firefighters. An electrical defibrillator — tiny enough to fit inside a space suit — was invented. It led to the pacemakers and defibrillators that keep many heart patients alive.

And that was only the beginning. Rocket scientists — the people who made Apollo 11 and the subsequent Apollo missions possible — learned enough to propel them, and their successors, to bring the world to the point where commercial launches of satellites are now commonplace and to where we can go back to the moon and beyond.

Neil Armstrong, Buzz Aldrin, and Michael Collins showed us the way, but we seem to have forgotten. We haven’t been to the moon since 1972.

All it will take is money — no bucks, no Buck Rogers — and the application of the kind of engineering and scientific enthusiasm we had in 1969. To steal a familiar line, it’s long past time to restart our race to boldly go where no man has gone before.