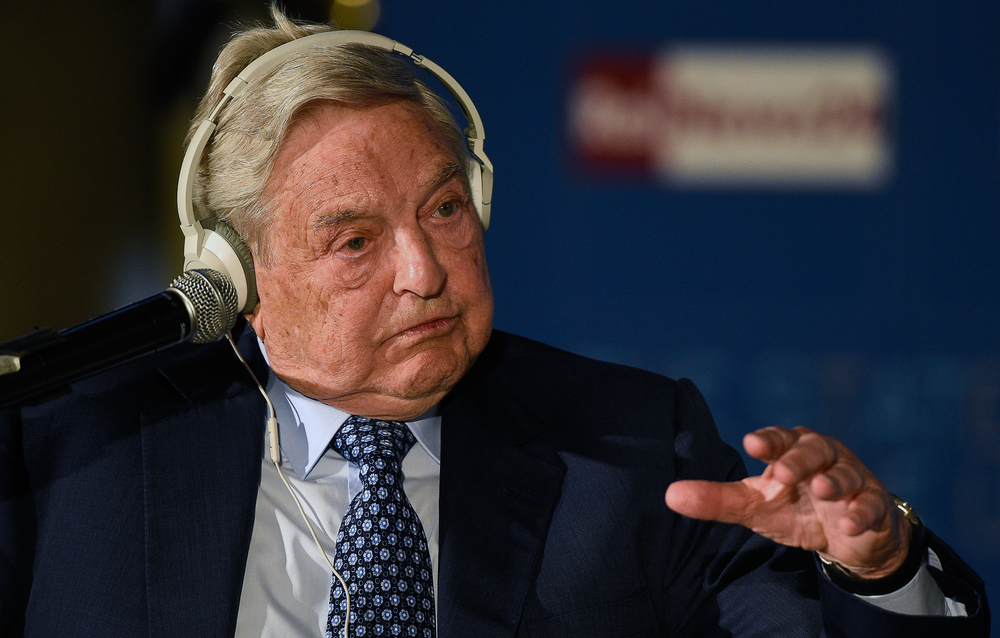 It’s by now an established trope in books and films, but the first thing the communist revolutionaries do when toppling a regime in Latin America and elsewhere is to ride to the radio station and commandeer it por la revolución.

Though what’s happening this week doesn’t quite fit the trope. Because the communist revolutionaries in the rapidly declining banana republic that is Joe Biden’s America are the regime. So seizing the radio stations isn’t exactly the triumphant signal you’d think.

What are we talking about here? Maybe you haven’t heard about the Left’s new plan to swing Hispanic Americans back to a style of governance many of them came here expressly to get away from:

A group partially bankrolled by liberal billionaire George Soros is set to purchase 18 Hispanic radio stations across 10 different markets but conservatives are fighting back, calling it a move that “reeks of desperation” to control Latino voters who have been ditching the Democratic Party.

Steve Cortes, who was a member of former-President Trump campaign’s Hispanic Advisory Council, believes Soros’ latest move is a clear sign liberals “rightly fret about the incredible gains among Hispanics for the America First movement” that has caused many of them to ditch the Democratic Party

The formation of the Latino Media Network, a new network set to be made up of the 18 Hispanic radio stations, was announced last week, and was partially financed by Lakestar Finance, an investment group affiliated with Soros Fund Management. The deal is pending regulatory approval but is expected to close later this year, giving new management plenty of time to make changes ahead of the 2024 election.

Jess Morales Rocketto, a former Hillary for America and AFL-CIO employee, and Stephanie Valencia, a former White House staffer during the Obama administration, are heading the venture, and say their purchase across the multitude of media markets will give them “access to one-third of the Hispanic population” within the U.S, according to an interview conducted by Axios.

The most iconic of the 18 stations this new leftist radio network aimed at Latinos like so many Kalashnikovs will contain is Radio Mambí, which has been a Miami institution for decades. Radio Mambí is known as one of the prime beacons of American freedom in the Caribbean region, broadcasting anti-communist messages and serving as a magnet for Cuban refugees to flee that island’s totalitarian despotic regime.

And the Cuban community in Miami is beyond furious at the idea that a bunch of Soros stooge leftists will change its format or perspective:

Promising boycotts, protests and strikes, Cuban exile leaders expressed their fear that two Miami stations, Radio Mambí and WQBA — which have traditionally advocated for Cuba’s freedom — would be silenced after being bought by Latino Media Network, a media company run by “ social activists with a left-wing progressive political agenda.”

TelevisaUnivision Inc. reached an agreement to sell 18 stations, including Radio Mambí and WQBA, in different cities, to Latino Media Network (LMN), founded by Stephanie Valencia, who worked in the White House as a special assistant to the president and as director of public engagement under the Barack Obama administration, and Jess Morales Rocketto, who worked in the Obama and Hillary Clinton campaigns.

The newly created LMN, which has managed to raise $80 million for its startup, also has funds from the investment firm Lakestar Finance LLC, associated with liberal-leaning billionaire George Soros.

The Assembly of the Cuban Resistance, on behalf of 35 exile organizations, called a meeting on Wednesday at the Bay of Pigs Museum and headquarters of Brigade 2506, in Little Havana, to express its concern about the “silencing and the marginalization of radio stations that have historically been the voices of support for Cuba’s freedom,” according to a letter delivered to the media.

Media Research Center Latino director Jorge Bonilla said it was a “panic move” for the Soros commies to buy the station, but nevertheless lamented the sale.

“Mambí has long been a thorn on the side of an entitled left that demands absolute control over what media Hispanics consume,” he wrote. “With this move, the left doesn’t just establish a beachhead — it also seizes the opposition’s crown jewel. Given the outbursts of glee among Hispanic progressives on social media when the deal was announced, it is hard to imagine Mambí not getting shut down or ‘restructured’ once the deal closes.”

It’s infuriating, because there isn’t much of a business justification for establishing the Latino Media Network. Broadcast radio, especially in a segmented market like Spanish-language radio in the United States, isn’t in a particular growth mode. Podcasts, satellite radio, and other things have sliced into that market — which is why those stations are available in the first place.

For Soros to back the leftist operatives putting this network together is not about earning a profit. They know they’re going to run in the red. They don’t care. This is about one thing, and one thing only.

It’s about putting a stop to this:

Remember that? It was a big deal a year ago, when Cuban artists and others began rising up against the dying remnants of the Castro regime in one of the more courageous political phenomena of recent times. For a brief moment it looked like Cuba might actually become a free nation again.

But only for a brief moment. Because the Left in this country, far from supporting the protesters in Cuba who agitated for human rights and democracy, instead ignored them to spout an opposite narrative. Black Lives Matter blamed the American government’s embargo against Cuba — while the protesters were waving American flags! — and the Biden cabal furthered the notion that the Cubans were in the streets because of COVID vaccine shortages.

And nobody did a thing to help the people when the Castroite thugs throttled those protesters and returned Cuba to its bleak, beaten-down existence. When it was obvious that the uprising — or maybe you could call it an insurrection — was going to fail, only then was Biden trotted out to give halfhearted support to the Cubans fighting for their freedom.

The rest of America might have forgotten about this, but American Hispanics didn’t.

Or maybe it’s a coincidence that the movement of Latino voters away from the Left and the Democrat Party, which had already begun, has been accelerating ever since the disgrace of yet another Democrat-run administration abandoning the Cuban people to the tender mercies of the animals running the show in Havana.

Nobody in the Soros gang, and nobody in Team Biden, bothered to consider the signal that abandonment sent to Hispanic Americans. Which isn’t surprising, as from the rancid beginning of this administration, Democrats have consistently told themselves they’ve had messaging problems as their policy failures mounted and their results worsened.

Consign the Cubans to misery and slavery by not helping them overthrow their tyrannical government, and other Hispanics notice and reject you, and your reaction is that you just didn’t sell it right. Sure, that works.

Just like they’re not “messaging” the disaster at the border, which is making life worse for the mostly Hispanic folks in south Texas — and turning them into Republicans as a result. And they’re not “messaging” their stupid economic policies, which is why a Republican businessman running as an independent has a real shot to knock out their candidate for mayor in Los Angeles.

So the answer to this electoral hemorrhage to come is to buy up a bunch of radio stations, including Radio Mambí, and try to silence conservative Latino voices and replace them with leftist drivel they can hear from state radio out of Havana or Managua or Caracas?

At RVIVR.com, a brand-new revivalist conservative site (it went live yesterday), my colleague Andy Hogue expressed doubts this Soros play will accomplish what it’s setting out to do:

Soros may be concerned about the long haul, as Hispanic voters are slowly favoring the GOP. Though political priorities still differ, it has long been known that Hispanics are largely pro-life, pro-family, overwhelmingly Christian, and concerned with affordability. And they turned out for Trump in ways that caused the political establishment to develop PTSD. Awakening this demographic been a dream of Republican operatives for as long as Democrats have hoped to give Rush a run for his money.

But now it’s happening. Enough that the first conservative Hispanic network has already launched. While it hasn’t purchased any radio transmitters, Americano is taking to streaming and satellite and is by no means peddling socialism.

According to that bastion of accurate and objective information, NBC News, Americano’s founder and CEO, Ivan Garcia-Hidalgo, balked at fear-mongering distributed by the Left that Americano will be a “disinformation outlet.” We’ll let him have the final word.

“They’re scared. And they should be,” Garcia-Hidalgo said, per NBC News. “Democrats took Hispanics for granted for too long, and no one thought to create a home for us in conservative media. There is an appetite for this. You see it on social media. You see it in elections.”

It’s too late to recapture the Hispanic vote. The Left doesn’t have a “messaging” problem, and canceling Radio Mambí and others won’t put los caballos back in the barn. Latino voters aren’t serfs, and they don’t live on some Democrat plantation.

And they sure as hell don’t want what the Biden regime and the Soros mob are selling. The movement to the GOP will not be stopped by some hostile radio takeover out of the movies.