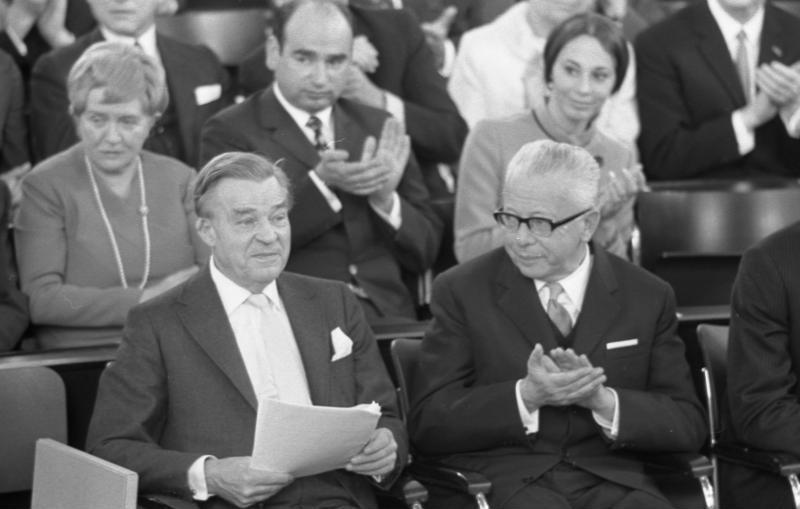 More Politics
Sign up to receive our latest updates!
Register
Hot Off
The Press
Drawn to Humor
Sam Bankman-Fried and Other Turkeys
by Yogi Love
Laughing Matters
The Entire Postmodern Left Is Chinese
by Itxu Díaz
Political Hay
Midterm Results Show What Happens When Americans Vote With Their Feet
by Michael Bedar
Hither and Yon
Brutality Beckons in Beijing, Poltroonery Prevails in Washington
by Scott McKay
Flynn Files
Apple and China Want to Delete Apps on Your Phone
by Daniel J. Flynn

Gunnar Myrdal vs. Friedrich Hayek. There stood a pair of leading heavyweights — a Swede and an Austrian — who were nothing alike. They went into the ring with radically different ideas and theories about the “dismal science” (not to be confused with the “sweet science” of boxing). Which one was the real savant when it came to thinking about how best to maximize scarce resources … or how to create the conditions that would enable the greatest number of people to lead full, purposeful, and satisfying lives? If one of them deserved to be considered among the all-time greats in economics, was it Myrdal or Hayek?

Here’s a most important point. Hayek did not believe that good ideas would automatically triumph over bad ideas.

In failing to address that question, the Royal Swedish Academy of Science, first established in 1895 by Alfred Nobel (the inventor of dynamite), was resolute only in its desire to remain irresolute. It declared a tie — raising the hands of both men in victory as joint recipients of the Nobel Prize for economics in 1974.

That didn’t go down very well with anyone — not least the honorees themselves. Myrdal, an avowed socialist, believed that central planning under the guidance of an elite cadre of experts was the fastest and surest way to achieve both economic growth and social justice or progress. He wasn’t at all happy about sharing the prize with Hayek, whom he regarded as a “reactionary” and an “apologist for capitalism.”

Of course, Hayek was no apologist for free-market capitalism. He was, rather, one of its greatest champions, as well as being a devastating critic of the follies of communism, socialism, and central planning in all of their different guises.

Speaking at the prize banquet in 1974, Hayek applauded the selection committee on its audacity in awarding the prize to “one whose views are as unfashionable as mine are.” However, he also said, “If I had been consulted on whether to establish a Nobel Prize in economics [something that had happened only five years earlier], I should have decidedly advised against it.” He quoted another scholar who said: “Students of social science must fear popular approval: Evil is with them when all men speak well of them.”

No need for us to follow the waffling example set by the academy so many years ago. I [Sinquefield] will now act as the referee of a much-needed and long-delayed rematch, played out in my own mind like a chess game — with the advantage of 20-20 hindsight about how their divergent views have played out on the world stage over the last half century. To me, it’s an easy call, beginning with the fact that Hayek is still standing tall [long after his death in 1992, he remains a towering figure in economics], while Myrdal has faded into obscurity — dropped for the long count. Treating my decision as if it were today’s headline news, here’s how I call the fight: HAYEK WINS REMATCH!!! MYRDAL OUT COLD.

The Wisdom of Markets and the Folly of Central Planning

Before leaving Myrdal behind, it’s worth citing the concluding passage from the Swede’s 1974 address to the Swedish academy. It shows how much he exulted in the idea of “scientific socialism” under the guidance of all-seeing experts:

We are free to expand and perfect our knowledge of the world, only restricted by the number of scientists working and, of course, by the degree of their diligence, brightness and their openness to fresh approaches.

Are we really supposed to expect to find a “perfect [or near-perfect] knowledge of the world” in the mind of any individual or group of experts charged with finding ways to substitute their judgment for that of a free and unregulated market?

In his famous 1945 essay “The Use of Knowledge,” Hayek answered that question with a resounding NO. He pointed out that knowledge is so widely dispersed within the marketplace that no one, including government planners, has more than a tiny fragment of that knowledge. Market exchange and prices generate critically needed information and motivation. Together they act as “a daily referendum of what is be produced and who is to produce it,” not just locally, important as that is, but all around the world. Whenever a government plan restricts voluntary exchange, it substitutes its own ignorance for the greater wisdom of the marketplace. And it does so to the detriment of its own people.

Perhaps no one captured the folly of central planning any better than Vladimir Lenin, the world’s first communist dictator. He was also the first out of many communist dictators to learn that none of their wonderful economic plans ever worked. Not long after taking power in 1917 he created a famine by ordering peasants to turn over their harvest to the state — at a price so low that they could not cover their production costs. So, Lenin relented a bit — endorsing a New Economic Plan that, temporarily at least, allowed the peasants to bypass the state and sell some of their produce on the open market.

The change in plans caused Lenin to gripe to an associate that “he felt as if he were trying to steer a bicycle whose wheels were not connected to the handlebar.” And why was that? As Hayek pointed out so convincingly, without an open and competitive marketplace with constantly changing prices, there was nothing to connect supply and demand, nor anything to motivate anyone to work hard and be creative. But then, of course, that would not be communism.

I [Sinquefield] can personally attest to the fact (and I do regard it as a fact) that in capital markets, no less than other markets, even the best experts cannot beat the market in any consistent way. In fact, they are doomed to under-perform the market.

I first became aware of the theory of efficient markets, which is really an off-shoot of Hayekian thinking, when I was working for my MBA at the University of Chicago. It seemed to me that it was the only thing that made sense out of everything — creating order out of seeming chaos. Upon graduating I went to work for American National Bank of Chicago, where I became involved in setting up one of the pioneering index funds — investment management funds that only try to mimic an index of financial securities, a strategy that dispenses with the need to hire expensive “experts.” That was successful and it led, several years later, to my being one of the founders of Dimensional Fund Advisers, which became one of the significant players in an industry that now handles many trillions of dollars in investments.

I liked the way the way Hayek explained efficient markets even better than they did at the University of Chicago. He described the “marvel” of free-market capitalism with these words — “Suppose you know everything everybody does. But no one except the market knows that at any moment in time. And that’s why you can’t have an advantage over the market.”

But here’s a most important point. Hayek did not believe that good ideas would automatically triumph over bad ideas. As he put it, people in democratic countries might easily be persuaded to adopt or even demand policies that “hand out the privilege of [economic] security, now to this group and now to that … creating conditions in which the striving for security becomes stronger than the love of freedom.” In his most famous book, Hayek described how democratic societies that failed to protect their own liberty — trading freedom for false promises of bigger and bigger government entitlements — were making the tragic mistake of following The Road to Serfdom.

Voluntary exchange for mutual benefit is the key principle that makes free-market capitalism possible — and, with it, self-sustaining democracies. Not only does it enable the greatest number of people to achieve their full potential, but it is also the all-seeing but unseen eye that brings about greatest possible cooperation and collaboration between millions of people who are complete strangers to one another. As Hayek said, it is truly “a marvel.”

We would only add that it is a political as well as an economic marvel. Like Benjamin Franklin, we believe an enduring democracy can only be built on the foundation of limited government with open exchange of goods, services, and ideas. We remember Franklin’s cautionary words, “It’s a Republic — if you can keep it.”

Rex Sinquefield is president and a co-founder of the Show-Me Institute, a free-market think tank based in St. Louis, Missouri, where Andrew B. Wilson is senior writer and resident fellow.