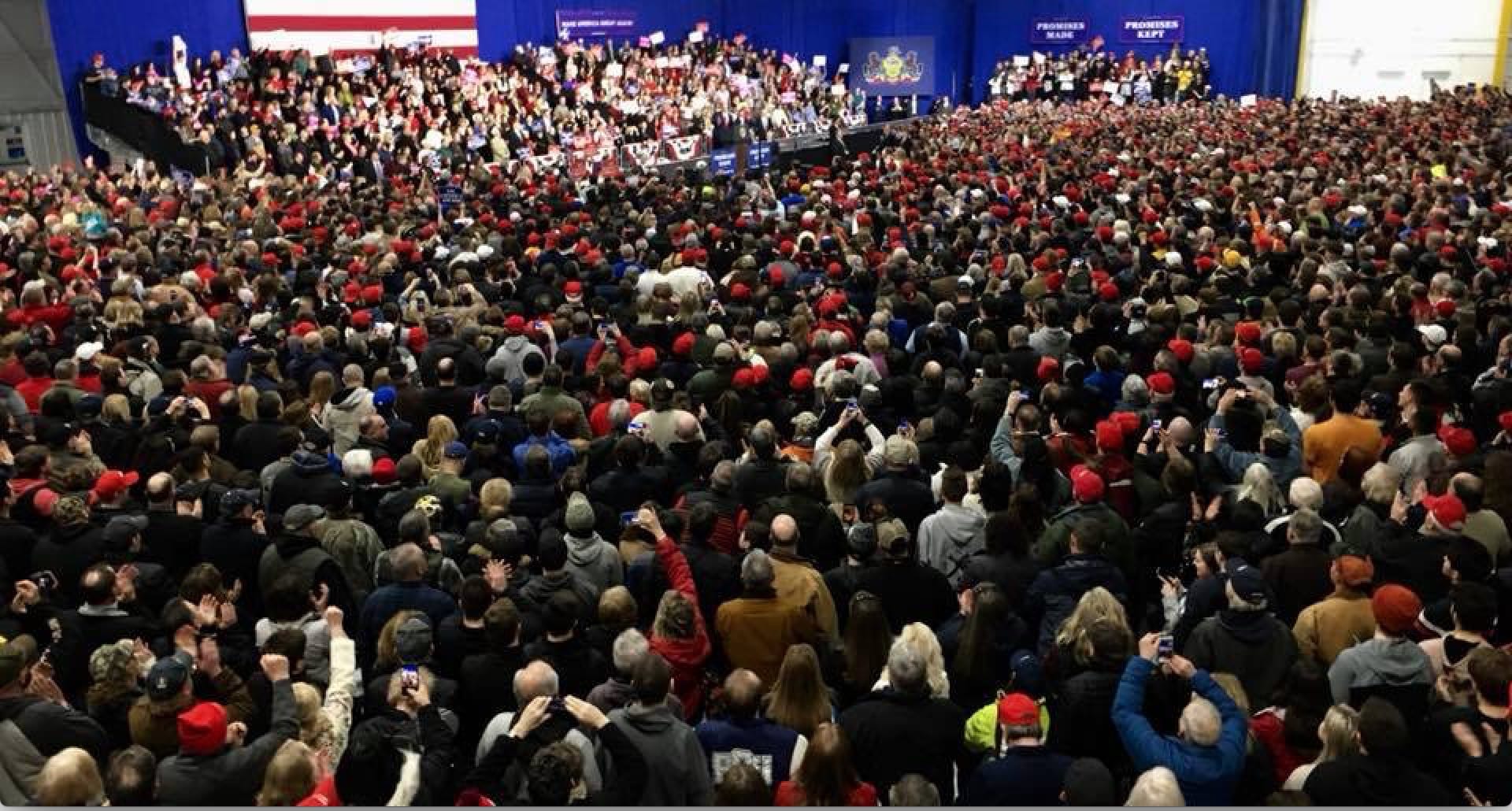 There is an essential read by Steve Sailer at Taki’s Magazine from a week ago which might well explain the cultural and political landscape better than anything else you’ve seen in recent vintage. It’s entitled “A Half Century of Amnesia,” and you should take the time to have a look.

Sailer makes several important points, which could very easily be lost to readers not courageous enough to wade through obvious, though perhaps politically incorrect, facts, in recognizing the current cultural atmosphere which has not only given us Donald Trump in the White House but an apparent brewing sea change in the culture which the academic and media-elite Left simply isn’t recognizing (Caitlan Flanagan’s surprising piece on Jordan Peterson’s growing celebrity at the Atlantic notwithstanding). Chief among those is Sailer’s central point; namely that the Left has declared war on straight American white people for decades — and there is a natural price to pay for that hostility.

That sounds like a wild accusation, and it certainly feels strange to levy it, but how can anyone disagree? This is a season, after all, in which the New York Times has gone totally off the deep end — embracing as part of its editorial staff a stunning mediocrity of a writer named Sarah Jeong whose Twitter is a fountain of anti-white racism so dependable as to put half of Yellowstone to shame, and which not so long ago ran a piece in its sports section decrying The Unbearable Whiteness of Baseball, decrying the fact that Major League rosters contain a proportion of white players which conforms to the population as a whole.

This is, in case you’re not aware, the purported newspaper of record for the United States of America — and in its pages can be found practically daily expositions of virulent bigotry toward the nation’s majority population.

According to Sailer, it’s idiocy to believe, as the Left does — and he quotes liberally from a quite educational Vox piece by Ezra Klein which outlines this belief — that ordinary white Americans will be told again and again by our betters in the Democrat Party that America, via mass immigration, is to be made a majority-minority country and that the “privilege” afforded to whites as the majority population will soon be stripped away and justifiably so, and no reaction should be expected. From Klein’s piece…

So here, then, is what we know: Even gentle, unconscious exposure to reminders that America is diversifying — and particularly to the idea that America is becoming a majority-minority nation — pushes whites toward more conservative policy opinions and more support of the Republican Party.

Understand — Klein doesn’t write this as a warning to Democrats that pushing immigration policies fundamentally altering the demographics of America will be seen as a bad idea by the majority population of the country. Klein writes it more as a curiosity, or as an indictment of the “bitter clingers” out there who can’t get with the inevitable program.

Sailer, chuckling at Klein’s arrogance, notes how ridiculous it all is. How obvious that if you make manifest your intention to replace the current majority with a new one, that the current majority might find your plan objectionable? He recalls that back after the bare-minimum Republican electoral win in 2000 he suggested the Republican Party merely needed to push its share of the white vote from 54 to 57 percent in the country in order to retake a solid majority of American voters (this idea was opposed by the GOP establishment and then-president George W. Bush’s guru Karl Rove, who believed the key to the party’s success could be found in co-opting the Hispanic vote). Fast forward 16 years, and Donald Trump fulfilled Sailer’s prophecy by winning 58 percent of the white vote, a number which might very well be a low mark for future elections, on the way to the White House. Trump didn’t win the popular vote, you might argue, but he is in fact the president.

That victory is not evidence of some Republican strategy to radicalize race in America, mind you, despite what you might see from the crowd at MSNBC or the Nation. While some of Trump’s supporters might be a bit more aggressive in pushing a defense of traditional majority (white, if you will) American culture, what activates the President’s base of support is less some sort of white identitarian message than a reaction to the opposite which surges through today’s Democrat Party. Who’s the white Republican answer to Joy Reid on cable news, after all?

And by the by, Trump’s approval rate among blacks is a lot higher than that of his recent Republican predecessors, indicating all of this is less about race than is advertised.

When DNC chairman Thomas Perez takes to the airwaves to tout the obviously intellectually-challenged Alexandria Ocasio-Cortez as his party’s “future” despite her clear lack of facility with economics or civics and her combination of Venezuelan-style socialism with an ethnic appeal to non-white voters, and particularly when Ocasio-Cortez throws out the most obnoxious statements about how white upper-middle class soccer moms are “not America anymore,” it isn’t required for a single Republican to talk about race for white voters to understand the lay of the land.

If you want someone’s vote, you have to make them understand that you don’t hate them and you’re not out to get them. Isn’t that the lecture the GOP has received ad nauseam — and perhaps rightfully so — by black and Hispanic advocates?

Well? Why wouldn’t that similarly apply to Democrats and white people?

Particularly given the narrative that America will soon transform itself from its 60-something-percent white population to majority-minority status. Talk enough about the coming Browning Of America, and that population will eventually believe it and act accordingly as they see their interests. This is mere human nature, after all. Anti-white triumphalism, as Sailer notes, is merely advertising of a threat to the collective interest of Americans of pallor and it’s bound to bring these uncomfortable subjects to the fore within that population.

And what on earth makes anyone believe that a population constantly demonized as brutal and racist and whose achievements are assailed as the products of exploitation and violence would stand aside, allowing itself to be marginalized through immigration? Should it not be fairly obvious that at some point those horrible white people in America would simply choose to put a stop to the nation’s open-borders policies which have transformed the country from immigrants being a five percent share of the population in the 1970s to a current 14 percent share? Right or wrong, should anyone be surprised to see such a shift as Trump’s presidency has made manifest?

And while we’re at it, since when was it an immutable fact that America would have an ever-growing population of immigrants? Our history is of ebb and flow where that’s concerned, and until the past 50 years the ebb and flow never fundamentally altered the racial balance of the country. Wasn’t it a bit presumptuous that current trends would continue forever without some degree of pushback?

This surely all sounds horribly racist, to certain ears. But it isn’t intended that way — it’s simply an observation about human nature. Certainly Sarah Jeong’s presence at the Times editorial board will make that paper less popular among those readers whose ethnicities she has attacked, and those readers will surely show how unimpressed they are with the epithets thrown their way by their consumer decisions. How is one to believe electoral results will differ when the Left proceeds to double down on Jeong’s racism? That’s precisely what happened when National Review’s David French addressed the Jeong matter — sanely — and was met with a semi-literate anti-white screed from Medium’s Ezinne Ukoha denying the entire existence of anti-white racism. Does anyone believe this kind of argumentation will be persuasive?

You can’t insult a group of people repeatedly, aggressively, the way the Left in its mob mentality insists upon doing to the majority of America and not expect consequences. Those will come. And in its rampant enthusiasm the Left has apparently decided to take a swing at some 60-plus percent of the population — a decent chunk of which has heretofore been sympathetic to its policies.

That won’t continue when idiocy like intersectionality — white people are allowed to have an opinion only after people of other races have had their say, and only after going through a progression prioritizing the disabled over the abled, homosexual before straight, and transgendered before, er, gendered — or Critical Race Theory “black people can’t be racist” claptrap like that espoused by Ukoha is the order of the day on the Left. When it’s not acceptable to express concern about jihadist training camps teaching malnourished and abused kids to be school shooters because to do so implies bigotry against Muslims, while at the same time the NYT smart set castigates Mike Pence for his flyover-country Christianity and dubs him a threat to the peace therefrom, how could it be a surprise when ordinary white people, many of whom might well have voted for Barack Obama in what they thought was a show of good faith to the rest of America, simply don’t care anymore?

We’re not so far from Labor Day, which is the traditional mark on the calendar when voters begin to pay attention to coming elections. You’ve no doubt heard plenty about a supposed Blue Wave in this fall’s midterms, and Democrats are counting lots of chickens which have not yet hatched. But don’t be surprised when you see that Blue Wave dissipate as Election Day nears across America — and particularly in districts where the white vote is dispositive.

As Andrew Breitbart said, politics is downstream from culture. But both culturally and politically, the Left in America has been on a determined attack against traditional white America. Millions of Americans — people of pallor, if you will — who hate even being defined by the color of their skin will nonetheless take up identity politics if they feel they’re pushed to do so because someone is calling them racists simply because of their ethnicity, and demanding they forfeit their economic and/or social status — status they may not even be satisfied with as is — accordingly. They will inevitably respond to this, and negatively.

And if they do, the Democrats will have only themselves to blame for the results.

Scott McKay
Follow Their Stories:
View More
Scott McKay is publisher of the Hayride, which offers news and commentary on Louisiana and national politics. He’s also a writer of fiction — check out his three Tales of Ardenia novels Animus, Perdition and Retribution at Amazon. Scott's other project is The Speakeasy, a free-speech social and news app with benefits - check it out here.
Most Popular
1
Special Report
Evidence Mounts — Chauvin Did Not Murder Floyd
by Jack Cashill