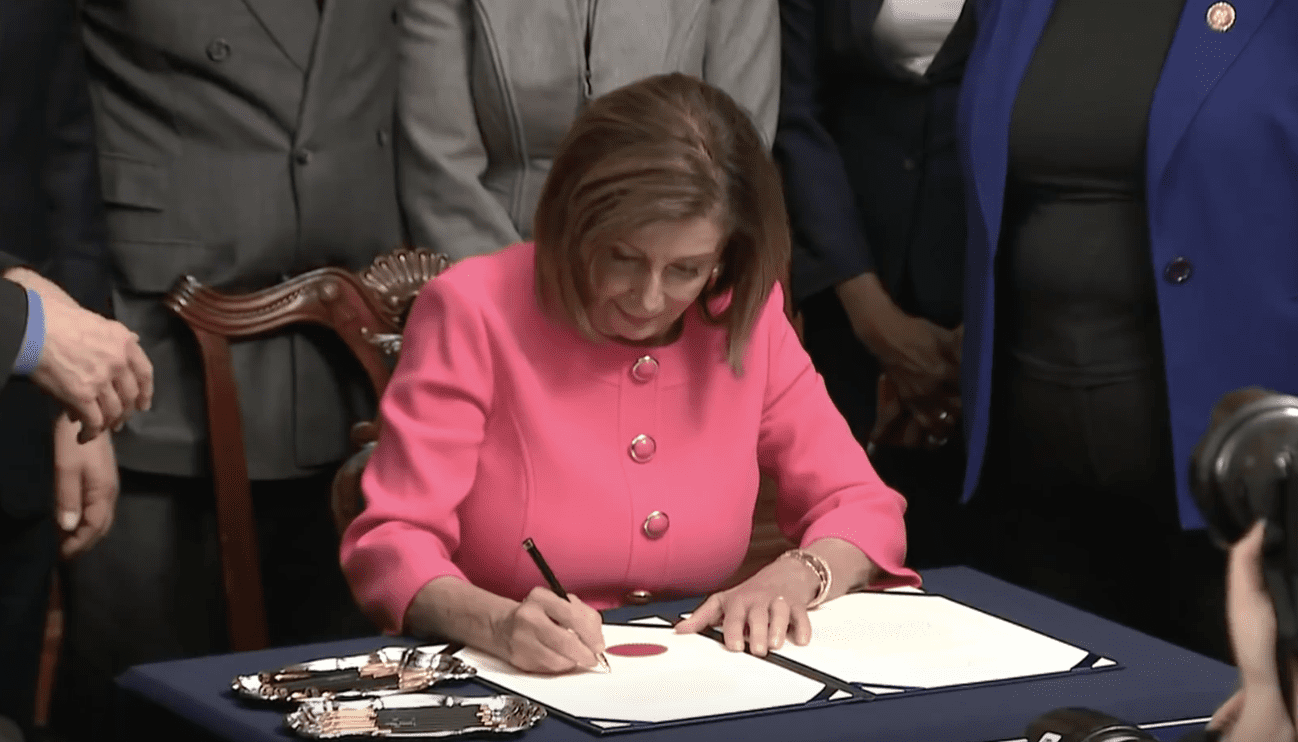 This is not a constitutional crisis. But it plays one on TV.

“Do me a favor?,” Nancy Pelosi paraphrased the president’s call to the Ukrainian leader. She then, paraphrasing The Irishman, translated the first question as, “Do you paint houses, too?” But briefly withholding foreign aid that ultimately reached its destination — and never actually sparked an investigation of the Bidens at Ukraine’s end — does not equate to murder for hire. And since Pelosi could loosely paraphrase Trump’s words, to a Schiffian degree, on Wednesday only because the president long ago released the call’s transcript, we know he does not do his own carpentry, right?

Speaking of quid pro quos, Nancy Pelosi, with trays containing 32 pens within reach, used many, many writing instruments to sign her name to the impeachment bill. Each stylus now acts as a trinket, like the junk one might purchase at a Broadway gift shop (except much more expensive) to memorialize seeing Hello, Dolly! or Jersey Boys. Pelosi gave the pens (at least Princess Leia waited for the Death Star’s destruction before bestowing those medals) to fellow Democrats, who surely give them to donors who gave to Democrats, a pen-laundering of sorts necessitated by Pelosi wishing not to appear even more uncouth by directly give the ball-point souvenirs to the party’s funding fathers.

The oddball procession of the shiny-eyed Jerry Nadler, Zoe Lofgren, Adam Schiff, Jason Crow, Hakeem Jeffries, Sylvia Garcia, and Val Demings imitating somber, sober, stoic pallbearers marching two-by-two minus the coffin to deliver the document Pelosi signed to the Senate underscored the farcical nature of the supposedly so-serious event. If Don Knotts, Larry Fine, Almira Gulch, Steven Urkel, Kuato, the Fabulous Moolah, and Charles Nelson Reilly marched to the Senate in their stead, then the public might have viewed the spectacle with more solemnity.

Chief Justice William Rehnquist signaled his grasp of the theatrical nature of impeachment better than most when he donned Gilbert & Sullivan butter stripes on the sleeves of his robe during President Bill Clinton’s trial. His successor, John Roberts, arriving at the Senate wearing a smirk on his face but not the yellow swaths, also seemed transparently self-aware, if less willing to broadcast it in such an ostentatious manner, of his role as a prop in a matter of stage and not state.

When Roberts administered the oath for senators to “do impartial justice,” 100 men and women lied to him. To emphasize this contempt for honesty and the Constitution, and to preserve it for posterity in the National Archives, the senators who all arrived at conclusions before the impeachment hearings even started signed a book seconding their spoken lies with written ones.

After House hearings that relied almost exclusively on hearsay, prevented the president from confronting his accuser and calling the witnesses that he wished to call, and ultimately devised two articles that rise to neither high crimes nor even misdemeanors in the criminal code, the impeachment managers demand that the Senate hear from a new set of witnesses (just not Hunter or Joe Biden or Eric Ciaramella) and consider evidence not introduced during the House hearings. This attempt at shifting the narrative, prompted by a public unmoved by the House hearings, mirrors the shifting justifications — Rep. Al Green cited “racist” comments,” Rep. Steve Cohen pointed to emoluments, others named the Russian collusion hoax, and still others invoked myriad rationalizations — to impeach a president that many Democrats wished to remove before he even took office.

The Senate trial features the theatrics, histrionics even, of stage and screen. It just lacks the suspense. When the theatergoer knows the outcome before the first act, the play cannot help but bore. At least the audience gets a happy ending here. And that, of course, works as a recipe for a sequel or two — or 10. The bad guys, from Jason to the Joker, always look to exact their revenge. But in shows as in show trials, the public appetite wanes over time.