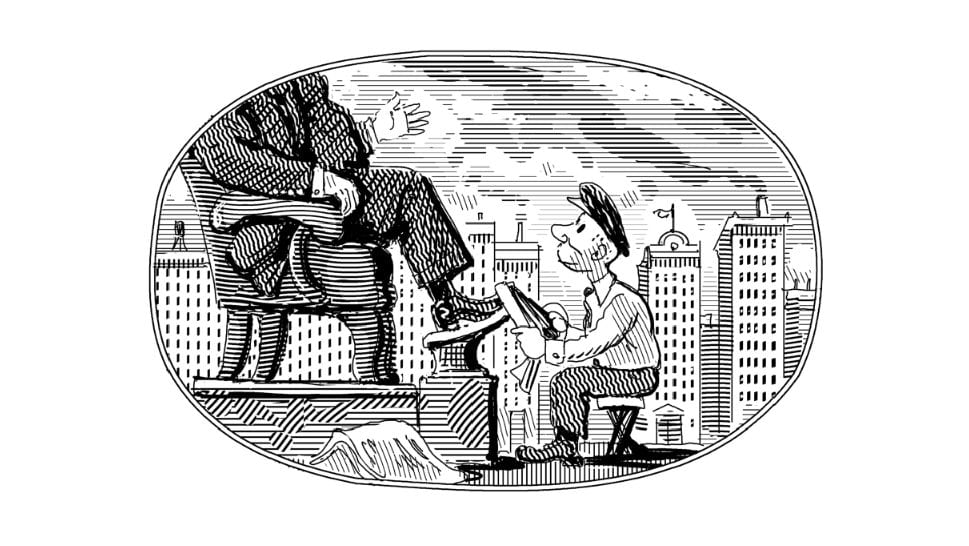 Dr. George Washington Plunkitt, our prize-winning political analyst, has recently retired from a staff position with the House Ethics Committee and is working on his memoirs. But he has graciously consented to once again advise American statesmen in these times of trouble. Address all correspondence to plunkitt@spectator.org.

A foreign leader is blithely discarding international norms, and the United States must send a message that this is not acceptable. Yes, I’m talking about Gurbanguly Berdimuhamedow, the president of Turkmenistan. A few weeks ago, at a summit on climate change, we were heading for the same UN towncar, and Mr. Berdimuhamedow got into the front seat—even though I had already called “shotgun.”  We cannot stand idly by and allow strongmen on the world stage to trample the international rules of dibs!

Later, when Vladimir Putin was telling that same old joke about the drunk Japanese tourist visiting a Siberian brothel, the one everyone has heard 100 times before, Mr. Berdimuhamedow and I blurted out the punchline at the exact same time. But when I called out jinx, which every schoolboy knows obligates him to immediately buy me a Coke, he calmly responded that he would not contribute a cent toward syrupy American imperialism.

These are truly lawless times.

Have you made it clear to Mr. Berdimuhamedow that if he does not heed such universally recognized rules, you will not be inviting him to your birthday party? And that there will be ponies, and a miniature Ferris wheel, and a man juggling on stilts? And that all of the other important stans—Kyrgyzstan, Tajikistan, Bazookastan, Franceistan, Stanley Steemer—are going to be there?

Failing that, you could always talk to the principal, or even report Big Bad Mr. B to Michelle Obama’s Anti-Bullying Prevention Task Force. The toll-free number, last I checked, was 1-888-WIMP-OUT.
—GWP

This filibuster thing has really taken off. First Rand Paul spouts off about drones, then Wendy Davis becomes a hero down in Texas, and now Ted Cruz basks in the limelight like a sleepy giant lizard, if giant lizards hated health insurance and wanted to keep other poorer lizards down. Anyway, the point is that I need to get in on the action. Filibustering seems to be a one-way ticket to influence—and an interview on Meet the Press by that nice man with brown eyebrows and white hair and two first names, in that NBC studio where they have those mints that I love so much in the green room.

Problem is, I don’t have any ideas for a good filibuster topic. What will capture the zeit of the geist?

P.S. That stands for “postscript.” Learned that the other day!

Mr. Vice President/President of the Senate—

I’m not even sure that you can filibuster as the presiding officer in the chamber. Robert’s Rules of Disorder, the sequel to his earlier New York Morning Telegraph bestseller, offers no guidance. I suppose you could attempt it. Simply begin reading a cookbook, and see if the sergeant-at-arms tries to arrest you. (Though if the sergeant can only act on order of the Senate, how will the chamber make its will known over your booming recitation of your mother’s recipe for meat pie?)

That said, take stock of what you want to accomplish. It’s too soon to call the Paul and Cruz filibusters unmitigated successes. And the most memorable part of Davis’s pro-abortion antics was arguably her pink sneakers. (I hear there’s an endorsement deal in the works: “Wendy Davises: The perfect shoes for your trip to Planned Parenthood.”)
—GWP

I didn’t want to shut down the government, but once it came, it needed to be painful. So we shuttered national parks and federal websites. I asked the National Weather Service to throw its forecasts 10 degrees in either direction and directed workers to take down half the stop signs on Capitol Hill. People need to feel how vital we are! I just don’t know how we could have avoided this. Republicans didn’t want to negotiate, even after I mailed John Boehner a dead fish, just like Rahmbo Emanuel taught me.

You’re right: without the U.S. Botanic Garden, who would garden the botanics? Without the Office of Insular Affairs, who would manage the insuls? Without the Women Veterans Service, who would service our women veterans? But if you want someone’s respect, you don’t mail him a dead fish. You mail him a dead koala bear. After all, a man sadistic enough to violate the Endangered Species Act is capable of anything.
—GWP

Can you help me to understand Wikipedia? My staff printed me a copy of it, and the information about me is full of grievous errors. For instance, it says that my greatest accomplishment was inventing a new kind of spatula. And it claims that my given name means “victory” in a secret Mormon language.

Who wrote this stuff? How do we get rid of it? Funk & Wagnalls got something wrong about me in its 1976 encyclopedia, but we just rang them and they fixed it.

Welcome to the Internet.
—GWP