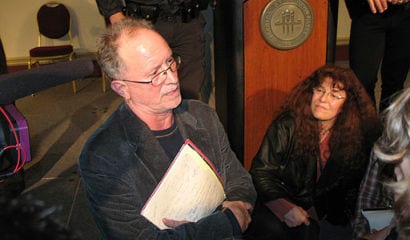 WASHINGTON — When asked on left-leaning MSNBC why President Barack Obama refrained from describing the Boston bombings as a “terrorist attack” David Axelrod, Mr. Obama’s longtime political adviser, readily saw a political opportunity. The blood had not yet been washed away from the streets. We had yet to count up the casualties. Yet Axelrod saw a political opening, an opportunity to advance one or another of his pet political issues. So he said, “I’m sure what was going though the president’s mind is — we really don’t know who did this — it was tax day.” Yes, tax day!

This is not the response of a normal mind. A normal mind would not, given the promiscuity of public bombings in the Middle East and now another bombing here in America, think it was provoked by “tax day.” Conceivably the bombs in Boston were the work of small-government libertarians or of Tea Partiers. They could even be the work of vegetarians, but that was not the question. Axelrod was asked why the President was not describing the bombings as a terrorist attack. It certainly looked more like the work of terrorists — either left-wing lunatics or right-wing lunatics — than tax protesters.

The politicking continued. On CNN Barney Frank, the former Massachusetts congressman, when asked about the bombing, averred: “I never was as a member of Congress one of the cheerleaders for less government, lower taxes. No tax cut would have helped us deal with this or will help us recover.” So Barney’s response to the bombs in Boston is to favor a tax increase, and while he is at it why not throw in gay marriage?

We have a word for the kind of mind that keeps advancing pet political goals even when tragedy is in the air. It is “fanatic.” Truth be known, an awful lot of politicians on the left are fanatics. Sure we have fanatics on the right, but they are usually widely recognized. The fanatics on the left are more numerous and are frequently palmed off as presidential advisers, viz. Axelrod, or elder statesmen, viz. Frank.

Whoever committed the cowardly and despicable carnage in Boston was in fact a terrorist. The bombing itself was an act of terror. In its very savagery — apparently designed to amputate limbs as well as to kill — it causes me to pause in my opposition to capital punishment. Caught in the horror of the moment, Americans perhaps despair that such acts have hit a new low. Yet I am afraid this is not the case. What happened in Boston Monday has been going on for years, actually for centuries.

There was terrible violence in the draft riots of the Civil War. There was more at the end of the 19th century with the labor unrest of the Wobblies and other radical union organizers. The Pullman strike comes to mind and the Haymarket Riot in Chicago. I happen to have a connection to the Haymarket Riot, my great grandfather Frank Tyrrell being for many years the sole survivor of the Chicago police force that opposed the labor radicals when some fiend set off a bomb in the crowd. As a small boy I was photographed by one of the Chicago newspapers putting a wreath on the police memorial. The Haymarket memorial was itself bombed twice during a more recent outburst of bombing violence, that being by the student radicals of the SDS at large in the 1960s and 1970s. They were enraptured by some nebulous vision of Utopia and resorted to bombs, killings, all manner of criminality, and, yes, gun violence to further their cause. By the way, who was prominent among the SDS bombers of the Haymarket memorial? Why, Bill Ayers the president’s Chicago friend, and it is widely rumored the ghostwriter of his best-selling autobiography.

Bill, of course, went on to have a distinguished career as a professor of education in some of the most forward-looking projects in our nation and became a respected public figure in Chicago, though he did in 1973 dedicate a book to — among others — Sirhan B. Sirhan, the 1968 assassin of Robert F. Kennedy. Some have called it America’s first terrorist act. Now we have another.

Doubtless Bill today favors gun control, and all manner of reform on Our President’s agenda. Making sense out of modern America is at times a real challenge, especially when we are dealing with the left. At least we have already prohibited the private sale of explosives for personal protection and sport. Though I will bet you Bill Ayers could tell you how to lay hands on some.