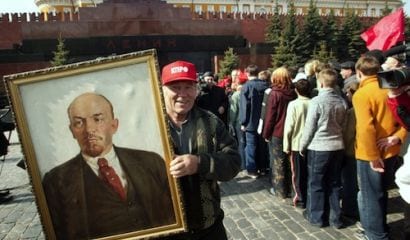 Question: What do Earth Day and Vladimir Lenin’s birthday have in common? Answer: they both reoccur every year on April 22. Coincidence?

Here’s another: When the communist movement imploded in the late 1980s, many of its disciples just happened to join… yep, you guessed it: the environmental movement.

Let’s back up and start from the beginning.

Vladimir Lenin, a hateful man, was born April 22, 1870, precisely 100 years before the first Earth Day. The number “100” is auspicious for the communist movement. It reflects the number of human beings exterminated by the Marxist-Leninist ideology over the last 100 years. According to the seminal Harvard University Press work, The Black Book of Communism, communist governments killed over 100 million in the last century. This, incidentally, is a conservative figure. The total number of dead is probably closer to 140 million—more than double the combined deaths of World War I and II.

Our more knowledgeable friends on the left will cry foul at my crass connection between Lenin Day and Earth Day. They might note that Lenin was not an environmentalist. True, Lenin was a collectivist. He was also an angry atheist who detested human beings, mowing them down, filling land-fills with them. He did, however, share the penchant for central planning championed by environmentalists. And like environmentalists, more people were a problem for Lenin and his minions. Both environmentalists and Leninists view people as a drain on resources. For environmentalists, too many people consume too much of the earth’s (alleged) limited resources. For Leninists, too many people consume too much of the state’s limited resources. Both see mass collectivism and redistributionism — not to mention government control and seizure of property — as solutions to perceived global problems.

But to my main point: Was it a coincidence that the first Earth Day occurred on Lenin’s 100th birthday?

To be sure, conventional history tells us that the initial Earth Day had unsuspicious roots. One of its founders was Wisconsin Senator Gaylord Nelson, a Democrat and an environmentalist. He is typically credited as the initiator of Earth Day. By the time of the first Earth Day, Country Club Republicans like New York Governor Nelson Rockefeller celebrated by launching environmental departments in their states — i.e., cumbersome regulatory agencies that communists would come to admire.

But was there more to it? Was the communist movement involved?

For the record, this was a question that didn’t escape notice in 1970, from the eye of the FBI to Time magazine and the New York Times. The two obvious parallel dates raised eyebrows. The Time piece covering that first Earth Day, published in the May 4, 1970 edition, shows how our mainstream press was once more level-headed. Time wrote of the event: “It had aspects of a secular, almost pagan holiday — a sense of propitiating an earth increasingly incapable of forgiving what man has inflicted upon it.”

Can you imagine that kind of lead in Time today? Unfortunately, the ’60s radicals who populated the first Earth Day now run such publications.

Time noted that 100,000 marched in New York alone for the first Earth Day. Notably, New York was where the communist presence was strongest. Both Communist Party USA and the Daily Worker were headquartered in New York, not to mention numerous communist front-groups. The Vietnam War was in full swing, and so were the war protesters, many of them peace-loving liberals who were easily duped by pro-Vietcong communist ringleaders like Mark Rudd, Tom Hayden, Bill Ayers, and Bernadine Dohrn (to name just a few) — who today are professors and literal Progressives for Obama (seriously, look it up).

Communists specialized in agitation and propaganda. They had a campaign for everything. They excelled at suckering impressionable liberal/progressive dupes, especially youth, whom they targeted at World Youth Festivals and via other deceptive activities. At this point, April 1970, they were having wild success with college students. Many of the major anti-war protests had communist fingerprints all over them. The documents have been declassified. (In my book Dupes, I have several chapters on this.) Congress knew about the communist involvement and held extensive hearings.

New York’s huge communist community had an amazing ability to turn out a crowd, whether to denounce Eisenhower as a fascist for condemning the sweet and innocent Rosenbergs or to generate a ticker-tape parade for Fidel Castro. It was at such blatant phoniness that the communists really shined.

And so, the question remains: Did the closet Reds come out into the warm sunlight on April 22, 1970, organizing America’s first Earth Day on Lenin Day?

And aside from American communists, what about Moscow’s hand? Did the Soviets play a role, or care about the environment?

The Soviets, of course, didn’t give a damn about the environment. The only recycling they ever did was Lenin’s body, which needs constantly to be re-embalmed. In fact, Lenin is a metaphor for recycling: it’s costly, challenging, and doesn’t work very well.

Indeed, if you want to see real pollution, the communist world had it by the river-load. It was horrid — toxic. If you want to clean up your environment, you need capitalism, because wealthy countries (which are free-market based) can afford it. When you’re communist and dirt poor, your concern is bread or rice, not “paper or plastic.”

And yet, the environmental movement ultimately became a haven for old communists from the former Soviet Union. One of them, Mikhail Gorbachev, proudly proclaimed himself a “Leninist” (see his 1987 bestselling book, Perestroika) long before he proudly proclaimed himself an environmentalist. When Lenin’s empire alas crumbled at Gorbachev’s feet, the former general secretary went green. Once out of the Kremlin, Gorbachev formed an environmental organization with quasi-religious overtones. It was called the Green Cross, a re-constituting of the Red Cross label. It’s a fitting metaphor for the green-olatry of the movement. The red cross of Christ becomes a green cross of Gaia. You can see this in Gorbachev’s 2000 book, On My Country and the World, where he calls for “a new… environmentalization of consciousness.”

Most interesting, Gorbachev’s words on Lenin in his 1987 book, Perestroika, were almost worshipful, reverential. A decade and a half later, when Lenin and Gorbachev’s USSR was dispatched to Ronald Reagan’s ash-heap of history, Gorbachev genuflected to Gaia instead of Lenin. He was far from alone.

Oh, well. Yes, this stuff is pretty unbelievable. I know. You can’t make it up.

I, for one, would be amazed if communists had not been involved in Earth Day from the outset. They didn’t need to come up with the idea or organize the thing, but they would have aided and abetted and encouraged it in any way they could.

If you have any information to help me in this quest for truth, please let me know. The informed readers of this excellent website, who have never been naïve about communism or ignorant of the sordid doings of the left generally, might jump in (see “comments” section) and point me in the right direction. Our liberal media isn’t about to do any digging.