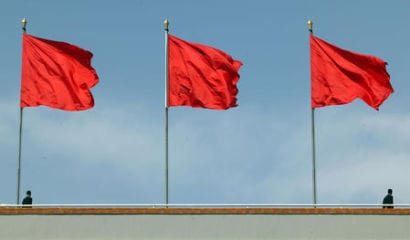 Living the good life on welfare. Even the Europeans recognize that they pay a high price for creating an increasingly dependent society.

Denmark has been transfixed by the revelation of a 36-year-old single mother who collects more in benefits than many Danes earn at work, and has done so for two decades. Worried Karen Haekkerup, Minister of Social Affairs and Integration, people “think of these benefits as their rights. The rights have just expanded and expanded.”

But it’s really not that much different in the U.S., the nominal home of the free. Nearly two decades ago welfare reform briefly captured political attention and won bipartisan support. The effort was a great success. But most welfare programs remained untouched and the gains have been steadily eroded.

Today nearly 48 million people, almost one out of every six Americans, receive Food Stamps. Outlays on this program alone have quadrupled in just a decade. Indeed, the government actively promotes the program, encouraging people to sign up. Other welfare programs also are growing in reach and cost. The Congressional Budget Office recently pointed to “increases in the number of people participating in those programs and increases in spending per participant.” The U.S. isn’t that far behind Europe.

Indeed, America, like Europe, has a veritable welfare industry. A forthcoming report from the Carleson Center for Public Policy, named after Reagan administration welfare chief Robert Carleson, charges that “The federal government has spawned a vast array of redundant, overlapping and poorly targeted assistance programs.” Authors Susan Carleson and John Mashburn count 157 means-tested programs intended to alleviate poverty. There were more than two score housing programs, more than a score of nutrition programs, almost as many employment/training and health programs, and lesser numbers of cash assistance, community development, and disability programs. More expansive definitions count even more programs — 185 total, according to Peter Ferrara.

No surprise, the welfare industry is expensive. Social Security is the single most costly program, but more goes collectively to welfare. Today government at all levels spends around $1 trillion a year on means tested anti-poverty programs. And that amount is just going up and up.

And this is just the start. From 2009 to 2018, figured Heritage Foundation scholars Robert Rector, Katherine Bradley, and Rachel Sheffield, at current rates the federal government will spend $7.5 trillion and states will spend $2.8 trillion on welfare, for a total of $10.3 trillion.

Washington can ill afford such expenditures. Uncle Sam ran more than $5 trillion in deficits over the past four years and is expected to run up a deficit of $845 billion this year. The Congressional Budget Office recently warned that while deficits are expected to decline over the next two years, they then will start rising again to $1 trillion annually. Over the next decade, assuming unrealistically that Congress doesn’t add any new programs or increase outlays for any old ones, the accumulated red ink will be $7.0 trillion.

Alas, this is merely the brief break before the tsunami of entitlement outlays hits. The total unfunded liability for Social Security and Medicare exceeds $100 trillion. To that must be added a long list of contingent, likely, and potential liabilities. Even the Post Office is broke and needs a bail-out! Economist Laurence Kotlikoff estimated total federal indebtedness at an astonishing $222 trillion.

Despite facing financial doom, government provides welfare to “a growing number of people who increasingly are not ‘needy’ by any rational definition,” write Carleson and Mashburn. Wasteful duplication isn’t limited to welfare, of course. Yet abuse of programs supposedly directed at human needs seems especially odious. There are people in need. In their name government is taxing away people’s earnings and wasting the proceeds.

It’s important not to focus solely on money. If the programs worked the amount being spent might not seem so excessive. However, observed Tanner, last year the nearly $1 trillion spent on welfare amounted “to $20,610 for every poor person in America, or $61,830 per poor family of three.” With that kind of spending, no one should still be poor.

Yet when testifying before Congress in 2011, Patricia Dalton of the General Accountability Office refused to “hazard a guess” as to what percentage of federal welfare programs achieved their objectives. She admitted that it “would be good to have a number of how many programs there are, what exactly are we spending, and what are we getting for that money.” Yes, that would be good.

Unfortunately, over the years it became increasingly evident that welfare did much to discourage marriage and work, and destroy family and community. That is, behavioral poverty accompanied material poverty. The result, complained the Heritage Foundation’s Robert Rector and Jennifer Marshall, “has been the disintegration of the work ethic, family structure, and social fabric of large segments of the American population, which has in turn created a new dependency class.” This directly threatens the American vision of self-government by independent citizens.

Yet the system is tenaciously defended by all of the usual interest groups which benefit from extensive federal wealth transfers. President Reagan argued that “The war on poverty created a great new upper-middle class of bureaucrats that found they had a fine career as long as they could keep enough needy people there to justify their existence.” Officials may not exactly scheme to prevent the poor from leaving welfare. But welfare gives many people an interest in preserving existing programs.

One of Reagan’s most notable achievements as two-term governor of California was confronting the seemingly unconstrained growth of welfare spending. Aided by Carleson, Gov. Reagan also opposed proposals by Presidents Lyndon Johnson and Richard Nixon for a guaranteed national income.

Reagan took center political stage when he was elected president in 1980. He brought Carleson to Washington and chose as his domestic policy adviser Hoover Institution scholar Martin Anderson, another trenchant critic of the Johnson-Nixon approach. Reagan made welfare reform one of his priorities, explaining: “States are better equipped than the federal government to administer effective welfare reforms if they are given broad authority to utilize administrative and policy discretion.” However, the House remained in Democratic hands and welfare remained largely unchanged.

In 1996 President Bill Clinton signed legislation that turned Aid to Families with Dependent Children into Temporary Assistance to Needy Families. Federal matching grants became fixed block grants, with time limits and work requirements. The reform, explain Carleson and Mashburn, “reversed 61 years of U.S. welfare policy by ending a recipient’s automatic entitlement to a cash welfare check. It was a good start, one on which Congress and the state legislatures can build a better future for millions of people still trapped by the incentives for dependency that remain in the remnants of the old welfare system.”

It was a very good start. Millions of people were moved off welfare rolls into the workplace. Even many opponents of the legislation were forced to acknowledge the positive results. The good economy was important. But more important was the fact that recipients could no longer in effect marry welfare. TANF was determined to minimize both behavioral and material poverty.

However, the remnants that Carleson and Mashburn speak of remain a significant problem. As Elliott Gaiser recently observed in calling for further welfare reform, “the ’96 welfare reform really only fixed one” program, AFDC. There are 156 to go! Moreover, the Democratic Congress and President Barack Obama together weakened the 1996 reforms, risking a slide back to a 1960s welfare dependency mentality. For instance, complain Carleson and Mashburn: “the Obama administration’s policies have lured tens of millions of people onto the Food Stamp rolls, while loosening eligibility requirements for welfare programs across the board.”

The way back won’t be easy. America has spent decades creating the dependency-inducing welfare industry. The ultimate objective should be to reinforce and rebuild, when necessary the traditional emphasis on personal, family, and community responsibility.

Indeed, this model of outward moving concentric rings of responsibility goes back to the Bible. Individuals were expected to work if possible, and not burden others. The Apostle Paul explained that a Christian who “failed to provide for his relatives, and especially his immediate family” was “worse than an unbeliever” (1Timothy 5:8). The ancient Israelites and New Testament Christians alike created rules and procedures to aid those in need within their communities of faith. Finally, Paul wrote, “as we have opportunity, let us do good to all people” (Gal. 6:10).

Any government role should start only when private provision proves inadequate, and even then begin at the local and state levels. The national government should be the last, not first, resort. Even now we see some government efforts at reform, but primarily outside of Washington. For instance, Wisconsin Gov. Scott Walker plans to require work or job training to receive Food Stamps (now officially called the Supplemental Nutrition Assistance Program).

Carleson and Mashburn detail a state-based strategy in their new study, “Secure the Safety Net: Repeal and Replace the Welfare State.” They look back past the 1996 reforms to Ronald Reagan’s experience in California.

Welfare wasn’t always viewed as Washington’s job. Observe Carleson and Mashburn: “Welfare once was the province of the states, but increasingly has been treated as a federal responsibility. Since the 1960s, when the concept of public welfare radically expanded, federal micromanagement and redistribution of income has grown out of control.” The most important first step that we could take is to push the welfare mass/mess back to the states.

Equally important, the grants would be fixed, with a congressional vote required for any funding increase, and largely unrestricted, with federal oversight limited to audits of expenditures. Explain Carleson and Mashburn, transferring funds directly from the U.S. Treasury “would end federal, ‘Washington-knows-best’ bureaucratic interference and overreach. Governors would be able to design unified welfare systems tailored to best meet the needs of their low-income citizens.”

Obviously states are not perfect and their reputation suffered badly during the Civil Rights era. However, today states are by far more responsible, responsive, and innovative than the national government. The Great Society needs to be replaced by the Free Society. Shifting power and responsibility out of Washington would begin what inevitably will be a lengthy and difficult process.

The current welfare system obviously is bad for taxpayers. It also is bad for poor people. Reform is desperately needed. Congress could begin the process tomorrow by turning national programs into state block grants. America can’t afford to wait.

(Mr. Bandow is a member of the Carleson Center’s Policy Board.)