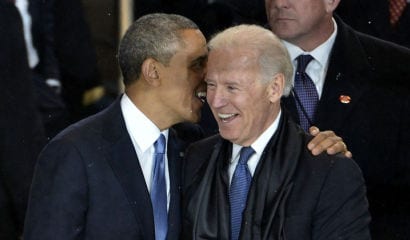 WASHINGTON — It has happened again! Our gaffe-prone president has filed another blunder on his presidential record. At the dedication of George W. Bush’s presidential library he invoked history with his usual mastery of detail. He placed President John F. Kennedy in Air Force One, “On the flight back from Russia, after negotiating with Nikita Khrushchev at the height of the Cold War.”

Actually the flight was returning from Vienna, not “Russia,” and not much “negotiating” had been done. Truth be known, it was one of the lowest points in JFK’s presidency. As Kennedy himself recalled, “He [Khrushchev] treated me like a little boy.” And more: “Worst thing in my life. He savaged me,” said our 35th president. Well, at least President Obama did not claim anyone at the Kennedy-Khrushchev summit spoke “Austrian.” That was the language our learned president attributed to the citizens of Vienna back on April 6, 2009. No philologist has ever heard of it.

As I have noted before, President Barack Obama will be remembered as America’s gaffable president. He nicely complements Joe Biden, America’s gaffable vice president. Remember back at inauguration time when Joe addressed the Iowa State Society Inauguration Ball with “I’m proud to be president of the United States.” By now there have been scores of happy blunders committed by both of these public servants.

I am relatively certain that I am the first to say this in a public forum: Barack Obama and Joe Biden are the most gaffe-prone leaders of a presidential administration in modern times. I cannot think of any conceivable mélange of presidents and vice presidents in recent history who could surpass these two in cloddishness—not Warren G. Harding and Jimmy Carter, not Dan Quayle and Al Gore, not Laurel and Hardy. No, strike that last pair. They never ran for high office. Yet, were they today upright and with all their vital organs functioning, they might have presented a formidable duo, particularly if one, say, Laurel could have presented himself as suffering a trendy modern affliction, say gender ambiguity, and the other, that would be the portly Hardy, could have claimed an eating disorder.

That seems to be how this Obama and Biden got reelected. They had a miserable record, most notably in economics, but they segmented the population. They captured the vote of the unmarried women, who are not very happy. They won the vote of the young people, who will be paying for my entitlements for years to come and the entitlements of the poor and the not so poor. Most minorities voted for them. These voters along with the Democratic majority — often referred to in this column as the moron vote — beat a Republican ticket with the demonstrated skill to right the economy and to guide the country through tricky foreign policy challenges, challenges that Obama-Biden have yet to meet.

So our gaffable president and vice president will flounder along for the rest of their terms, and Americans will hope and pray for the best. In the meantime a news story is beginning to appear with telling regularity. It is the story that speculates on whom the Republicans and Democrats will nominate to represent them in 2016.

Starting around inauguration time Politico and the Wall Street Journal speculated on Joe Biden’s candidacy — ha, ha, ha. Also there were reports in the Washington Post, the Washington Times, and the New York Times that Hillary’s candidacy was practically invincible. Recall if you will 2008 when her candidacy was, with tedious regularity, referred to as “inevitable.” Now she has added Benghazi to her record as the most unpopular and scandal-tainted first lady in history. That, along with her age and questionable health, makes her candidacy very dubious. Then there are stories speculating on the Republicans. There is Chris Christie, Ted Cruz, Rand Paul, Marco Rubio, and Paul Ryan. Now there is Jeb Bush.

All of these stories may be fanciful or they may be based on hard facts, but one thing is certain. Unless you are an angry woman, a clueless young person, or a representative of the moron vote, you have moved on from the election of 2012 and dearly want someone to lead us out of the soup.