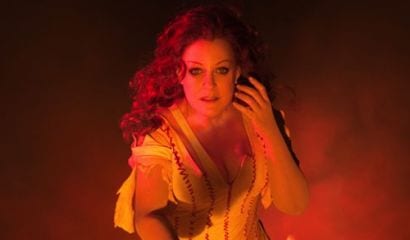 When my husband asked me what I wanted for my birthday this year, I said tickets to the Metropolitan Opera’s production of The Ring of the Nibelung, which is being produced three times this season to celebrate the 200th anniversary of Richard Wagner’s birth. Attending all four operas was an exhausting and emotionally overwhelming experience. It meant getting up at 5:00 am on Saturdays to catch the 6:20 am train to New York City, so I could attend several matinee performances. But it was one of the most exhilarating and satisfying experiences I’ve ever had in the theater.

Yes, I’m talking about the Robert Lepage production featuring a $16 million, 45 ton moving set, so extreme that the Met had to reinforce the floor under the stage to accommodate it. “The machine,” as it is derisively known, has been vilified for making noise and malfunctioning during performances. (I could definitely hear it creaking when I attended.) Yet it is so much more than a device against which to project clever digital scenery and backdrops. It is a piece of abstract sculpture, changing shape and choreographing its movements to illuminate key points in the story and the music. It gives this production a monumental quality like no other, matching the grandeur and scale of Wagner’s music.

Each opera begins with the machine’s 24 planks lined up in the cavernous black box of the Met stage, which gradually transform into the appropriate set. Like musical themes, they are transposed, embellished and sometimes repeated, giving a sense of continuity to all four parts of the Ring. They are particularly effective in conveying Wagner’s big themes of sacrifice, redemption and eternal love in a way I’ve never encountered before. And I don’t know if it was intentional, but there was a lot of biblical imagery in this production that gave it emotional resonance and depth. For example, at the end of Die Walküre, the set rotates perpendicular to the stage so Brünnhilde hangs upside down from the machine, while her grieving father kneels before her. It immediately brought to mind the martyrdom of St. Peter. In Götterdämmerung, Gunther, who is complicit in the murder of Siegfried, tries to wash his bloody hands in the river, which turns red. The biblical references to the stories of Pontius Pilate and Moses are unmistakable. The second half of Das Rheingold, and the entire first act of Siegfried, take place in an underground forge reminiscent of Hell. And then there is the theme of water/the Rhine River, which flows throughout the story, cleansing the earth at the end, obliterating the old order and initiating the new one. Appropriately, this Ring Cycle ends as it begins, with the machine undulating softly in the black box against a blue horizon, emulating the gentle motion of a river.

At times, the machine functions almost like a Greek chorus. In Das Rheingold, it’s a set of stairs suspended in the black box at frightening heights and angles, warning of the danger that lurks in the lower depths of the earth to which it descends. At the finale, it becomes a rainbow bridge for the gods to ascend into Valhalla, and then transfigures itself a starry night. At the beginning of Götterdämmerung, it predicts the coming chaos as the tethers attached to the fates come unfastened and the planks spin wildly out of control. For me, moments like these added a rich layer of emotional content to the production, reinforcing the epic nature of the story and punctuating its musical themes. I found that, rather than detracting from the music, the choreography of the machine complimented the beautiful playing of the Met orchestra, led by Maestro Fabio Luisi.

Another appealing aspect of this Ring was the casting, which featured many talented singers who looked and acted like the characters they were portraying. I heard Jay Hunter Morris as Siegfried. He is not only a compelling singing-actor, but a unique American success story who labored for decades in relative obscurity until the Met gave him his big chance. Several years ago, he took the job as understudy for the Met’s Siegfried because he and his wife were expecting a new baby and he needed the money. In an instructive lesson for us all, he had to wait until not one but two tenors backed out before he got his big chance to sing Siegfried in this new production.

Tall, blond, and still handsome at 50, Morris not only sings the role of Siegfried with energy, musicality, and appeal, but looks and acts the part of a hero. He does not have the typical, darker sounding heroic tenor voice. But to my ear, his lyrical approach brought out the expressiveness and melodic line of Wagner’s difficult music with great poignancy. And it was clear from the performances I attended that the audience was rooting for him; he responded by singing and acting the role of Siegfried with conviction and pathos.

His death scene in Siegfried, where he is stabbed (literally) in the back, and sings while dying, was so wrenching that many in the audience, including me, were moved to tears. In Götterdämmerung, he impersonates his blood brother, Gunther, changing the color and attack of his voice, and even his stance, to sound and look like the singer playing Gunther. In fact, I couldn’t tell which singer was on stage until he removed the “magic” cloth covering his face. The ability to move an audience dramatically is rare in opera. Along with that quality, Morris brings a beautiful voice, physical stamina, and the pacing to get him through this punishing saga.

I heard American soprano Deborah Voigt as Brünnhilde, the pivotal character in the whole Ring cycle. She is also an older artist, who several years ago decided she had enough of being a celebrated, but very overweight diva, had gastric bypass surgery and lost a lot of weight. Some critics carp that she lost her glorious voice, as well. And during some performances, I could hear her wandering off pitch from time to time and belting out some shrill top notes. Despite occasional glitches, she was a captivating Brünnhilde, singing with passion and fiery confidence. She made this much-caricatured role into a believable, tragic heroine, and looked voluptuous enough to inspire lust in the young Siegfried.

Among the many talented singers in this cast, Eric Owens, as Alberich, was a particular joy to see and hear. His huge voice and powerful presence caused the audience to erupt into applause when he appeared on stage. The incomparable Gerhard Siegel gave one of his knock out performances as the evil Mime, which was especially helpful in carrying the audience through some of the lengthy, two-character scenes in Siegfried. Martina Serafin as Sieglinde was another wonderful surprise; she was as riveting to watch as she was beautiful to hear. And the veteran German bass, Hans-Peter König, was chilling as the merciless adversaries of Siegmund and Siegfried. The attention these singers gave to the dramatic, as well as the vocal, demands of their roles gave this production considerable punch.

Another delight was the Met audience itself, which was diverse, friendly, and enthusiastic. I was astonished at the number of young people attending the Ring. I saw fathers standing in line to rent seat cushions for their sub-teen children, who were attending not only the 5-hour long Siegfried matinee, but an evening performance with no intermissions. Young men and women walked around during breaks wearing Walküre helmets. And after the grueling, two-hour first act of Götterdämmerung, young couples perched everywhere on the Met’s grand staircases, enjoying the dinner break with drinks and sandwiches. The presence of so many young people is a tribute to Robert Lepage’s vision; he tried to create a production with a visual wow-factor that would draw in new audiences. And judging from what I saw, he succeeded.

As with any opera, there were details that purists and critics could quibble over in this production. Some of the costumes were duds; the long skirts and breast plates for Wotan, Donner, and Froh in Das Rheingold invited laughter. Not every singer was outstanding. The understudy who stepped in for the ailing Simon O’Neill in Die Walküre was young and handsome, but not yet vocally up to the role of Siegmund. (The audience gave him a spirited ovation anyway, as if to salute his courage.) Some of the special effects were not so special. The dragon in Siegfried looked like a meek puppet from a children’s television show. And the destruction of Valhalla was confined to the toppling of a few statues. Yet the production as a whole was so strong, these missteps did little to lessen its considerable emotional impact.

After Götterdämmerung, I went back to my hotel room and could hardly sleep. The emotional impact of the Ring lingered for days. I felt that after years of listening to this music and seeing it staged, I had finally and fully experienced the power of The Ring, as Wagner intended. I loved the synergy between the visual and musical elements of this production, and the brave use of modern technology to create a mythic landscape that interacts with the singers, and moves and flows with the music. This production attracted considerable controversy when it premiered. But for me, it’s the best realization of The Ring I have ever seen. Kudos to the leadership of the Metropolitan Opera, and the pages and pages of financial supporters listed at the back of the Playbill program, for taking the risk to bring this innovative and moving production to the stage.