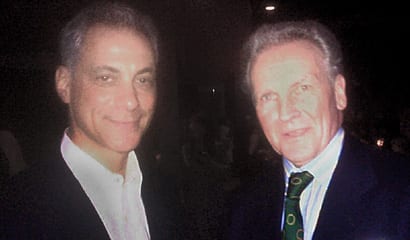 WASHINGTON — How odd! There I was Saturday evening in the Windy City at a fundraising event for the Chicago Rowing Foundation, and who do I encounter but the mayor of Chicago, His Honor Rahm Emanuel? You might recall that back in 2010 I was encouraged by conservative Chicagoans and doubtless by the good government lobby to run against Rahm for mayor, claiming, quite properly, that I had a more legitimate claim to residency in Chicago than did he. What is more, I had a friend on the Chicago Board of Election Commissioners and, it being more important in Chicago whom you know than the merits of your case, I am pretty sure the Republican nomination was mine. In the end I took a pass on the race, but now I am not so sure I will pass it up in 2015. Rahm’s problems mount, and I would relish debating him on the issues. He seemed like a likable fellow when he stopped me for a picture and presumably my autograph. Alas, ushers hastened us to our seats.

I say the encounter was odd because of all the scandals that are now accumulating in Washington: the cover-ups, the infringements on civil liberties, the government encroachments on the press. The last time the left was using the government to hide the truth, to intimidate, and to criminalize free expression was the Clinton Administration, and Rahm was right there in the White House, serving as the big lovable lug of a president’s senior adviser. On February 26, 1998, the White House sent me an autographed copy of the President’s charmless opuscule, Between Hope and History, with an official White House return of address. I still have it among my mementoes from public service. It was sent anonymously, but I have always thought that Rahm had a hand in it. In fact, I ought to have it fingerprinted. It was like receiving a dead fish in the mail from the Cosa Nostra.

The arrival of the book signaled the attacks on The American Spectator in the press and the government investigations, and the dragging of the Spectator’s employees and friends before a grand jury in Fort Smith, Arkansas. It took a year of expensive and mostly silent persecution — when the government is after you the telephone rarely rings. Still, in the end, we were cleared in a way that the Clintons have never been cleared. Exoneration — a word neither Hillary nor Bill has ever heard!

Now we have the Benghazi negligence and cover-up. Anyone who is familiar with Hillary’s career knows that she sweetly conveyed to her aides the same message she conveyed time and again in her long career of abusing power: “Cover it up.” So they did. They created a street protest where there was no protest. They said it was an anti-Islamic video that provoked the violence when it was an organized military operation carried out by allies of al Qaeda. Soon operatives of the White House and the State Department were working full time scrubbing talking points, smearing principled government employees, and, as the implausible White House spokesman Jay Carney said, “the cow jumped over the moon” or words to that effect. Yet the whistleblowers have now told their story of lax security on the ground in Benghazi, a refusal to send in a relief mission, and general imprudence. The negligence and lies are increasingly apparent. It is not just Hillary’s career that is in jeopardy. It is Barack Obama’s presidency.

Then there are Friday’s admissions by Internal Revenue Service Director of Exempt Organizations Lois Lerner of harassment of conservative organizations in 2012. Now it appears that Ms. Lerner’s admissions amounted to mere damage control. According to news reports, her organization engaged in targeting conservative organizations as early as 2010, and the IRS engaged in such activity across the nation. That is to say, that the government agency deemed most menacing by ordinary citizens harassed conservatives with inquiries about their employees, board members, and donors. As the Wall Street Journal editorialized, “there is a pattern here. Oppose the Obama Administration or liberal priorities, and you can become an IRS target.”

Finally there is the Administration’s third scandal of the past week, the Justice Department’s seizure of telephone records from the Associated Press. The news accounts claim the press is really irate. Will the press remain irate at President Obama, at Hillary, at this entire mendacious Administration?

We shall see. Yet one thing I am certain of. Rahm Emanuel is very glad to be back in Chicago. Even if he has some strange run-ins there, it is a lot safer than life in our nation’s capital. What if he were still our President’s chief of staff?