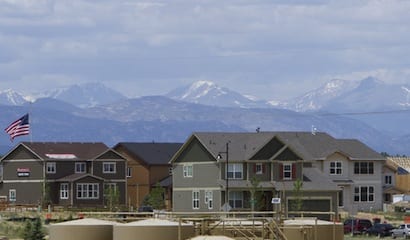 SACRAMENTO — After the housing bubble burst a few years ago, sending real estate prices to the floor in many places, some influential academics and urban planners celebrated the supposed demise of something they had always hated: the suburbs.

In their view, the kind of homes and neighborhoods we live in are tacky, ugly, unsustainable blights.

“Suburbia represents a compound economic catastrophe, ecological debacle, political nightmare, and spiritual crisis for a nation of people conditioned to spend their lives in places not worth caring about,” wrote James Howard Kunstler, a prominent New Urbanist writer who calls for the wholesale reordering of our built environment.

New Urbanists such as Kunstler push for the recreation of the old city model — people living in high rises and apartment buildings, relying on mass transit to get around and shopping at local stores filled with goods produced in the surrounding area. While they make some good aesthetic points, they are elitists who believe we should all live in ways that they prefer.

It’s easy to chuckle at them, as they seize on every crisis (housing bubbles, rising gas prices, etc.) to warn about the coming doom, much like those doomsday preachers who are sure that the latest event is a signal that the world is coming to an end.

But while most of us think only about short-term real estate issues, these ideologues have been changing the laws and building codes to mandate their long-term vision. Given the enormity of suburbia, it’s hard to see the impact of this wide-ranging policy change. But pay attention to debates over new construction, and look at the requirements for higher densities, small or nonexistent yards, construction around transit and other common building mandates. They are designed to make the common form of suburbia obsolete.

“I live where a majority of Americans live: a tract house on a block of other tract houses in a neighborhood of even more,” wrote D.J. Waldie in his 2005 book, Holy Land: A Suburban Memoir. Waldie spoke two weeks ago at the “No Place Like Home” conference in Anaheim, where he described his spiritual connection to the modest Lakewood, California suburb where he has spent his life.

Kunstler described Lakewood, where thousands of homes were built quickly across farm fields after World War II, as “the place where evil dwells,” Waldie said. But it is Waldie’s “beloved community,” a place mocked by snobs but where middle-class people raise their kids and share their lives. These days, the new residents often are immigrants who have come from Mexico or Korea, but they share the same aspirations as those who moved there from places such as Des Moines and Pittsburgh.

The conference defended the ideal of home ownership — something the sponsor, conservative philanthropist Howard Ahmanson, argues is particularly important given “the phenomenon has arisen of syndicates buying up houses in California’s Inland Empire in quantity for cash, to rent out.” Ahmanson’s father had built the Home Savings of America empire that helped many Americans afford a home of their own.

A recent Sacramento News & Review article detailed the results of the re-inflated housing bubble, in which ordinary people have been unable to compete for the purchase of homes with those companies that are buying them in bulk. Sellers, the article noted, won’t risk the uncertainty of an offer made by someone who needs a mortgage when they can take the cash offer from big corporate buyers.

This situation will no doubt pass, but it is a reminder that in many places of the world, people have no choice but to spend their lives as renters. The planners who attack suburbia offer as alternative models the big cities and stylish towns where few Americans could ever afford to live. These are nice places, but not realistic models for the nation.

San Francisco and Carmel, for instance, are wonderful playgrounds for wealthy people, who enact regulatory and land-use policies that inflate the cost of entry and keep out people on normal incomes. Then they lecture us about how much better they are than us because they walk to work and shop only at environmentally friendly local stores. (Note: Despite their pretenses, even trendy San Franciscans pack the big-box stores located under the 101 freeway in the heart of the city.)

Urban elitists don’t recognize that their policies helped create the “sprawl” that they disdain. It’s not as if middle-income San Jose workers would choose to live over the mountain ranges in places such as Tracy, but the growth controls and other regulations that make it tough to build new houses in the Bay Area have so inflated the prices of the existing housing stock that people head into the hinterlands to afford a place of their own to raise their kids.

As conference speakers noted, the home ownership ideal is the backbone of a free and democratic society given that it gives people a stake in the community. That’s worth remembering as today’s planners and officials mock suburbia and design a different kind of future.