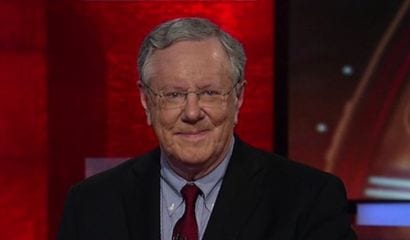 WASHINGTON — Who is Gary Muthert? Well, he is the Internal Revenue Service officer in Cincinnati who gathered applications in 2010—presumably from the Tea Party and other conservative organizations seeking tax-exempt status. He did it, he says, at the behest of a local Cincinnati IRS manager who incidentally remains unidentified. According to transcripts of Muthert’s testimony to the House investigative committee, the unidentified manager informed Muthert that: “Washington, D.C. wanted some cases.” That is to say, Tea Party cases.

Who is Elizabeth Hofacre? She too is an employee of the IRS in Cincinnati. She somehow received Muthert’s cases, and whether on her own or at the direction of someone else she sought help with these cases from the Washington, D.C. office whose purview it is to oversee tax-exempt organizations. This gets complicated. Why were Muthert’s cases not sent directly to Washington as the unidentified manager requested? How did Hofacre get involved?

Then there is Holly Paz. Who is she? Well, she is a career IRS lawyer with vast experience in several IRS posts. She coordinated with the Cincinnati office on matters of tax-exempt organizations. She seems to be pivotal in this smog of named and unnamed IRS officers, but for what?

These three employees of the IRS are but three named employees of that vast and bewildering smog that is emerging from the IRS scandal. If it continues to grow, soon it will drive all intelligent observers away. All these named and unnamed IRS officers have one thing in common. They were dealing almost exclusively with conservatives’ applications for tax-exempt status from 2010 to 2012, which they insist is purely coincidental. That is what we are told.

Oh, and a few more things we do know about Holly Paz. Roel Campos, her lawyer, has notified us that she is “the hero” in this IRS smog. Moreover, she has been placed on administrative leave. And finally she is a good citizen. She contributed $4,000 to President Barack Obama’s election campaign 2008. Her lawyer assures us that “her political preferences have absolutely no impact on the discharge of her duties.” Her donations were just another coincidence.

The IRS is again enmeshed in another political controversy. Franklin Roosevelt was the first American president to abuse the IRS. Then there was John F. Kennedy, Lyndon B. Johnson, and Richard M. Nixon. In the 1990s I myself was visited by the IRS in a curious round of charges against the Clinton Administration’s use of the IRS for political purposes. As I recall, dozens of conservative organizations were then being stalked by government. For a year the Heritage Foundation had IRS officers virtually working in its offices. Then the IRS was mysteriously exonerated by Official Washington — Congress, the media, the White House, anyone who matters. Now it is ensnared once again by claims it has unfairly harassed conservatives and possibly suppressed voter turnout in 2012.

I say it is time to limit the IRS’s reach. It has too much power over the lives of ordinary citizens. As can be seen by the smog of controversy surrounding the current scandal, it is virtually unaccountable. Let us scrap the present tax code for a flat tax. Briefly stated, rid us of the nine-million-word tax code with all its impossible complexity, loopholes, unfairness, and opportunities for IRS snooping. Replace it with a single-rate income tax and corporate tax of 17 percent. A citizen’s income would be taxed only once, encouraging citizens to save and invest, thus encouraging economic growth.

The best flat tax reform I have seen is that of Steve Forbes. It allows for generous exemptions for adults and children. A family of four would pay no federal income tax on its first $46,165 of income. Adults would receive the standard tax exemption of $13,200, and adults earning less would be removed from the tax rolls altogether. Married couples would receive a $26,400 deduction. Heads of single-parent families would get a 30 percent higher exemption in recognition of the burden they bear while raising children on their own. Families would receive a $4,000 exemption for each dependent and a refundable tax credit of $1,000 for each child sixteen or younger.

Under the present tax code, the burden of compliance is excessive, involving vast amounts of time or expense, or both. Under the flat tax almost everyone would pay less. With a flat tax, the present army of IRS snoops could be curtailed along with the huge lobbying efforts that seek special tax treatment for vested interests and lead to unfairness and corruption. There would be no need for the Tea Party to seek special treatment, so there would be no one hounding its members.

One good thing can come from this IRS scandal: the adoption of the flat tax and the drastic curtailment of the IRS.