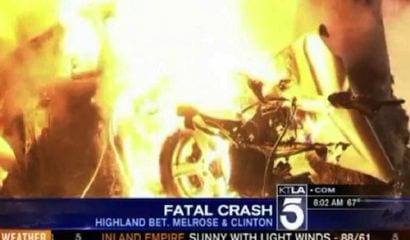 Scarcely had the charred remains of Michael Hastings been pried out of the wreckage of his Mercedes-Benz than conspiracy theorists began to suggest that the award-winning journalist’s fiery death was not an accident. Within 12 hours, it was reported that Hastings had told a lawyer before Tuesday’s fatal crash in Los Angeles that he was under investigation by the FBI. His friends soon confirmed that Hastings had been “paranoid … incredibly tense and very worried” about government surveillance, and the fevered imaginations of the kook fringe cooked up all sorts of wild-eyed claims: Hastings had been “murdered” or “assassinated” by a “car bomb,” perhaps by the CIA.

Welcome to America in 2013, where Hope and Change have transmogrified into Fear and Loathing, where even a liberal reporter who last year praised Obama as “one of the most talented politicians around” could not resist the pervasive paranoia inspired by what voters were once promised would be “the most transparent administration in history.” Between the IRS secretly punishing the president’s political enemies, the Justice Department secretly seizing reporters’ phone records and the NSA’s secret surveillance, the only thing transparent about this administration is its dishonest hypocrisy.

None of this, however, means that Hastings was the victim of anything other than his own irrational recklessness. Driving a turbocharged sports coupe at top speed head-on into a palm tree requires no conspiracy theory to explain why the Mercedes C250 exploded into flames. What does need to be explained is why Hastings was hurtling southbound on Highland Avenue so fast that, when a video camera captured him running a red light about 4:15 a.m., his car was just a silver blur.

Where had Hastings been all night and where was he going in the wee hours of a Tuesday morning? Is it possible that Hastings was driving so fast because he believed he was being pursued by agents of “Obama’s national security state” against which he warned in his final article? Alternatively, had he become so stressed-out — his friend, Current TV host Cenk Uygur, said Hastings was “a nervous wreck” in his last days — that he’d gone on a late-night binge? Hastings had reportedly struggled with drug and alcohol problems in his youth, and he may have been driven to relapse by fear that the feds were after him. And who are we to say that such a fear was irrational?

Certainly, during his career Michael Hastings had made powerful enemies, including many other reporters covering the national-security beat. Hastings won the prestigious Polk Award for his June 2010 article in Rolling Stone that led to the resignation of the top U.S. commander in Afghanistan. But there were critics who accused Hastings of engaging in unfair “gotcha” journalism against Army Gen. Stanley McChrystal, quoting his aides making derogatory comments about civilian leaders under circumstances where these ranking military staffers might have reasonably thought they were off the record. (At one point, during a NATO meeting in Paris, Hastings accompanied McChrystal and his staff to a bar where he described the aides getting “completely sh–faced.”) A subsequent inquiry by the Pentagon’s inspector general found no proof of wrongdoing by McChrystal and disputed the accuracy of Hastings’ reporting, but that was after the general had retired and Hastings won his award.

The disrespectful quotes from unnamed “top aides” about Joe Biden, Richard Holbrooke, and others that got McChrystal fired weren’t exactly headline stuff to anyone who knows how soldiers talk. (Breaking News: Combat Veterans Express Low Opinions of Politicians, Diplomats and Other Civilian Desk Jockeys.) The real value of Hastings’ article was that it finally drew attention to the hopeless reality in Afghanistan, where the United States had foolishly committed itself to a “counter-insurgency” strategy that looked suspiciously like the kind of open-ended “nation-building” exercise Obama had promised to avoid. Other journalists covering Afghanistan had reported on the military problems and the basic futility of trying to create a modern democracy in a land where much of the population is fanatically devoted to 13th-century tribalism. But other journalists didn’t get any generals fired, and it seems they never forgave Hastings for a success achieved by breaking the customary understanding between beat reporters and their sources.

Hastings had a thorough contempt for journalistic customs, including objectivity, which he dismissed as a “fallacy.” As I wrote of him in a profile, Hastings was “a liberal who shared the anti-war, anti-Republican sentiments widespread in his generation of journalists.” Hastings was at least honest about his bias, as opposed to the allegedly objective reporters who cover politics. Most of the young journalists who followed Mitt Romney around on the campaign trail last year may as well have been paid members of Obama’s campaign staff, given their intense commitment to helping defeat the Republican. Journalists have always been predominantly liberal, but recent years have seen an influx of young writers like Hastings who came of age in the anti-war campus cauldrons of the Bush era, and to them the GOP is an enemy more dangerous than any foreign dictator or Islamic terrorist.

Having crusaded to spare the nation of another Republican presidency, young liberal writers like Michael Hastings seemed genuinely shocked by recent revelations of the Nixonian nature of the regime they did so much to help re-elect. Last year, Hastings praised Obama with the enthusiasm of a 12-year-old girl describing a Justin Bieber concert, but two weeks ago he seemed disillusioned. “Transparency supporters, whistleblowers, and investigative reporters … have been viciously attacked by the Obama administration and its allies in the FBI and DOJ,” Hastings wrote, denouncing “Democratic two-facedness on civil liberties.”

Thursday, officials in Los Angeles finally identified Hastings’ remains and said there was no reason to suspect foul play. So maybe his worries about being under federal investigation were just symptoms of his own psychological stress, rather than symptoms of “Obama’s national security state.”

Having lost Hope, it seems, Michael Hastings was overtaken by Fear. He descended into paranoia and, while it’s easy to laugh at conspiratorial talk of his “assassination,” no one can say the Fear was more irrational than the Hope.

Robert Stacy McCain
Follow Their Stories:
View More
Robert Stacy McCain is the author of Sex Trouble: Essays on Radical Feminism and the War Against Human Nature. He blogs at TheOtherMcCain.com.
Most Popular
1
Biden Watch
Joe Biden Versus We the People
by Josh Hammer