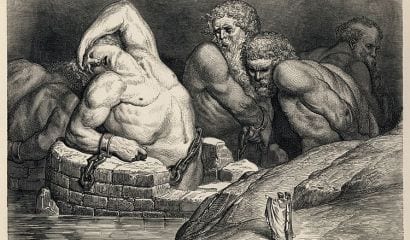 WASHINGTON — Dante Alighieri was the 13th century Florentine author whose Inferno apportioned his sinners’ suffering in Hell to their vices committed on earth with delightful affect. For instance, flatterers are mired in human excrement. Traitors are frozen in a lake of ice. Now Margaret Thatcher’s distinguished British biographer, Charles Moore, updates Dante by heaving the wretched Edward Snowden into Hell.

Moore writes that “it will be entirely fitting if Edward Snowden spends eternity in a Moscow airport lounge.” I might add that the airport lounge is a transit lounge with Snowden transiting from the free world to absolutely nowhere, all under the watchful eyes of the Russians’ Federal Security Service, the modern equivalent of Communist Russia’s KGB. Snowden supposedly worries about the Federal Bureau of Investigation, the Central Intelligence Agency, and, of course, the National Security Agency. Let him sound off to the officers of Russia’s Federal Security Service, and they will teach him a lesson in human rights. By the way, is it possible that he really entered Russia with four laptops containing top secret American intelligence, and no one in the Russian intelligence community has politely asked him to let them see his laptops under penalty of having his arms broken? Frankly this is another absurd aspect of Snowden’s absurd adventure.

On the other hand if he is shipped off to Venezuela, as has been reported, it will be fitting too. There this ignorant modern-day Daniel Ellsberg will be hosted by the phony human rights defender President Nicólas Maduro, whose government desperately fights to control the flow of information worldwide to the Venezuelan public, taking over cable television, hounding the remaining independent press, and, most ironic of all, spying on his citizens’ telephone calls. Venezuela is a human rights mess. Ecuador is a human rights mess. Bolivia is a human rights mess. These are but three of the countries in which this lunkhead seeks refuge. How odd.

The world of Snowden is like no world I have ever imagined. For that matter, so is the world of Julian Assange and his bizarre contrivance, WikiLeaks. In a recent public letter to the president of Ecuador, Snowden wrote that the United States system of surveillance is “a grave violation of our universal human rights.” Whose system of universal human rights is he talking about? What are those rights? Who enforces them? Do they include the right to freely exchange ideas, say in Venezuela, or for that matter in Russia? Do they include the right to freedom of speech, freedom of worship, freedom from want, and freedom from fear? Those would be the four freedoms that Winston Churchill and Franklin Roosevelt deposited into the Atlantic Charter as universal goals before World War II. They sound very nice, but even today they are not universal rights. Try practicing any one of them in areas held by the Taliban or the North Koreans or any of a dozen other regimes that have attracted the vigilant eyes and ears of the CIA, the NSA, and other Western intelligence eavesdroppers.

I do not mean to say that a free society has no reason to fear government intrusion into our freedoms. Certainly the Administration’s excesses at the Internal Revenue Service are a matter of grave concern and require further investigation by Congress and the media. As for the NSA’s system of surveillance, we need to remain vigilant. Yet the NSA is not eavesdropping on law-abiding Americans. It is listening for hints of terrorist activity. It has been remarkably successful in thwarting the bad guys and ought not to be hindered by Snowden, Assange, and the other twits that are out there. To return to Snowden, let us hope he is remanded to American custody and that our government can discover how he got access to all that information that he is now traveling the world with on his four laptops. Then I say try him for treason and put him in a proper prison until he is taken by a divine authority to Hell.