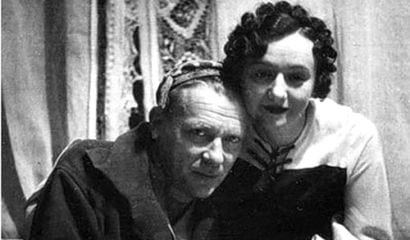 Trapped in the Soviet Union after the Bolshevik revolution, Russian playwright and novelist Mikhail Bulgakov endured a tortured existence in which his work was censored or banned. Reduced to poverty, and in constant fear of “disappearing,” he was forced to write his last work — The Master and Margarita — in secret. The novel is a wickedly funny satire of Soviet bureaucracy and the mendacity and corruption of everyday life in Stalinist Russia. Inspired in part by the story of Faust, it’s also a meditation on the existence of good and evil, as well as the enduring power of love. The novel was suppressed during Bulgakov’s lifetime; a censored version wasn’t published until 1966, twenty-six years after his death. The first complete translation did not appear until 1973.

Since then, the novel has been hailed as a masterpiece of 20th century Russian literature, inspiring films, operas, and stage plays — in Europe, but seldom in America. This summer, however, audiences here can encounter this work in a new stage adaptation by noted Hungarian director János Szász at the Bard SummerScape Festival in upstate New York. Running about two and a half hours long, with a cast of only 13 actors, it is a heartfelt attempt to introduce this important work to contemporary audiences in abbreviated form.

I can’t think of a more daunting challenge than trying to pare down the complexities of The Master and Margarita for a chamber ensemble, as co-adapter Gideon Lester calls this production. It must depict three intertwined stories: the devil and his assistants coming to Moscow and causing havoc, the crucifixion of Jesus Christ and the psychological torment it inflicts upon Pontius Pilate, and the love story between a Russian novelist and an unhappily married woman. The play entails staging a train wreck, a beheading, a crucifixion, a teleportation, a witch flying over Moscow, and the damned being raised from the dead for one night to attend a fancy dress ball. This production presents the main threads of each plot, jettisons minor characters that don’t advance the action, and uses some clever staging to take the audience back and forth between the three stories.

The director wisely avoids attempting to portray the events imagined by the author in a realistic fashion. Instead, the actors narrate the appropriate text from the novel, while the events are suggested through symbols, props, and lighting. Thus, the decapitation of the atheist Berlioz by a streetcar is described by actors, while the event takes place off stage behind a giant light depicting the front engine of a moving train. For the highly stylized crucifixion scene, Christ climbs up on a cross and is poked lightly in the ribs by actors in vaguely Roman dress. When Margarita becomes a witch and flies over Moscow, she runs around the stage, arms outstretched, describing to the audience what she sees below, accompanied by whooshing sounds from the wings. For the Variety Theater magic show, Szász uses the audience as the audience, planting actors in several of the rows and raining down fake rubble notes on everyone from above. For the decapitation of the master of ceremonies at the Variety Theater, an actor with his suit hiked up over his head is dragged around the stage, while the head of the actor playing the decapitated character appears through the cut in the curtain — very vaudeville. And for Satan’s Grand Ball, a crowd is assembled by lowering a silver curtain across the stage reflecting back the images of the audience, each of whom is asked to wear a white mask during this scene.

While this production tinkers with details of the story, the depiction of the ball scene seemed most out of character with the novel. Visually, it’s all wrong. The model for Satan’s Grand Ball was an actual event — a spectacularly lavish fancy dress ball, which Bulgakov and his wife attended, given by the American Ambassador in Moscow in 1935. In this stage version, however, the ball is portrayed as a nightmarish orgy set in something like a 1930s Berlin bordello. It includes topless young actresses who threaten and paw the heroine, which brings me to the issue of nudity in this production.

In the novel, the witches are naked, including Margarita and the devil’s maid, Hella. So I was curious how the director would handle this on stage. The mature actress who played Margarita was mercifully allowed to strip down to her under garments as she transforms into a witch. But in the ball scene, she is dressed in a long transparent garment, with an open back and nothing underneath. Moreover, the young actress playing Hella is completely unclothed in her final scenes, during which she sits or prances around the stage in nothing but high heels and a hat with a long black veil. I couldn’t help but wonder why, in a production devoid of realistic depictions of the author’s fantasy world, this element alone merited such a literal approach. –

Obviously, lots had to be left out of Bulgakov’s plot for this smaller scale production to work. So it emphasizes the love story between the Master and Margarita, giving short shrift to the Pontius Pilot narrative. That’s a shame, because Bulgakov placed some of his most chilling depictions of Stalinist police tactics in the Pontius Pilate sections of the novel. Without this material, many of Bulgakov’s coded references to the resurrection and redemption are missing from the play. This makes the Pilate story somewhat meaningless for audience members who haven’t read the book. Despite this omission, however, there is a lot to like in this production.

First and foremost is the casting of several veteran stage and film actors in key roles. Chief among them is Brussels-born Ronald Guttman as Woland, the devil. Guttman speaks and moves with elegance and refinement, portraying Satan as an urbane, sophisticated, and slightly bored European who’s seen it all. He carries the show. In particular, his economy of movement and modulated voice were a welcome relief in a cast dominated by younger players who seemed to think that running around the stage frantically and screaming their lines was acting. At times, the volume and speed of their recitation obscured the dialogue so much that it was impossible to understand what they were saying. They were encouraged in this approach, no doubt, by the costuming, which dressed Woland’s assistant devils as punk rockers, who saunter around the stage sneering and threatening people. They were a quite a contrast to the silver-haired Woland, who wore a black velvet suit with a red pocket square, snake skin cowboy boots, and a silver-tipped cane. He never had to raise his voice to get the attention of the audience.

Actor-writer-director Arliss Howard brought a very physical approach to the part of the Master, almost like a dancer. Curiously, he chose to emphasize the comic aspects of the character, which is somewhat at odds with the novel. After all, the Master is a stand-in for Bulgakov himself. In the novel, the Master has written a book about Pontius Pilate, and winds up in an asylum after he tries to get his book published and is denounced by critics as a religious believer. This was very close to home for Bulgakov. His educated and cultured family included Russian Orthodox clergy, and both he and his work were viciously attacked in state-run publications. Bulgakov’s despair leaps right out at the audience in the end of Act 1, when the Master proclaims there’s no use making plans or having dreams, and though he wanted to see the world, he had to settle for this one little corner. It’s a reminder that, while never arrested and thrown in prison, Bulgakov was under constant surveillance. His desperate letters to Stalin asking permission to leave Soviet Russia were answered with a phone call from the dictator himself, who intimidated Bulgakov into withdrawing his request.

As Margarita, veteran actress Stephanie Roth Haberle, does a nice job portraying the novel’s brave, long suffering heroine. One of the most poignant scenes in this production is her entrance in a flowing red dress, carrying a bouquet of yellow flowers. She advances slowly and quietly, step by step, towards the Master, as he narrates how they first met and fell in love, with Schubert playing in the background. It’s an exquisite moment. In fact, the director uses classical and rock music quotations very effectively throughout this production to underscore the nature of various characters.

For me, this edgy, pared-down version of the novel brought home the unimaginable sadness of Bulgakov’s life. As a physician during the Russian revolution he contracted typhoid, which shut down his chance to emigrate while it was still possible. As an artist he was reduced to working as a stage hand, when the communists banned the publication or staging of virtually all his work. Pinned down on all sides, the only freedom he had was the world he created in his imagination. In despair, he burned the manuscript of The Master and Margarita, but rewrote it from memory at the urging of his devoted wife Elena (the model for the novel’s heroine).

Bulgakov’s life was shortened by hereditary liver disease, so he didn’t live long enough to see Glasnost. For him, like the Master and Margarita, the only way out was death. Indeed, Bulgakov died before he finished revising this novel. Maybe that’s why this director chose to finish it for him — by having the poet declare in the final scene that anyone who doubts loves endures forever should have his tongue cut out. That’s what this play is all about. But there’s much, much more to the novel. For admirers of Russian literature — and lovers of freedom in general — it’s an essential and haunting classic, well worth reading.