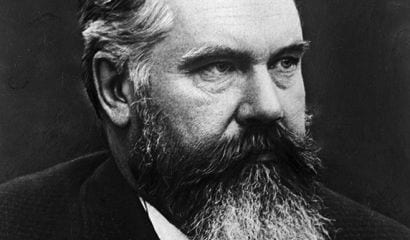 “Awake my furies, a dream is calling!” So says the ghost of Clytemnestra, as she summons The Furies to avenge her murder in Aeschylus’s great tragedy, The Oresteia. This past weekend, The Richard B. Fisher Center for the Performing Arts at Bard College summoned its own mighty forces to resurrect a forgotten masterwork based on this trilogy: Sergey Taneyev’s opera, The Oresteia. With a powerful cast of Russian soloists, a splendid chorus, and a provocative production dreamed up by noted director Thaddeus Strassberger, the four-hour epic flew by, vindicating the decision to stage an obscure work that reportedly hasn’t been mounted in its entirety outside of Russia since 1895.

If you’ve never heard of the composer, you are not alone. In many years of attending opera and concerts, I don’t recall seeing his name on a single program. In fact, I had to look him up in the Harvard Biographical Dictionary of Music, which notes his work is seldom performed outside of Russia. For the record, Taneyev (1856-1915) was a Russian piano prodigy and student of Tchaikovsky. He became a highly respected composer and teacher of harmony and orchestration; his pupils included Scriabin and Rachmaninoff. Apparently, his most influential work wasn’t a piece of music, but a textbook — “Invertible Counterpoint in the Strict Style.”

For a piece composed by someone whose forte was pedagogy, The Oresteia turned out to be a wonderful surprise — indeed, a ravishing work. It is modern — flowing continuously from passage to passage without recitative — yet traditional in its romantic tonal language. It is chock-full of melodic expressiveness and gorgeous orchestral writing, such as the beautiful ascending passages for the cello accompanying the duet for Orestes and Elektra in Act 2, and the lush, inventive use of the harp in Acts 2 and 3. The opera also includes a vocal quartet reminiscent of Mozart at his finest, a duet for brother and sister à la Wagner, resounding choruses and even snippets of glorious church music. Conductor and Music Director Leon Botstein, who anchored the production from the pit with his characteristic assurance, aptly described The Oresteia as a beautiful work. It deserves to be heard by a much wider audience.

From the beginning, it was clear from the big, powerful voices on stage that the audience would be treated to some first-rate singing. All of the soloists — with the exception of American bass Andrew Funk — were recruited in Russia by producer Susana Meyer and director Thaddeus Strassberger. He told me they auditioned more than 100 singers to find their seven leads. Like the composer, these singers are largely unknown in this country because only one of them has ever been to the United States before.

One of the benefits of the Russian cast was their obvious comfort level singing an opera written in their native language. Especially noteworthy was Liuba Sokolova; as Clytemnestra she used her powerful voice to sing with clarity and passion, and brought dramatic credibility to her character. Tenor Mikhail Vekua sang the demanding role of Orestes with great energy. Though small in stature, he projected a big, ringing sound for most of the night. In a few difficult passages, however, he seemed to hold back; it was unclear whether he was having difficulty or just pacing himself for the long evening. (According to his bio, he is covering the role of Yeroshka in the Met’s upcoming new production of Prince Igor.) Baritone Andrey Borisenko (Aegisthus/Apollo) made a strong impression in his Act 1 vengeance duet with Clytemnestra. And as Cassandra, Maria Litke provided one of the evening’s many moving highlights as she extolled her homeland and foretold her own death. Olga Tolkmit’s (Elektra) fresh voice was a good match for Vekua in their duet, and Maxim Kuzmin-Karavaev sang and played Agamemnon with convincing obliviousness to his fate. Finally, American bass Andrew Funk added some punch to the production in his three roles as the Watchman, Servant, and Gatekeeper.

Following the conventions of ancient Greek drama, the chorus is a significant player in this opera. It features many stirring choral passages, all of which were sung with gusto by the chorus of professional singers recruited from New York, and ably prepped by Chorus Master James Bagwell and his team of Russian language coaches. The chorus provided a rousing welcome to Agamemnon, as he returned home from the war. But some of their most beautiful music was in response to Cassandra’s lament in Act 1, and their comment on the deaths of Agamemnon and Cassandra, ending with a plagal cadence on the word “Amen.” The chorus members who played The Furies were especially effective. They were so dramatically convincing I assumed they were actors or dancers, mouthing the words to the music. But no, I was assured they were members of the chorus. Clothed in black lined with red, with red painted mouths, fangs, and spiked hair, they looked something like vampires, which is appropriate for creatures who are supposed to be sucking the life out of Orestes.

This brings me to the production’s scenic design by Thaddeus Strassberger, whose work I’ve seen before and admired. He chose to place this opera in imperial Russia, rather than ancient Greece. An engineer by training, he took his inspiration from a structure– the Stieglitz Palace in St. Petersburg. It’s a once grand mansion that has fallen into ruin, befitting The Oresteia’s theme of a once grand family brought to ruin by savagery and revenge.

The opera opens with a painted scrim, lit to suggest the magnificence of a once splendid palace. As the curtain is drawn back, the mansion’s run down, looted interior is revealed. A security guard enters, and then the chorus, grasping at bundles of orange light bulbs that float up to the rafters like swarms of golden fireflies. Set off to the side of the stage is a giant painting of the ruler of the house — Agamemnon — dressed as a Russian military leader, but with his face scratched out. The multi-level set features a main floor that is tipped towards the audience and slanted from left to right along an incline. Holes both round and square are sunk into the stage floor, used throughout the opera as baths, fire pits, and what looked like a giant mirror. While various elements are added or subtracted, this is the set for the entire evening. Sometimes it worked, and sometimes it didn’t.

For me, the images of ruined mansions, cowed peasants, and imperious nobles worked best in the first two acts. Indeed, the set visually referenced the words of the chorus in The Libation Bearers, when it says “Rise up, proud house, long, too long your walls lay fallen, strewn along the earth.” But the set failed to evoke any kind of Olympian splendor in the final act, which is supposed to take place at the Temple of Apollo at Delphi. In addition, the floor of the stage is ripped up in the last act, making it very tricky to walk on. The director told me this was supposed to signify an interior torn apart by The Furies looking for Agamemnon. But judging from the puzzled comments around me, the effect was lost on the audience. And the awkward movement — the chorus had to walk, single file, around the perimeter of the ripped-up floor — flattened the mood of the last act, instead of evoking a spirit of triumph and redemption. And it didn’t help that Pallas Athena, who saves Orestes by breaking the tie vote of the citizens appointed to judge him, was dressed in a costume that appeared to be a Russian version of Glenda the Good Witch from The Wizard of Oz.

New York audiences are very discerning, and the gentleman next to me commented that the fussy set called attention to itself, at the expense of the singers. Indeed, throughout the evening, singers were tripping on the stage, or losing their footing on the giant wooden logs that were inexplicably strew about. These idiosyncrasies, however, did not derail an otherwise first-rate, musically satisfying production.

I traveled from Washington, D.C. to upstate New York to see this opera. I overheard another member of the audience saying he traveled more than 350 miles to attend. According to Strassberger, this production will be moving much further than that — to the Mariinsky Theater in St. Petersburg, Russia under the baton of Valery Gergiev — when its current run at Bard finishes on August 4th. We’re fortunate to have a chance to see and hear this beautiful and rarely performed work while it’s still within reach.