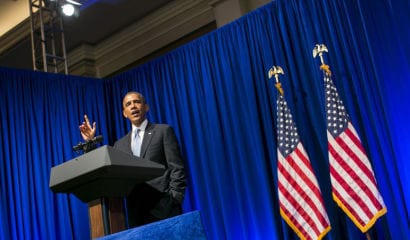 WASHINGTON — Last Sunday the New York Times released a picture of President Barack Obama giving an interview to its reporters in Galesburg, Illinois. Truth be told, he looked surprisingly gaunt. Not to put too sharp a point on it, but he looked desperate! He was in Galesburg to launch another series of speeches on the economy, which reportedly grew at an anemic 1.8 percent in the first quarter and is predicted to have grown even more slowly in the second quarter. During the economic recoveries of the Reagan-Clinton years, the economy grew at 3-4 percent. Our president spoke in Galesburg about income inequality. He ought to be concerned about growth for everyone, not only the middle class or the down and out. The problem is the economy is growing too slowly for everyone.

On Monday he had Hillary Rodham Clinton over to the White House for a mysterious luncheon. It was not made known what they talked about, but my guess is that he asked her for the services of her highly accomplished make-up artist. The creases in her forehead and face run deep from her decades of service to the Clintons’ great cause, namely, winning public office and putting a damper on all the attendant scandals that follow. She has subdued the collateral damage admirably. Now she can come to the aid of the President by handing over her gifted cosmetician. His needs grow with every quarter of economic inactivity.

In historic Galesburg, as he began what must be his seventh or eighth effort to get the American people to swallow his economic hogwash, the strain has been obvious. During his first years in office the wobbly economy was all George W. Bush’s fault. Then it was the Wall Street bankers plus George W. Bush. At some point, even his dutiful supporters among the young, the illiterate, and the women desirous of free birth control are going to ask that he take some responsibility upon himself.

In Galesburg he spoke to a large throng and dissolved into gibberish. “This growing inequality isn’t just morally wrong; its bad economics.” As though he knew something about economics, and then he went on to say, “When middle-class families have less to spend, businesses have fewer customers. When wealth concentrates at the very top, it can inflate unstable bubbles that threaten the economy.” So he wants to tax still more income from the fabled one percent to feed government’s maw. That lessens inequality supposedly, but it also impedes growth. He also wants to end “sequestration” and spend money on such things as “infrastructure,” which does nothing for long-term growth, as the money has to be paid back at some point—hopefully at a time when President Obama is retired to his presidential library in Blue Island, Illinois.

During the Prophet Obama’s presidency the economy has continued to falter. Labor participation has actually declined. In June of 2009 65.7 percent of the nation was at work. This past June the figure was down to 63.5 percent. Moreover, the President appears clueless about how jobs are created and insouciant about plans for creating jobs. On the Keystone XL pipeline he said this weekend that “Republicans have said that [the pipeline] would be a big jobs generator. There is no evidence that that’s true.” He sniffed at 2,000 short-term jobs and 50 to 100 jobs over the long run. By contrast TransCanada, the company proposing the pipeline, claims 13,000 jobs will be needed for constructing the pipeline alone, and on Monday in rejoinder to the President’s remarks TransCanada drew attention to government research showing that the pipeline could create as many as 40,000 new jobs.

Hillary may have been of some aid to President Obama in his quest for a proper pancake. Possibly he will avail himself to Botox? Yet I doubt even her cosmetics expert could help him with the economy. The fact is he is not interested in economic growth. He is a leveler. He would rather have a society in which everyone lives at the same level rather than one in which everyone realizes the potential of his or her talents. Frankly, I believe North Korea or Cuba are his ideal economies. Could we ever have North Korea or Cuba without the rough stuff? It is a thing to contemplate.