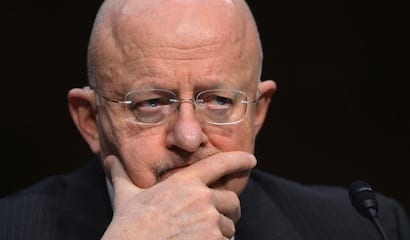 Less than three days after President Barack Obama announced an “independent review” of the nation’s surveillance technologies, the White House has appointed James Clapper, the director of national intelligence, to run the panel.

Let that sink in.

In an announcement posted online Monday afternoon, Clapper’s office said he would run the president’s Review Group on Intelligence and Communications Technologies.

“The Review Group will assess whether, in light of advancements in communications technologies, the United States employs its technical collection capabilities in a manner that optimally protects our national security and advances our foreign policy while appropriately accounting for other policy considerations, such as the risk of unauthorized disclosure and our need to maintain the public trust,” Clapper wrote.

He’s a funny guy to be talking about the need to maintain the public trust.

In March, Clapper was at a congressional hearing where he was asked point blank by U.S. Sen. Ron Wyden, D-Ore., about whether the National Security Agency collects “any type of data at all on millions or hundreds of millions of Americans.”

That statement now appears to be untrue.

Documents leaked by Edward Snowden revealed the NSA to be engaged in multiple efforts to collect cell phone and Internet data from Americans and foreigners. The electronic surveillance dragnet extends to all communications traveling on fiber-optic lines into and out of the United States, all cell phone data like call lengths and locations and the ability to track individuals through their Internet browsing with the cooperation of major corporations like Google and Facebook.

But yes, that very same James Clapper will now lead the investigative effort to determine whether the American government’s “technical collection capabilities” are adequately balancing national security and the national trust.

Obama announced the creation of the “independent” review on Friday.

“I am tasking this independent group to step back and review our capabilities — particularly our surveillance technologies,” Obama said. “And they’ll consider how we can maintain the trust of the people, how we can make sure that there absolutely is no abuse in terms of how these surveillance technologies are used, ask how surveillance impacts our foreign policy — particularly in an age when more and more information is becoming public.”

The entire effort was spurred by senators like Wyden, who was one of 26 senators to send a letter last month to Clapper  – of all people – calling for the review.

As Watchdog.org’s Shelby Sebens reported at the time, the senators asked for information regarding how the Patriot Act was interpreted to allow for the bulk collection of data on the communications of ordinary Americans with no connection to wrong-doing, according to a news release from Wyden.

The senators were seeking examples of how the program is effective, if it is.

In the letter the senators wrote that misleading statements from intelligence officials “prevented our constituents from evaluating the decisions that their government was making, and will unfortunately undermine trust in government more broadly.”

One guess who they were talking about there.

As for the new review group, it will meet for 60 days before relaying its findings to Clapper, who has been instructed to pass them on to the White House.  According to the White House memo announcing the review group – which, it is worth noting, never once uses the word “independent” – the final report from the group is due on Dec. 15.

In a world that makes more sense, James Clapper could be on trial for lying to Congress.

In this world, he will have even more authority over the future of the United States’ domestic spying regime.