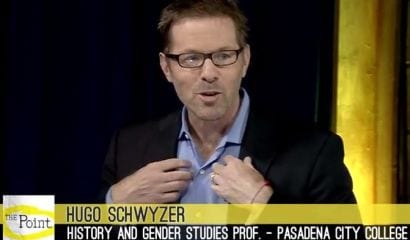 Hugo Schwyzer is insane and is also a college professor, and one imagines his employer using this in a promotional campaign: “Pasadena City College: You Don’t Have to Be Crazy to Teach Here, But It Helps!”

Professor Schwyzer’s madness suddenly burst forth as headline news this month after he first announced that he was quitting the Internet and told L.A. Weekly he had suffered a “mental breakdown.”  But then the professor went on Twitter and began spewing out a series of bizarre confessions, admitting that he was off his medication. His weird online meltdown inspired concerns for Professor Schwyzer’s safety and he was hospitalized again. He told the Daily Beast that he had been to the psychiatric ward three times in the past month and had suicidal thoughts. He told a Daily Caller reporter that he had made a “serious” suicide attempt.

As spectacular as his manic disintegration was, there had been clear warning signs for years that Professor Schwyzer was a sex-crazed lunatic. However, the red flags of mental illness were evidently ignored by the administration of Pasadena City College (PCC) and Professor Schwyzer’s peers, perhaps because sex-crazed lunatics have become so commonplace in 21st-century academia.

More than two centuries have passed since the statesman Edmund Burke beheld the French Revolution and defended British conservatism:  “We are not converts of Rousseau; we are not disciples of Voltaire. Atheists are not our preachers; madmen are not our lawgivers.” What Burke said of England in 1790 cannot be said of America in 2013, where atheists and madmen and the disciples of radical philosophers hold high office and other positions of prestige. Nowhere do these radicals enjoy more influence than in our nation’s institutions of higher education. We need look no farther than Chicago, where erstwhile fugitive bomber Bill Ayers now collects a pension from the University of Illinois system as a retired professor of education. Ayers was denied the title of “professor emeritus” because he once co-authored a terrorist manifesto that was dedicated to several comrades in the “anti-imperialist” struggle, including Robert F. Kennedy’s assassin Sirhan Sirhan. However, another of Ayers’ radical comrades is now President of the United States, so we can’t say the disciples of atheist madmen are without influence.

Among other radical causes, Ayers and his fellow Marxists in the Weather Underground were sexual revolutionaries, invoking the slogan “Smash Monogamy” to justify their occasional orgies and multiple short-term liaisons with partners of both sexes. Haphazardly screwing around failed to overthrow capitalism, but their rhetoric of politically inspired perversion had an impact, especially within the campus milieu where their anti-American ideology had been nurtured in the 1960s. College faculties had for decades harbored ideologues of deviance, including the famous fraud Professor Alfred Kinsey of Indiana University, whose methodologically flawed studies became the “scientific” basis of the sexual revolution, and Marxist theoretician Herbert Marcuse, who taught at Columbia, Harvard, and Brandeis. Marcuse has been called the “father” of the 1960s New Left movement; his books Eros and Civilization (1955) and One-Dimensional Man (1964) can most easily be understood as a synthesis of Marx and Freud, and popularized the Left’s now-common conflation of sexual and political “repression.”

Whereas Freud had understood the need to repress chaotic sexual impulses, however, Marcuse encouraged the view that industrial capitalist culture led to an “inauthentic” sexuality, so that sexual “liberation” was a necessary component of the radical agenda. This was by no means a new idea; Karl Marx’s colleague Freidrich Engels in 1884 published The Origin of the Family, Private Property and the State, identifying the traditional family as the fundamental basis of the capitalist order. Marcuse’s colleague Theodor Adorno was lead author of a notorious 1950 study, The Authoritarian Personality, which depicted traditional families as the breeding grounds of a crypto-fascist menace. It is perhaps not an insignificant coincidence that The Authoritarian Personality was a project of the University of California at Berkeley, where Adorno’s co-authors Daniel Levinson and Nevitt Sanford were members of the psychology faculty, and where the New Left later emerged in the Free Speech Movement of 1964.

The spirit of those 1960s radicals, who often waved the Viet Cong flag in their anti-war protests, nowadays marches under the rainbow banner of sexual liberation. No one on the 21st-century campus can disapprove of homosexuality without being branded a hater, and the rhetoric of the gay rights agenda is nowhere more fanatically espoused or officially endorsed than at America’s colleges and universities. Militant homosexuality coexists with militant feminism on campus; for example, the Women’s Studies department at DePauw University offers a course called “Queer Theory, Queer Lives.” New York University’s Center for the Study of Gender and Sexuality is directed by Professor Ann Pellegrini, a Harvard alumna who lists “queer theory” first among her areas of research; the center has in the past year hosted events on “Queer Africa,” “Queer Asia” and “A New Queer Agenda.” (One suspects perhaps the Old Queer Agenda was becoming obsolete.) The overlap of feminism and “queer theory” is not accidental. “Feminism is the theory; lesbianism is the practice,” pioneering feminist Ti-Grace Atkinon proclaimed in 1971, and Professor Bettina Aptheker, who teaches Feminist Studies at the University of California-Santa Cruz, has proclaimed that lesbianism is the “highest state of feminism.”

Given the prevailing norms of sexual scholarship in academia, what’s a heterosexual male professor to do? Evidently, Hugo Schwyzer’s solution was to declare himself a progressive feminist and teach classes on pornography. He carved out a career in the field of gender studies despite the fact that his degree was in medieval history. “My mother was a second-wave feminist,” Schwyzer said in a 2011 interview. “I was raised in the 1970s with ‘Ms. Magazine’ on the coffee table and strong feminist values.… I took my first women’s studies course early in my college career…. I fell in love with women’s studies. But I was leery about majoring in it in the mid-1980s. I didn’t know any guys who did that. So I took a lot of gender-themed classes and majored in history instead.” While still working toward his Ph.D. at UCLA, he was hired at Pasadena City College in 1993 and showed his “strong feminist values” by having sex with college girls. “Before 1998 I slept with two dozen female students, somewhere in there, it’s a ballpark thing,” he told the Daily Beast last week. “That ended when I had a similar but not as bad a breakdown to the one I had now. When I got sober, I made amends to the college and swore off sleeping with students.”

By the time Hugo Schwyzer “got sober” at age 31, he had already been divorced twice, and had recently been dumped by an 18-year-old student, which “sent me spiraling rapidly downward.” He attempted murder-suicide with an ex-girlfriend, a stripper and fellow addict he had met in rehab two years earlier. None of this, however, prevented Schwyzer from becoming a tenured professor with an annual salary of more than $90,000, a published author and columnist featured at The Atlantic and at the feminist site Jezebel.com. Evidently, no one bothered to check Schwyzer’s credentials as a self-proclaimed “expert on body image, sexuality and gender justice.” As he told the Daily Beast, “I pretended regularly to have more credentials than I actually did,” admitting that the ease of his acceptance as “a very well known speaker and writer on feminism” with no more qualification than having taken two undergraduate women’s studies classes was “a little odd.”

Actually, there was a lot odd about Schwyzer’s career, but he may have seemed fairly normal among the lunatic perverts employed by sex-crazed academia nowadays. Three years ago, Columbia University political science Professor David Epstein was arrested for having an incestuous affair with his adult daughter, and subsequently copped a plea deal, but remains employed at the prestigious Ivy League school. One of Epstein’s Columbia faculty colleagues, Professor Theo Sandfort, was for many years affiliated with the Dutch pedophile journal Paidika and is co-author of the 1990 book, Male Intergenerational Intimacy, a “scientific” justification of pederasty. At a Yale University “sensitivity training” workshop in March, bestiality and incest were among the topics in a discussion that the student director of the event explained was intended “to increase compassion for people who may engage in activities that are not what you would personally consider normal.” A survey of the workshop participants found that 9 percent said they had sold sex for money, and 3 percent said they’ve had sex with animals.

Of course, Schwyzer was not fired for his crazy perversion. Tenured professors can never be fired. Instead, PCC put him on medical leave, so he’s still collecting his $90,000 salary. His fourth wife left him and the professor is now reportedly recuperating at his mother’s house with the help of five different psychiatric medications. But he is certainly not alone in his madness, which is merely symptomatic of how American academia has lost its collective mind.