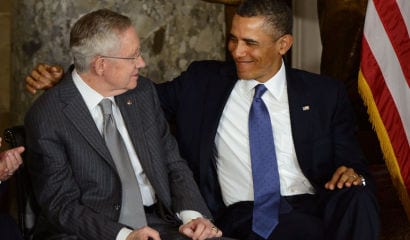 Democrats and their media allies have spent the past week labeling Republicans “anarchists,” “fanatics,” “radicals,” and “terrorists” who are wholly to blame for the situation that we are told will soon lead to a government shutdown. And if all you know about this situation is what you get from the media, you might actually believe that this is a crisis created by Texas Sen. Ted Cruz and his fellow conservatives who sought to use the vote on a short-term spending bill as a means of preventing implementation of the Affordable Care Act (ACA), otherwise known as Obamacare.

Here’s a simple question: Why are we currently funding the federal government through a series of short-term measures known as “continuing resolutions”?

The answer is that the budgeting process has completely broken down in recent years, and the two men most responsible for that breakdown are President Obama and Senate Majority Leader Harry Reid. For three consecutive years — 2010, 2011, and 2012 — the Democrat-controlled Senate did not pass a budget bill because Reid knew that it would be a political liability to do so. Passing a budget that detailed the Democrats’ plans for spending and revenue as official policy would have exposed the “something for nothing” swindle that Reid and his colleagues are perpetrating on the American people. Republican challengers campaigning against Democrat senators could have cited their votes for the budget bill, saying that the incumbent voted for this, that, or the other unpopular component of the measure.

Reid and the Democrats knew this. They knew very well that the federal deficit was spiraling out of control, that there was not enough tax revenue to pay the mushrooming cost of entitlement programs (Medicare, Medicaid, food stamps, unemployment, et cetera), and certainly there wasn’t enough revenue to pay for all the boondoggles and giveaways the Democrats voted for in the name of “stimulus.” Adding to this, there was not enough revenue to pay the cost of Obamacare, which Democrats rammed through Congress in March 2010 on a party-line vote. Passing an actual budget would have made clear the unsustainable fiscal nightmare into which Democrat policies have plunged the nation during the Obama Age, and so Harry Reid simply didn’t pass a budget for three years.

Inevitably, there will be serious fiscal and economic consequences for what has been done in Washington since 2009. Democrats, however, cared less about such real-world matters than they did about the short-term political gain to be had by promoting the pleasant fiction that liberal “generosity” with taxpayer money (including trillions of dollars in deficit spending) had no real cost. The political project of electing and re-electing Democrats required this exercise in fiscal unreality, and so began Reid’s policy of avoiding the painful choices inherent in the budget process. As a direct result of Reid’s irresponsible policy, Americans are now faced with what is being described by many in the media as a “budget” battle, but is in fact about the short-term alternative to an actual budget, a continuing resolution which would authorize the government to keep spending more money than it has, by borrowing billions of dollars it has no feasible plan to repay.

You wouldn’t know any of this from media coverage of what is being portrayed as a Republican-induced crisis for which conservatives like Ted Cruz are to blame. Contrasting this misleading coverage against the actual facts of the situation, we might imagine Barack Obama and Harry Reid are sitting in the newsrooms of America’s newspapers and TV networks, dictating the story line to reporters and commentators. No such dictation is necessary, however, because our nation’s news organizations are overwhelmingly staffed by partisan Democrats. Readers will please excuse a slight digression here. As Rush Limbaugh has often remarked, media bias is so pervasive that if all he wanted to do was to complain about it, he could fill the airwaves 15 hours a week with nothing else. Yet the current showdown in Washington is a perfect example of how harmful this bias is.

If America’s journalists had ever told the truth about what Barack Obama and Harry Reid have done, neither of them would be in office now. Only a fool would claim that electing Mitt Romney to the White House and putting Mitch McConnell in charge of the Senate would have magically solved the federal government’s fiscal problems. A $17 trillion national debt is not amenable to quick fixes. However, the defeat of Obama and Reid would have ended the pathetic political charade that is now being played out in Washington, where the Democrats are depicted as the voices of responsible leadership, while Cruz and other conservative foes of Obamacare are excoriated as reckless demagogues. This false portrayal of the current situation is the exact opposite of truth, but it is widely believed because the journalists who did so much to re-elect Obama (and to defend Reid’s Democrat Senate majority) have continued to act as partisan propagandists. Often, the prevailing prejudices of the press corps are described as “liberal bias”; explaining this as a matter of ideology or philosophy, however, is unnecessary to describing the basic political allegiance of news industry personnel to the Democrat Party. Every study of the voting habits of American journalists shows an overwhelming preference for Democrats. The Media Research Center has compiled an exhaustive collection of such studies, some showing that reporters are eight times more likely to vote for Democrats than for Republicans.

This disproportionate partisan tilt has significant consequences, including the bizarre unreality of how conflicts between Republicans and Democrats are portrayed. Democrats, having come to expect favorable treatment from the media, are permitted to act and speak irresponsibly, knowing that they will be depicted as heroes in the media narrative, while their Republican opponents will be depicted as villains, merely for being Republicans. (The only “good” Republicans, of course, are those who echo liberal denunciations of such conservatives as Cruz.) It is only within this warped funhouse-mirror view that anyone could believe the things Democrats have been saying in the current crisis, much less take them seriously.

“We’re not going to bow to tea party anarchists who deny the mere fact that Obamacare is the law,” Harry Reid said last week. “We will not bow to tea party anarchists who refuse to accept that the Supreme Court ruled that Obamacare is constitutional…. Obamacare is the law of the land and will remain the law of the land as long as Barack Obama is president of the United States and as long as I’m Senate majority leader.” Never mind, of course, exactly how Obamacare became law. Never mind Nancy Pelosi’s memorable claim that Congress would “have to pass the bill so you can find out what is in it.” Never mind the 34 House Democrats who joined Republicans in voting against it. Never mind how, in the mid-term elections eight months after that vote, Republicans won a historic landslide, gaining 63 House seats to obtain a majority even larger than Newt Gingrich won in 1994.

The history of Obamacare must be forgotten in order to suppose that Reid’s defense of this controversial and unpopular measure is more reasonable than the opposition of the Republican conservatives whom Reid labeled “tea party anarchists.” Of course, when it comes to real anarchists like the deranged mob that emerged two years ago as the “Occupy Wall Street” movement, Democrats were far more understanding. The media didn’t point that out to Harry Reid, however, nor did anyone in the press corps seem to note the irony when White House senior adviser Dan Pfeiffer compared Republicans to terrorists: “What we’re not for is negotiating with people with a bomb strapped to their chest.” You can insert your favorite Bill Ayers joke here, but the president’s avowed refusal to negotiate with his domestic opponents could also be contrasted with his foreign policy, as I remarked on Twitter: “Maybe if the Republican Party would change its name to ‘Iran,’ Obama would be willing to negotiate with them.”

John Boehner and Mitch McConnell don’t have a secret nuclear weapons program, nor are conservatives “anarchists,” and this week’s elaborate government shutdown drama is an exercise in political kabuki theater, made possible only because Democrats know that the media won’t inform the electorate what this is really all about. Instead, the media echo and amplify Democrats who blame the crisis on “extremists” in the GOP, distracting from Democrat Party failures that are the actual cause of the crisis. The federal government is $17 trillion in debt, and every day must borrow nearly $2 billion more just to keep going. Barack Obama has offered no detailed plan to fix that problem, and neither have Harry Reid, Nancy Pelosi, or anyone else in the Democrat party. So in order to continue their fiscal irresponsibility, Democrats demand that Congress pass a short-term spending measure — without any GOP additions that would hinder implementation of Obamacare — and expect their allies in the press corps to assist them in misrepresenting this situation as entirely the fault of Republicans.

People who unquestioningly accept the media’s pro-Democrat propaganda are “mainstream.” And people who insist on telling the truth are extremely extreme extremists.