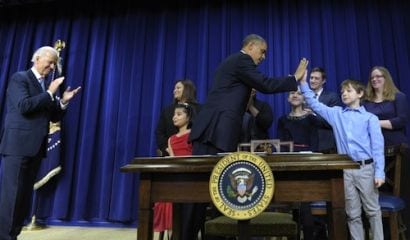 Samuel Johnson’s famous late 18th century quote – “Patriotism is the last refuge of the scoundrel” – has been much misinterpreted and abused by scoundrels over the intervening years. Of course Johnson was not putting down the honest patriot, against whom he held no brief. Johnson was saying something important about scoundrels, not about patriots.

As was demonstrated again Wednesday morning at the press happening staged by the tag team of Biden (the dog) and Obama (the pony), modern scoundrels are versatile, able to enlist many more things than patriotism to promote their scams. In the current climate, the more effective hustle than appeals to patriotism is the popular chant: “It’s for the children.” This immunizes even the most crackpot and/or self-interested schemes from criticism, because who wants to be against the children? This approach paralyzes the marks.

Demonstrating that he not only never wastes a crisis, but never misses a cheap trick, Obama shamelessly trotted out four innocent children to act as props for his pitch for policies he and his evil sprites have wanted for ideological purposes years before Americans knew where Newtown, Connecticut, was. We can only be thankful that these four charmers didn’t fall prey to abortion, one of the sacraments of the First Church of the Democratic Party. When Obama croons that he will do all he can to control guns if it saves the life “of just one child,” he omits to remind us that children must be born to become objects of his cloying compassion.

Restrictive gun policies that Obama and the cultural left are and have been flogging at the same old stand forever have almost zero chance of making the world safer for the four children on stage with Obama Wednesday, or for the rest of the nation’s children and adults. But they will certainly restrict the freedoms of Americans, and perhaps even make our streets less safe as criminals ignore all the new laws that law-abiding citizens obey.

Pushing these hopeless nostrums will allow Obama, Biden, et al. to appear to be doing something about a national horror when in fact the level of risk to all and sundry remains unchanged. To push for these tired old non-fixes for an existential problem, one must be either cynical or stupid. In the cases of Obama, Biden, and the rest of the gun hysterics, alert TAS readers can make up their own minds which label applies in which instance.

On a related matter, I can’t wait for the Biden/Obama press happening on home swimming pools. As Biden and Obama are so keenly interested in the safety of American children, surely we will hear from them on home swimming pools. Many more American children drown in home swimming pools each year than are killed in shootings. A multiple more, in fact. So surely America will soon hear this administration’s pool control policies. What about a five-day waiting period before signing a contract to have a home pool installed? A background check before diving into the deep end? I’m sure Nanny Bloomberg can come up with some sensible depth restrictions. Perhaps the water can be locked away in a safe place when no one is swimming in it.

Sarcastic jest, of course. The cultural left in America doesn’t hate home swimming pools. It hates guns. So while the left continues to attempt to separate Americans from their guns, American children will continue to swim at their own risk (of course most parents are responsible and see that this risk is minimal). The grief of parents who lose children to drownings at home will be as heart-felt as that of Newtown parents. But it will remain private (as is proper) because it’s not a crisis that can be exploited by the left.

Scoundrels don’t change. They are ever with us. And children will always be better protected by attentive parents and teachers than by opportunistic politicians who enact useless or even counterproductive laws.