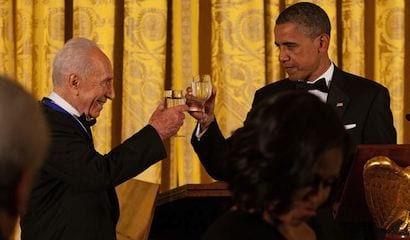 One of the most distinguishing features of President Obama’s foreign policy has been its visceral hostility towards the State of Israel.

In another move to assuage the Arab and Muslim world, the Obama Administration refuses to identify Jerusalem as the capital of Israel.

Obama has personally called for Israel to give up land to the Palestinians based on its pre-1967 borders.

Obama criticized Israel for not making “bold gestures” concerning peace with the Palestinians. Yet where are the bold gestures by Palestinians to stop honoring terrorists who murder Jewish civilians or to stop printing textbooks which incite hatred against Jews as a precondition for negotiations?

Commenting on the expansion of so-called settlements just last month Obama said with his usual condescension, “Israel doesn’t know what its own best interests are.” Israeli Prime Minister Benjamin Netanyahu sharply responded in an interview:

Then there’s his appointment of Chuck Hagel as Secretary of Defense. The man who said, “The Jewish lobby intimidates a lot of people up here.”

Yet when Obama makes his first state visit to the Jewish State next month, he will be bestowed with Israel’s newly created Presidential Medal of Distinction.

I kid you not.

Barack Obama is a true friend of the State of Israel, and has been since the beginning of his public life. As president of the United States of America, he has stood with Israel in times of crisis. During his time as president he has made a unique contribution to the security of the State of Israel, both through further strengthening the strategic cooperation between the countries and through the joint development of technology to defend against rockets and terrorism.

Peres’ statement contradicts a 2010 statement by Michael Oren, Israel’s Ambassador to the United States. Oren said, “Israel’s ties with the United States are in their worst crisis since 1975… a crisis of historic proportions.” If Peres considers Obama to be a true friend of Israel then I guess we can expect Mahmoud Ahmadinejad of Iran, Mohamed Morsi of Egypt and Syria’s Bashar Assad (if he is still in power) to receive presidential medals from Israel. Barack Obama deserves Israel’s Presidential Medal of Distinction about as much as he deserved the Nobel Peace Prize. At the very minimum, Peres is diminishing the value of Israel’s highest civilian honor. With friends like Obama who needs enemies?

For those unfamiliar with Israeli politics it should be noted that the position of President is a ceremonial one with no political power. But given that Peres has been a central figure in Israeli politics for over half a century his words still yield authority.

Now I am sure that Peres is reciprocating Obama for bestowing him with the Presidential Medal of Freedom last year. Why wouldn’t two socialist heads of state honor one another? But I am also sure that Peres is honoring Obama to stick it in the eye of Israeli Prime Minister Benjamin Netanyahu. Peres and Netanyahu are old political rivals and there is as little love lost between them as is there is between Obama and Netanyahu. When Netanyahu became Israel’s Prime Minister for the first time in 1996 it was Peres he defeated.

Late last year, during the Israeli election campaign, Peres ruffled feathers first by calling for the renewal of negotiations with Palestinian Authority President Mahmoud Abbas and then a day later suggested that Israel should initiate direct talks with Hamas. Last summer, Peres repeatedly said that Netanyahu should not attack Iran without consulting the United States. Translation: Netanyahu must not attack Iran without Obama’s permission.

While Peres is a fervent admirer of Obama, the same cannot be said for the Israeli populace at large. As it stands now, only 14 percent of Israelis think Obama is pro-Israel. Given how little Obama has endeared himself to the people of Israel it will be interesting to see if he will be greeted by protests not only when Peres honors him but from the moment he sets foot on Israeli soil.