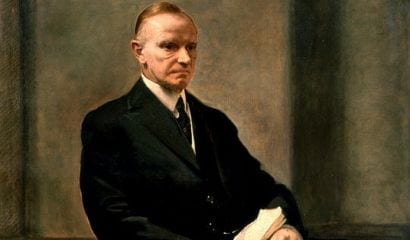 WASHINGTON — I am indebted to Amity Shlaes for gently correcting a joke of mine that dates back to July 8, 1972. On that date in the New York Times I joshed that President Calvin Coolidge “probably spent more time napping than any President in the nation’s history” and therefore was a successful president. My joke was a play on an earlier joke by H. L. Mencken, and now Shlaes has corrected both of us. She has written a very impressive biography titled simply Coolidge wherein she never mentions Cal’s naps but rather what made him one of the most successful presidents. He reversed the economic insolvency of President Woodrow Wilson, and set the economy on the road to growth, a road made rocky by Cal’s successor, President Herbert Hoover, and rockier still by Hoover’s successor, Franklin Roosevelt.

Though one would not know it today, Coolidge presided over a very successful economy in the 1920s. Vice President Coolidge came to the presidency on the death of President Warren G. Harding in August 1923 and won the presidency outright in 1924 with 54 percent of the vote over the Democrat, John W. Davis, who had 28.8 percent of the vote, and the Progressive, Robert M. La Follette, who won just 16.6 percent of the vote. Moreover, Coolidge had won every race he ever contested from his first run for city councilman in 1898 to the governorship of Massachusetts in 1918, usually by astoundingly large margins. His combination of civility, effectiveness, standing by the law, and, as president, tax cuts, budget balancing, and growth was wildly popular with American voters, as was his singular asset, taciturnity.

He even outdid President Ronald Reagan on the economy. Reagan inherited President Jimmy Carter’s anemic economy. He cut taxes and with Paul Volcker as his guide cut inflation. He put the economy on a growth curve for years thereafter. Yet, as Shlaes points out, he failed to reduce the deficit — though he did reduce it as a percentage of GDP — and he failed to cut the federal budget.

Coolidge did. In fact, he cut the top income tax rate to 25 percent, three percentage points lower than Reagan’s historic 1986 tax cuts, and the economy grew. Coolidge reduced the national debt from $28 billion to $17.65 billion with a combination of economies and tax cuts. He actually balanced the budget. When, in 1929, he returned to his Massachusetts home he left the federal budget smaller than it was when he had arrived in 1921. Of equal importance, the economy was now solidly growing.

The unemployment rate that was at 5.7 million in July 1921 had dropped to 1.8 million. Manufacturing had climbed by a third since 1921 and iron and steel production had doubled. Finally, the revenue acts of 1921, 1924, and 1928 represented strong growth despite tax reduction. Something was working.

Coolidge’s secretary of the treasury, Andrew Mellon, called it “scientific taxation.” Today we would call his tax plan supply-side economics. By cutting marginal tax rates Coolidge and Mellon goaded economic activity and raised tax revenue. Yet through all the years of his presidency Coolidge along with his secretary of the treasury Mellon had to fight off big spenders, not only the Democrats but also those Republicans infected with a kind of influenza for Big Government called progressivism. There were great projects such as the hydroelectric project called Muscle Shoals and there were noble gestures such as the veterans’ pensions that kept the pressure on the Administration to spend and tax and burst the budget.

Cal resisted most of these impulses with his pocket veto and fifty vetoes, but it wore him down. In 1927 he cryptically signed a message to the world, “I do not choose to run for President in Nineteen Twenty-Eight.” Hoover ran and returned the progressive impulse to Washington.

So, Ms. Shlaes, I was wrong. Coolidge was a great man but not because of his napping. He accomplished what he accomplished by cutting taxes and cutting budgets. It took a lot of energy and it took fortitude.