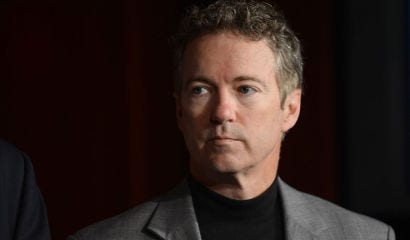 Senator Paul rose ostensibly “to begin to filibuster John Brennan’s nomination for the CIA.” Yet he aimed higher. As he explained it in the Washington Post on March 10, “I wanted to sound an alarm bell from coast to coast. I wanted everybody to know that our Constitution is precious and that no American should be killed by a drone without first being charged with a crime. As Americans, we have fought long and hard for the Bill of Rights. The idea that no person shall be held without due process, and that no person shall be held for a capital offense without being indicted, is a founding American principle and a basic right.” Thus he filibustered for 13 hours, and his views redounded around the Internet, on Tweeter, on Facebook. Everywhere!

Senator Paul is a Tea Party senator. He does not tailor his message to the pollsters’ wise counsel. His staff does not include handlers with political antennas. Frankly I doubt there was much advance notice to his filibuster. He just went out and did what he thought was called for by events and the result was astounding. Millions of people, many who had never thought much about drones and due process, listened and took his side. My guess is that this moment is going to last. Senator Paul has come into his own, and what I know about him suggests that he will be a major figure in the Republican Party for years to come. He has his mind on the issues that matter.

This is what the Tea Party does so well. It raises awareness around the country about the slovenly way government is dealing with finances. It focuses attention about shoddy government in Washington and about constitutional issues that are being ignored. The Tea Party cares about those issues because they are essential to our freedom. Senator Paul believes that American rights as embedded in the Constitution are being endangered. After his performance on the floor of the Senate, millions of other Americans now share his concern. He may just possibly have given the Tea Party movement a digitalis. He may lead us into 2014 midterm elections not unlike the 2010 midterm election. There is a frisson of excitement about his performance that is not going away.

It would be a mistake to read too much into Senator Paul’s triumph at this stage. Senator John McCain and Senator Lindsay Graham went way too far in denouncing him. But the jury is out as to how Senator Paul will perform on the world stage. The Libertarian worldview flirts a little too closely with isolationism, for my money. But Senator Paul has plenty of room to grow there, and he made a very successful trip to Israel that indicates he wants to grow and maintains an open mind.

We will see if President Obama does as well. He just installed at the Pentagon the most anti-Israel cabinet official in memory, and at the State Department a secretary who, two generations ago, carried the arguments of our communist enemies into the Vietnam War debate. He also installed as head of the CIA a director who, in John Brennan, is closer to the Arab line than any recent top spymaster has ever been.

It was Brennan on whom Senator Paul focused his now famous filibuster. On February 20 Senator Paul inquired of John Brennan whether “the President has the power to authorize lethal force, such as a drone strike, against a U.S. citizen on U.S. soil, and without trial.” On March 4 Attorney General Eric Holder answered Senator Paul’s inquiry with an inconclusive statement of boilerplate. Holder’s letter opened more questions than it resolved. He should have answered “no.” That Senator Paul knew to focus his attack this way suggests he is a shrewd player and that the old guard who have stood so firm in our long war against Islamist terror would be wise to spend less time denouncing him and more time trying to win him as an ally.