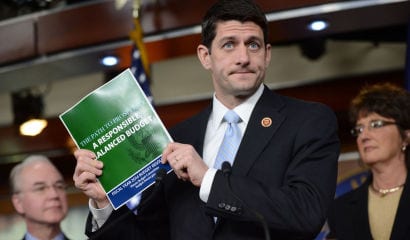 This great conservative policy achievement quickly came under fire from several quarters on the Right, probably unfairly. The House budget is not a retreat from conservative goals — to the contrary, it’s a roadmap toward achieving them.

The most important characteristic of the House Budget is that it is balanced. The plan ends the Bush-Obama era of trillion dollar deficits and balances the budget by 2023, the last year of the budget window. It does this by reducing the rate of spending growth, not by raising taxes. Spending is scheduled under the budget to grow by an average of 3.4 percent annually, instead of the 4.9 percent annual growth expected under current law by the Congressional Budget Office (CBO).

This modest restraint in the growth of government spending is hardly draconian. Annual budget outlays still grow by over $1.4 trillion between 2013 and 2023. Yet even this level of self-control results in a considerable reduction in the government’s burden on the economy. Throughout the budget window, federal expenditures as a percentage of national output (the only accurate way to measure such things over long periods of time) decline from 22.2 percent of the economy in 2013 to 19.1 percent in 2024. CBO’s historical tables tell us that this low level of government spending was only matched in six of the previous forty years. Spending stays at roughly this level forever, since the budget fixes the unfunded entitlement crisis at the heart of America’s fiscal problems long-term. By any definition, reducing government spending this much is a huge win for conservatives.

The budget builds on the success of welfare reform in the 1990s by adopting a similar model for Medicaid, food stamps, and the other remaining federal entitlement programs. These would be block granted to the states, which would then be free to innovate and design better systems free of federal strings. When given this opportunity with cash welfare payments, the country saw caseloads cut in half.

Turning to taxes, the House GOP budget is revenue-neutral. That may or may not be consistent with what you’ve read in the conservative press. The budget envisions no changes in what revenues taxes will bring in under current law. That means that tax revenues are anticipated to bring in about 19 percent of economic output fairly durably over the budget window. This does not mean, however, that the tax system remains unchanged.

The budget empowers the House Ways and Means Committee to fundamentally reform and simplify the tax system to be more pro-growth. There are currently seven individual tax brackets, with a top rate of 39.6 percent. These will be collapsed into two brackets of 10 and 25 percent. The corporate income tax rate will drop from 35 percent today (which, when combined with state corporate income tax, is the highest in the developed world) to 25 percent (closer to the average rate our competitors pay). The Alternative Minimum Tax (AMT) would be repealed.

Some conservatives have complained that the tax revenues assumed are too high. They would prefer that the tax level in place at the end of 2012 be the one that the new budget adopted. There are three principal objections to this. First, tax law was permanently changed when President Obama forced the country over the fiscal cliff. To pretend that never happened is to deny the reality of the world as it is. Second, the dissenters’ baseline is arbitrary. So long as we’re cherry-picking baselines, why stop in 2012? Why not go back to 2010, when there was no death tax, for example? Third, the budget keeps revenue the same but reforms the system to be more pro-growth. It changes the tax code root and branch, the opposite of accepting bad tax law.

The House budget repeals Obamacare. This measure alone shaves $1.8 trillion in federal spending over the next decade. That means no exchanges, no individual or employer mandates, no insurance market regulations, no unelected Medicare rationing boards in Washington, no conscience-impinging mandates, and no subsidies to purchase government-approved health insurance. It also means that all the tax revenue being raised by Obamacare will instead go toward lower marginal tax rates for everyone. The Medicare cuts in Obamacare are transformed into Medicare reforms for those decades away from age 65.

Looked at altogether, Paul Ryan’s House budget plan is a governing document. It’s written down — something Senate Democrats have been unable to do for several years running. If implemented, it permanently ends the entitlement crisis, reforms the tax system for this century, ends Obamacare, and pays off the national debt.

Conservatives should be proud to support it.