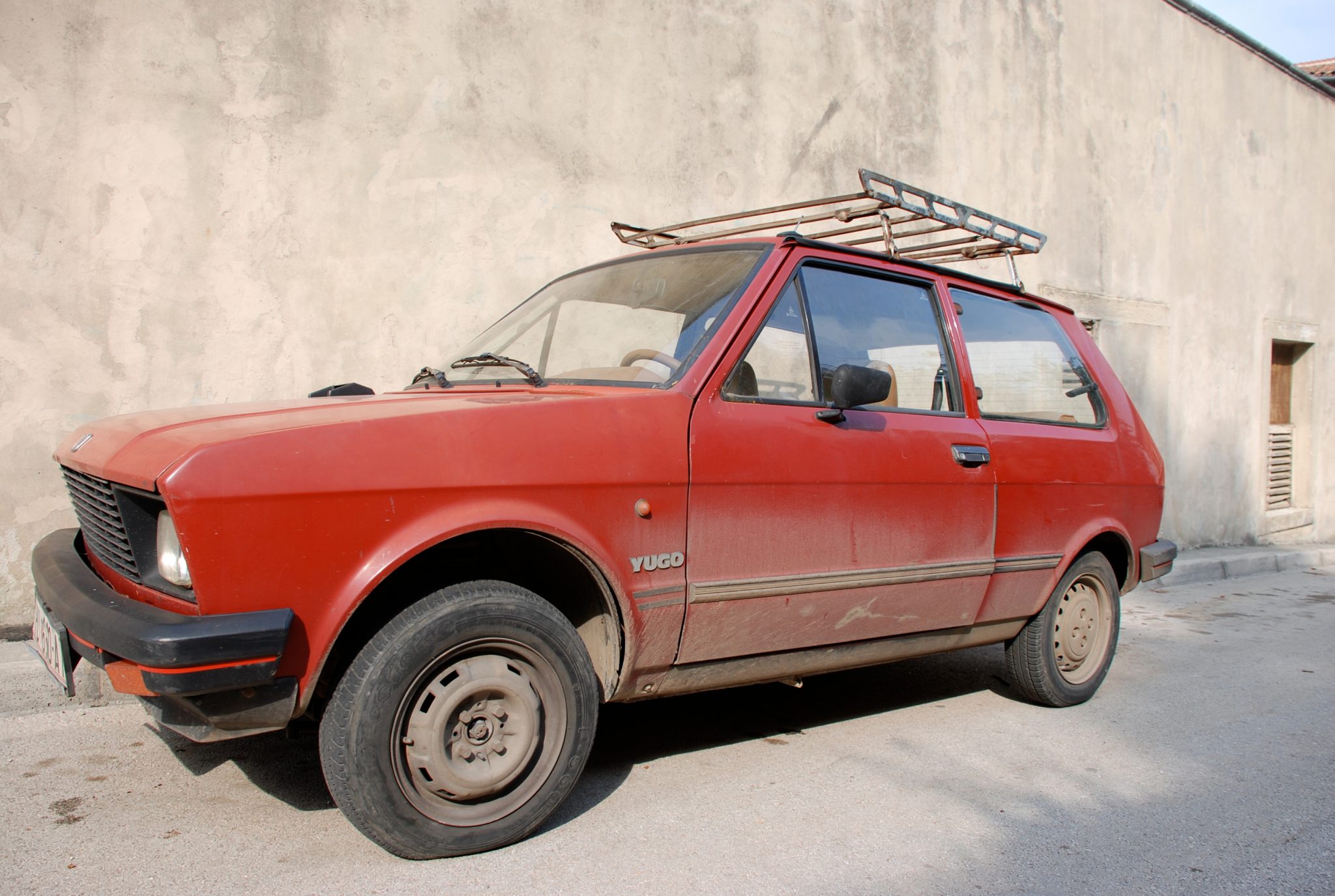 The joke goes like this: How do you double the value of a Yugo?

Fill up the gas tank!

The Yugo was like a good-natured alcoholic uncle, always getting into trouble, sometimes hitting you up for $20.

Perhaps because the Yugo was easier on the eyes. It wasn’t a beauty. But it wasn’t an aesthetic atrocity.

It also wasn’t trying to look like something more than it was, as so many current cars desperately try to — with their puff adder/angry samurai facial styling, gaping grilles, and preposterously oversized “rims.”

It was without question easier on the wallet.

An ’85 Yugo thus cost about 40 percent less than the least expensive new cars one can buy today, models like the $14,295 Mitsubishi Mirage and the $15,395 Nissan Accent. Those cars do come standard with air conditioning, power windows, and a not-bad stereo — all of which cost you extra in the Yugo, if they were even available.

But that was just the point. You didn’t have to pay extra if you couldn’t afford to. That option is no longer offered with new cars. What good is AC if you can’t afford it?

And so it was.

Like them, the Yugo was a new car almost anyone could afford to buy, which it was precisely because there wasn’t much to it. A small, simple engine. A manual transmission. Windows, rolled down by hand — and the breeze, to keep you cool. For free!

It had no airbags or computers.

It barely had tires.

And the Yugo was quicker (and faster) than both the old Beetle and the Model T. It could reach 60 in about 16 seconds, and it had a top speed of 86 mph — about twice as fast as a Model T.

It wasn’t that bad.

And the other two weren’t all that good, either — in terms of their being (unlike modern cars) in need of frequent cajoling in order to keep them running. But all three had the same virtue of being cars you could keep moving, even if meant pushing them at times.

Like its antecedents, the Yugo weighed half as much as most modern cars — about 1,800 pounds. Which meant you could push it, literally. And you could also push-start it because it had a manual transmission, something very few new cars even offer anymore. Those come standard with electronically controlled automatic transmissions that cost more to replace when they fail than a Yugo itself did back in ’85.

And the manual roll-down windows usually worked. If they didn’t, a set of vise grips on the stub where the handle was before it fell off would do the trick.

Same for the shifter, which sometimes came off in your hand. At least you could reinstall it, using your hand rather than a diagnostic computer.

Reviewers then — and now — mock the cheap plastic used in the Yugo for … everything. The extruded dash, the door panels. The trim and switchgear. But that is precisely why it was cheap. Yugo wasn’t trying to make it nice. Just serviceable. And it’s worth pointing out that modern cars that cost 40 percent more than a Yugo are also made of cheap plastic — inside and outside.

Only they aren’t cheap.

They have entirely plastic “bumpers” (technically, bumper covers) that are so flimsy they often tear completely off the car in low-speed impact that would have bent the Yugo’s external (and metal) bumpers. These were painted black so you could spray-paint them black again for the cost of a $3 can of spray paint if they got scraped.

The headlights were made of glass, which never yellowed like the cheap plastic headlights of today’s cars, which do — and which also cost a great deal more than $25 each to replace when they crack, as the Yugo’s did (and didn’t, being made of glass).

And the Yugo was funny — a quality that isn’t even optional with new cars, which take themselves (and your “safety”) so very seriously that they’re a lot less fun. They are like IRS agents. The Yugo was like a good-natured alcoholic uncle, always getting into trouble, sometimes hitting you up for $20.

Who would you rather hang out with?

The Yugo didn’t pester you to buckle up. If you wanted to adjust the radio, you didn’t have to stop first (as you do to hook up your iPod to the Bluetooth in new cars), and while it sometimes stopped running in the middle of the road, it wasn’t designed to stop running at every red light, as almost all new cars do.

It was the source of many stories, told many years after the fact — which makes it something else almost no new cars are, no matter how much “better” they may be as transportation than the much-mocked Yugo:

I miss that. And cars like that. We had more fun back then — even if we sometimes did get stuck by the side of the road.