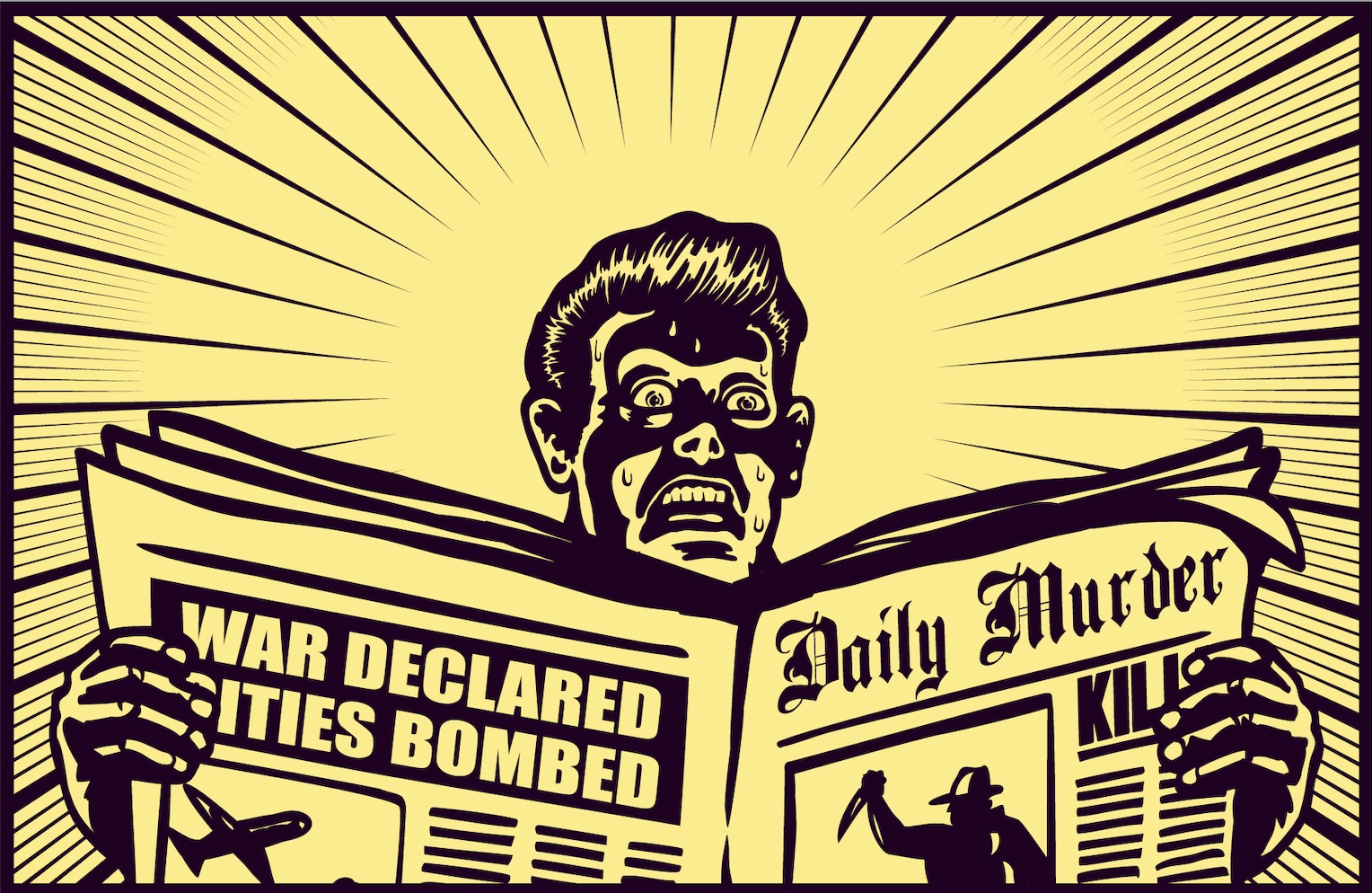 Every morning we are greeted by blaring headline news telling us how many more of our neighbors have been infected by the “life-threatening” coronavirus, with the total now nearing eight million stricken Americans.

CNN’s Wolf Blitzer was typical: “Everyone should be afraid of COVID.”

Blitzer was reacting to President Donald Trump’s statement upon leaving the hospital after testing positive for the virus: “Don’t be afraid of Covid. Don’t let it dominate your life.”

So why do the media and the experts use big numbers to scare older — and younger — Americans? Any number of deaths is scary, which is why the evening news highlights even one or two murders every night.

Didn’t he know he was supposed to be frightened? This expectation is more than the normal kneejerk media overreaction to Trump. It goes to the fundamentals of how the media and intellectuals generally exercise their control over most politicians and the public.

As New York Gov. Andrew Cuomo put it: “People see the numbers going up. Close everything! Close everything! It’s not the best way to do it but it is a fear-driven response. The virus scares people.… The fear is too high to do anything other than: let’s do everything we can to get the infection rate down now. Close the doors. Close the windows. That’s where we are.”

The Center for Disease Control and Prevention and the National Center for Health Statistics (ages 75–84) report that between February 1 and October 3 of this year, 52,618 people in the president’s age group have died from COVID-19. But 519,488 of that age group have died from all causes during that period. That means coronavirus represented merely 10 percent of fatalities even for the more susceptible elderly.

Still, the numbers are scary. Yet old people like me do get sick and die more than younger ones.

Actually, there are not eight million Americans who have been afflicted by the “fatal pandemic,” but closer to 80 million according to CDC best estimates — 10 times higher. Why do the media not report this even more alarming number? Because it would then have to compare it to the death rate, which the same data show is only five-tenths of 1 percent for those over 70 who contract the disease — the most vulnerable part of the population — and that 40 percent do not even have symptoms or even know they had it.

President Trump is attacked mercilessly for comparing coronavirus to the flu, but according to CDC data for last year, there were 490,000 hospitalizations and 43,500 deaths from flu, with 57 percent of deaths occurring among the elderly. But the media do not hype this or call for lockdowns during flu season. Among the 80 percent of those estimated to have caught the flu, the majority did not go to a doctor, and 5 to 25 percent were symptomless, similar to COVID-19.

The Wall Street Journal’s Holman Jenkins is the rare journalist who reports the actual mortality rate for the coronavirus, and he also notes that the CDC’s and most of the world’s experts’ actual goal from the beginning — which it keeps rather quiet — was to “flatten the curve,” to presume the virus will affect most of society and just try to flatten it out so hospitals are not overwhelmed as it increases. But in a democracy with a yellow journalism media one cannot directly say that the government experts want more people to get ill. So the media and the experts ignore this important fact, such as the media-admired Angela Merkel courageously announcing back in March that all Germans should expect to contact the virus. The CDC originally claimed that the virus was not contagious to humans and then that the virus would kill two million Americans and that U.S hospitals then would be overwhelmed. None happened.

The facts by themselves, then, do not justify the degree of fear we are told to feel multiple times every day. So why do the media and the experts use big numbers to scare older — and younger — Americans? Any number of deaths is scary, which is why the evening news highlights even one or two murders every night.

Why would media misreport something as serious as a virus pandemic? Fear is a — perhaps the — primal human reactive trait. We are all fearful, and from the time of the caves the wily and powerful have taken advantage of that fact to dominate, bully, and manipulate others to gain advantage. The strong use power and the intelligent use their wits, both of which are the basis for all leadership and elites, with the wily intellectuals and politicians mostly on top in modern democracies.

In the U.S., intelligence expert Angelo Codevilla explains how this process works. Our “pretend-meritocratic” elite universities turn out graduates who are taught that their expertise and intellectual status grant them a “monopoly access to truth and goodness,” which leads to “administrative and material power” for them to lead their inferiors. This status develops a “technical-intellectual contempt for the rest of Americans,” the “deplorables,” which makes them the gatekeepers to society’s good things. Their “foundational proposition” is that “the American way of life suffers from excessive individual freedom and insufficient latitude for experts to lead each into doing what is best for all.”

After spending 10 times more on education than in 1950 and $22 trillion fighting poverty and racism since the 1960s, the only result for many families and children has been to become dependent on elite payments, while government and their contractor employment doubled with salaries substantially higher than persons “who actually perform services that people want.” The newly dependent are then expected to support their betters, Codevilla argues. As Joe Biden put it for one group, “If you don’t vote for me you ain’t black.” Elite concern is not really about the president but “the millions of Americans whom they loathe, who voted for Trump, who gave his party control of House and Senate, and who will surely vote for folks who these potentates really should fear.”

So, given the media appeal to the risk-adverse Left, it is not a surprise that Gallup now finds that Democrats are highly supportive of pandemic restrictions, with 77 percent of Democratic men and 80 percent of Democratic women saying they are worried about getting the coronavirus, as opposed to only 29 percent of Republican women and 20 percent of Republican men. Gallup likewise reports Democrats are substantially more supportive of strong measures to restrict most social and economic behavior to avoid it. Most Republicans of both sexes are not. One reason for expert support for these same strong measures might be that 72.4 percent of the members of the Society for Epidemiologic Research identify themselves as “liberal/left leaning” compared to merely 4.4 percent identifying as conservative/right.

In spite of the panicked coverage of the coronavirus by the mainstream media and their supporting intellectual and scientific experts, there is beginning to be a reaction. Some courts have recently criticized lockdowns as excessive and discriminatory, especially against religious services, and small business relative to gambling parlors and large corporations. Three leading scientists posted a Great Barrington Declaration, which calls for an end to the lockdowns and returning life to its pre-pandemic norm and then concentrating all efforts on protecting the most vulnerable segments of the population.

These scientists reported that it was their “grave concerns about the damaging physical and mental health impacts of the prevailing COVID-19 policies” that inspired them to break the expert silence. Since its release, more than 11,000 medical scientists, 30,000 medical practitioners, and more than 500,000 members of the general public have signed up for simply telling the truth about the pandemic.

Donald Devine is senior scholar at the Fund for American Studies. He is the author of America’s Way Back: Reclaiming Freedom, Tradition, and Constitution, Political Management of the Bureaucracy, and his forthcoming The Enduring Tension: Capitalism and the Moral Order from Encounter Books. He served as President Reagan’s director of the U.S. Office of Personnel Management. He can be followed on Twitter @donalddevineco1.