by Dov Fischer
Beautiful trees near the University of Oklahoma (Kit Leong/Shutterstock.com) 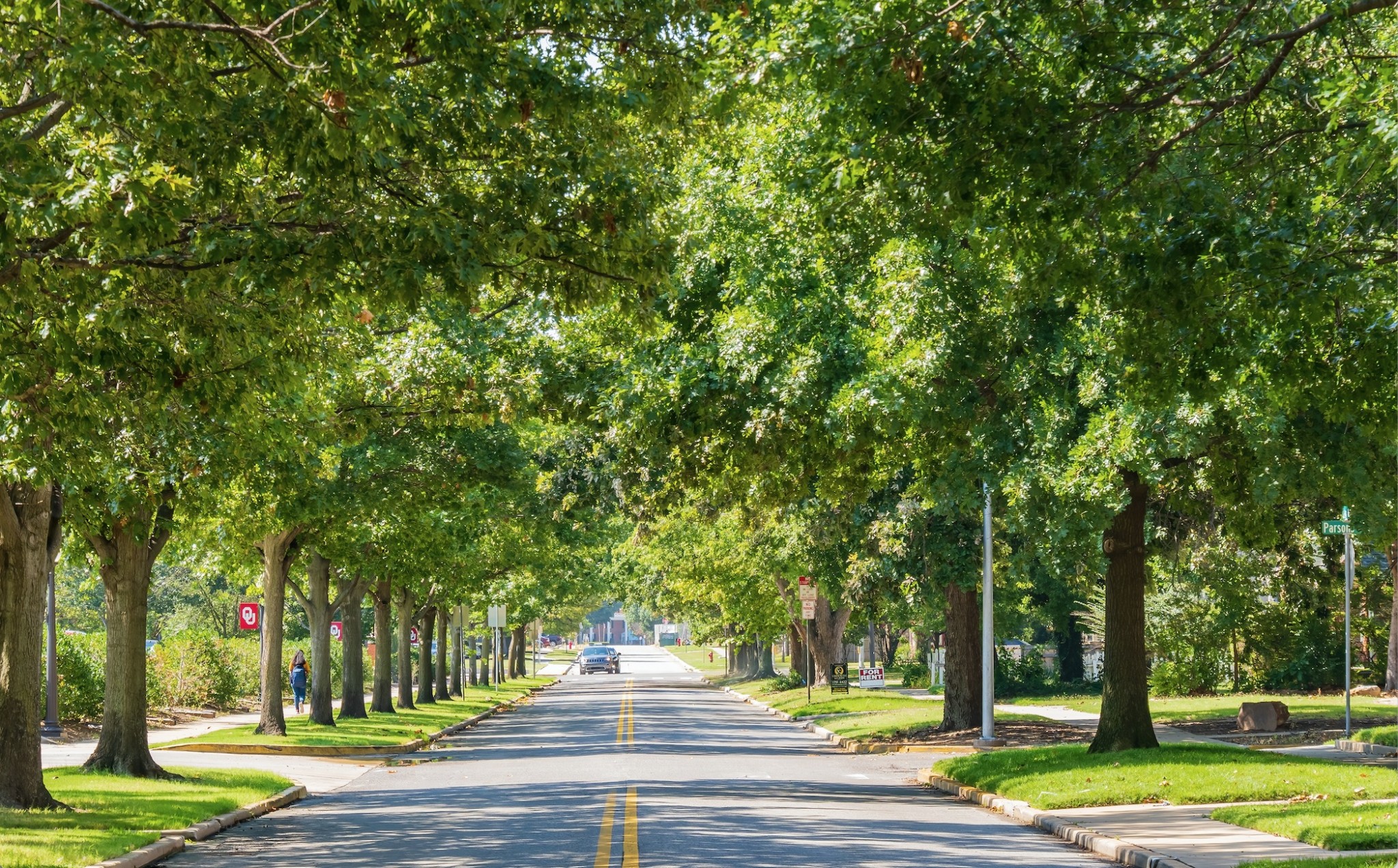 In my prior article, I wrote of the flood tide of people exiting California for states like Florida, Texas, Nevada, Arizona, Idaho, and Montana. Ben Shapiro’s “Daily Wire” was a prominent corporate emigrant, as was Elon Musk’s Tesla before he even started making news over Twitter. The Middle Class is streaming out of California as the state imports Illegals to assure a massive population and voter replacement, assuring that the state remains a deep blue one-party woke state.

For those who wonder how Illegals — who may not vote — can change and replace a voting population, an explanation:

1. All their new-born babies are American citizens if born on this land. The babies born 18 years ago to Illegals imported into California under George W. Bush now vote. The new ones will vote in eighteen years.

2. Their children and teens press for “DREAMER” status. Sooner or later, they will get it from either a Democrat or RINO president. Guaranteed — and everyone knows it.

3. The Illegals themselves get amnesty. Reagan gave it, and others will also. Let twenty years pass, and then a future Biden will talk of the unfairness of denying citizenship to people who have lived here twenty years without incident, pay taxes, speak English, and never get arrested.

That is why the Democrats, who historically opposed illegal immigration because it wipes out Black lower-class workers, changed. The Democrats figured out, from what has transpired in California, Arizona, New Mexico, Nevada, and Colorado — all historically ripe rosy red states — that voter replacement works, that massive importing of ten million Illegals can change states that gave us Reagan, Nixon, Deukmejian, Sheriff Joe, Governor Jan Brewer, and Sen. Paul Laxalt, etc. into blue one-party Democrat states or purple electorates. Once the Ten Million are landed, even a Donald Trump finds that he cannot honor his centrally defining campaign pledge to deport them.

And what about Black voters? Democrats have learned, perhaps to their own surprise, that Blacks are in their pockets, like modern-day slaves on the plantation, unable to free themselves from their masters’ shackles. (Remember Massah Joe on that Black radio show? “If you don’t vote Democrat, you ain’t Black.”) No matter how badly Democrats destroy Blacks — their employment opportunities, their incomes, their schools, their life prospects, their family units, their inner-city neighborhoods, and their very lives — Blacks will vote 90+ percent Democrat. As a result, Democrats have evolved to disregard Blacks altogether, just mouthing a few platitudes to keep them on the plantation: “Black lives matter,” “Racist!” “Systemic Racism,” “Critical Race Theory and Studies.” Inasmuch as Blacks can be blown off because they will vote Democrat no matter what, the damage Illegals do to Black opportunities does not deter Democrats from importing millions more Hispanic Illegals for voter replacement at the expense of the Black community. Note, in this context, that the Black population remains stuck — like forever — at 12 percent of America, while Hispanics now way-outnumber them. So of course Hispanic Illegals take priority.

Against all this background, Middle Class Whites are fleeing California. Many of them are deeply conservative Republicans, and they will bolster states like those listed above: Florida, Texas, etc.

The problem is, as I explained in my prior article, that many liberals and progressives also are fleeing, too foolish and oblivious to realize that it is they who destroyed California. They literally are running away from the dystopia they themselves created from a Garden of Eden as they elected political leaders to implement their woke beliefs — Gascon and other Soros DAs, massive handouts to “The Homeless” (assuring that homeless from out of state flow in for the kinds of benefits that the Dakotas, for example, will not give them), no spaces for many of their own kids to attend colleges in the University of California because so many seats now are set aside for children of Illegals, racial set-asides that disadvantage even woke Whites, gasoline at $7 a gallon, and no plastic straws unless you can show connections to Hunter Biden.

Accordingly, it is imperative that red states keep the Woke out, to prevent them from tilting the electoral balance in those states. Yet, the Constitution does not allow that kind of ban. So how keep them out?

Ron DeSantis and Greg Abbott have shown the way. Red states must enact dramatically conservative laws that will force California’s woke émigrés to think twice: tough abortion laws, tough rules barring or deporting Illegals to other states (ideally to Delaware, which is blue anyway, is tiny, and is Biden’s home base), tough driver’s license laws, tough voting laws, tough laws on public schools, laws as favorable to religion as the Constitution can bear.

Since parents care especially about their kids, red states should introduce dramatically right-wing public school curricula that teach both sides of the “climate change” truth and a generally patriotic 1776 History curriculum that will inculcate right-wing values into children, sending little children home every night telling their parents that they learned today in school that Presidents Washington, Jefferson, Jackson, Lincoln, Reagan and Trump were six of the best presidents we ever had, while Woodrow Wilson, FDR, and Obama almost destroyed the country. The new curriculum could be called “American Patriotism and Constitutional Values.” There is absolutely no law that impedes such teaching, just as woke California makes mandatory that its public school wards study critical ethnic studies, climate change falsehoods, and related garbage. Each school day should begin with the Pledge of Allegiance (and “under G-d”), followed by the Star-Spangled Banner. Students whose parents send letters opposing the recitals should be told “Tough Nuggies.” They also should be given homework to define every word in those two recitals and to explain specifically which part they oppose: Ramparts? Proudly hailed? Spangled?

As part of the mandatory right-wing curricula, teachers and textbooks should be mandated to teach core civics subjects including a mastery of the Constitution’s First Amendment and Second Amendment, the principle of “checks and balances,” and the specific roles assigned respectively to each of the three governmental branches: legislative, executive, and judiciary. They should learn how agencies and executive orders work, when appropriate and when improper. They should be taught that America is the most wonderful country that ever has existed since Biblical times, as evidenced by millions from all over the world desperately begging to be allowed in every year. An example of a class civics project can be assigning two teams, one to oppose and one to defend the impeachment of Majorkas. Another project can be all children writing letters to Elon Musk, thanking him for buying Twitter to protect free speech.

Do not doubt that schoolbook publishers will cooperate rapidly in order to make a buck, just as they publish corrupted textbooks aimed for the California and other woke school markets. And do not doubt that ample numbers of teachers will fall into place and gladly teach what they are assigned. They even will volunteer to teach the kids Christmas Carols — which would be quite OK with this Orthodox rabbi.

On abortion, fifteen weeks is very liberal and ample. A pregnant woman who was too tired or overheated to use some easily available contraceptives the night she got impregnated knows by the twelfth week if she is pregnant. That leaves plenty of time for the abortion-on-demand crowd to snuff out the fetus’s life by the end of Week 15. People do not need to await the third trimester for a day that does not conflict with yoga class. For those who look at such laws and respond that “ISIS has taken over Texas” or “DeSantis is Hitler” — good! Wonderful! So stay out, and relocate to Oregon.

Dov Fischer
Follow Their Stories:
View More
Rabbi Dov Fischer, Esq., a high-stakes litigation attorney of more than twenty-five years and an adjunct professor of law of more than fifteen years, is rabbi of Young Israel of Orange County, California. His legal career has included serving as Chief Articles Editor of UCLA Law Review, clerking for the Hon. Danny J. Boggs in the United States Court of Appeals for the Sixth Circuit, and then litigating at three of America’s most prominent law firms: JonesDay, Akin Gump, and Baker & Hostetler. In his rabbinical career, Rabbi Fischer has served several terms on the Executive Committee of the Rabbinical Council of America, is Senior Rabbinic Fellow at the Coalition for Jewish Values, has been Vice President of Zionist Organization of America, and has served on regional boards of the American Jewish Committee, B’nai Brith Hillel, and several others. His writings on contemporary political issues have appeared over the years in the Wall Street Journal, the Los Angeles Times, the Jerusalem Post, National Review, American Greatness, The Weekly Standard, and in Jewish media in American and in Israel. A winner of an American Jurisprudence Award in Professional Legal Ethics, Rabbi Fischer also is the author of two books, including General Sharon’s War Against Time Magazine, which covered the Israeli General’s 1980s landmark libel suit.
Most Popular
Sign Up to receive Our Latest Updates! Register