by Dov Fischer
A grocery store in Athens, Georgia, limits customer purchases of baby formula on May 12, 2022, due to the ongoing shortage. (Shutterstock/The Toidi) 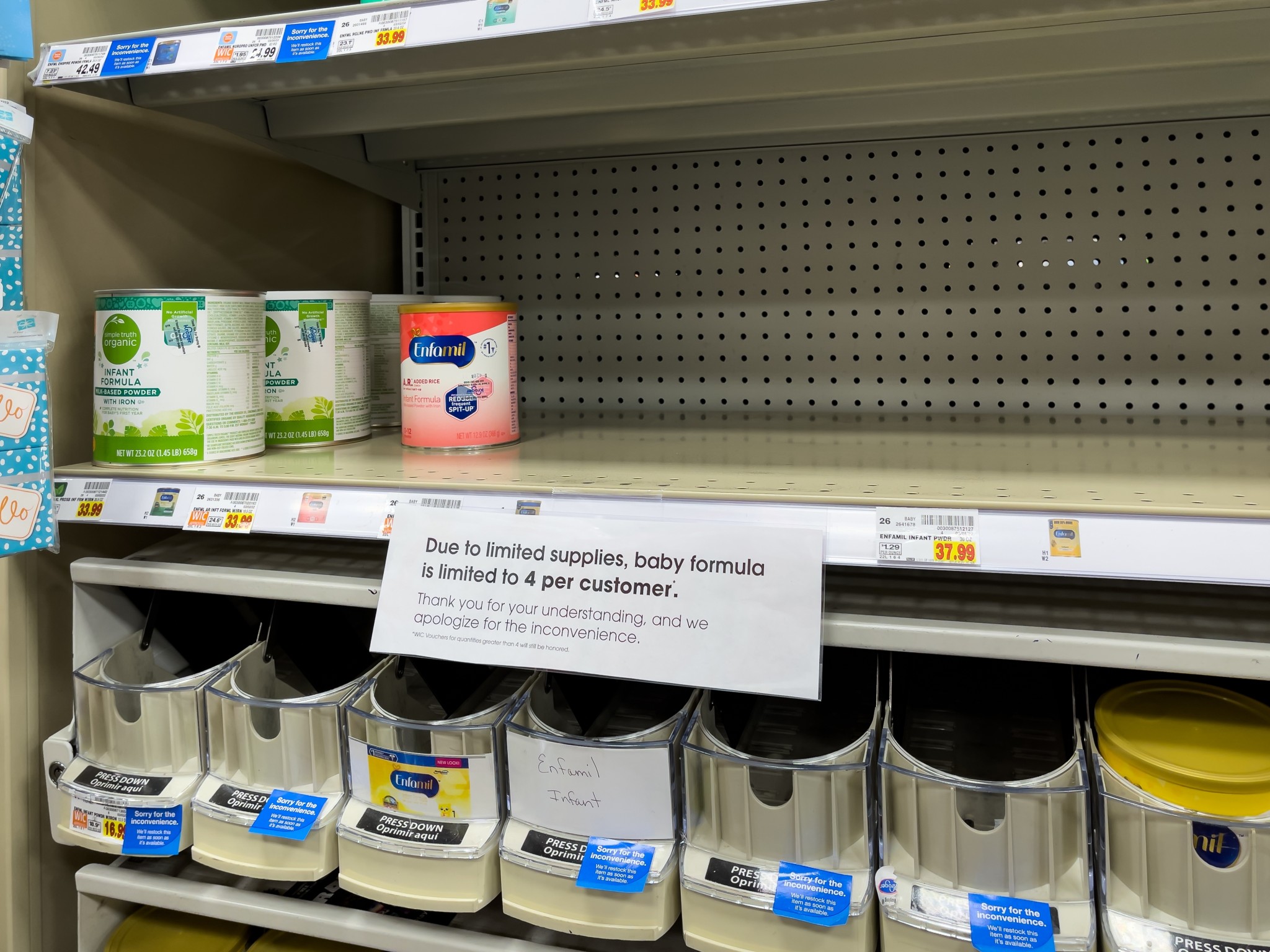 Long, long before the greater American community discovered that Kamala Harris is an idiot and a zero, I published on these very pages that, other than her being Willie Brown’s arm candy with benefits, she was a Nothing. The late Rush Limbaugh, G-d rest his soul, read significant parts of my article on his radio show, assuring its viral spread. But the Left media blacked out any mention of the vapidness of Kamala and her record. Despite media backing, with “reporters” even helping her pick out clothes, her presidential campaign proceeded to implode. You can’t fool all of the people all of the time. But she did end up on Joe Biden’s circus merry-go-round comprised of Black women appointed to important positions, regardless of: (i) mindless incompetence (Kamala as vice president), (ii) anti-Semitism (Karine Jean-Pierre as White House press spokesperson), and (iii) pathetic mediocrity (Ketanji as Supreme Court justice despite a particularly mediocre prior record, marked by repeatedly being reversed — even by Democrat-appointed judges — on appeal).

Conservatives’ challenge — continually — is to break through to the wider audience of politically unaffiliated Americans, the “Independents,” the “soccer moms.” ABC, CBS, NBC, PBS, CNN, MSNBC, the New York Times, and the Washington Post black out conservative voices. So do social media. Therefore, although conservatives sound the alarms, those messages often are consigned to reverberate like trees falling in the middle of a forest. The sound is forceful, but fewer hear it than should.

Thus, most Americans initially believed the lies that Donald Trump was in cahoots with Russia and in conspiracy with Vladimir Putin. They believed the most vicious lies propagated by Obama’s CIA head, James Brennan, himself formerly a Communist Party voter — and who really can know where he stands today? The lies of Obama’s “intelligence” chief, James Clapper. The lies of Christine Perjury Ford. For the longest time, Americans were fed the belief that Michael Avenatti could be a serious contender for the presidency of the United States. They never heard about the Hunter Biden laptop. They simply believed the garbage peddled for them by CNN at airport lounges and on Facebook and Google doctored searches.

Yet, as I wrote in these pages long before others realized it, Biden’s Afghanistan evacuation catastrophe marked a breakthrough. Throughout Biden’s first half-year, the media had been running interference for him. They hid how his multi-trillion-dollar package to print paper money would spiral inflation into the stratosphere. They hid the Democrats’ roles in fostering surging violent crime, the teaching of Critical Race Theory and sexual perversions in the early grades of public school, and the chaos at the Mexican border. But when 13 American military heroes were murdered savagely at Kabul airport, in a shamefully catastrophic scene straight out of Miss Saigon, with impossible-to-hide images of desperate Afghans plunging to their deaths from the skies as they haplessly lost grip on the outer handles of airplanes they clutched, his Afghanistan secret no longer could be concealed, and thus the greater secret emerged:

“Ladies (she/her/hers) and Gentlemen (he/him/his) of America: Your country now is in the stewardship of a boob, a rube, and a stooge.”

The shield was lifted, and even his Left media defensive line no longer would be able to hide his incompetence. As I (me/myself/I) wrote then, Biden’s numbers never again would be positive. So it was written, and so it has been done.

Yet, even as his numbers tanked, the Left media have continued to do their best to hide what they can, to spin what breaks out in public, and to provide whatever cover possible:

4. Chaos at the border? Homeland Security Secretary Alejandro Mayorkas testifies under oath that the border has never been more secure.

5. Afghanistan evacuation? Blame it on the Taliban (they/them/theirs): They swore to us their solemn promises, and they lied.

For everything, Biden has a hidden culprit to blame. After 50 years of being wrong, 50 years of bone-headed mistakes, shameless lies, and his own vile racism in public life, he continues blaming everything on others. No personal responsibility ever is taken. The Left media then race in to protect him. And anyone who still gets through has to contend with his Handshake Ghost and his Easter Bunny.

Yet he could not hide his Afghanistan failure.

And he cannot now hide his Baby Formula Botch.

When a mom goes to the supermarket or grocery or drug store and finds the shelves barren of baby formula, politics is cast aside. Abortion policy does not matter. “Roe” does not matter. “Wade” does not matter. Even “v.” does not matter. That baby (he/him/his, or she/her/hers, but no other pronouns) at home matters. Babies’ digestive systems are not yet sophisticated enough to break down and digest cows’ milk. Juices do not provide all the nutrients they need. They need either mothers’ milk or baby formulas like Reckitt Benckiser’s Enfamil and Abbott Laboratories’ Similac. When a mother has transitioned the baby from breastfeeding to formula in bottles, the mother’s breast milk production dries out. If formula suddenly then becomes unavailable, she does not want to hear about Putin, Big Oil, or Ultra MAGA. She wants baby formula — and she wants it now.

The Left media can hide many things, but they cannot hide from mothers the empty shelves and disappeared supplies. These are the kinds of shortages that Independent voters and soccer moms grasp beyond what they are told by TikTok and YouTube “influencers” and CNN “experts.” They want the formula, and they want it now.

Meanwhile, amid the catastrophe, Biden is sending palettes of emergency baby formula to feed the children of Illegals entering across our southern border. Finally, the apolitical soccer moms and Independents are getting an education into the ramifications of open borders: No baby formula for your children. Crowded hospital emergency rooms when you have a medical emergency. And reduced seats available for your kids at lower-cost state colleges and universities because seats are set aside for the children of Illegals.

The baby formula shortage is Biden’s domestic equivalent of his botched Afghanistan evacuation in that it screams out beyond Biden’s firewalls of ABC, CBS, NBC, PBS, CNN, MSNBC, the New York Times, and the Washington Post. It pierces into American homes and bedrooms and baby cribs. Fathers and mothers have babies. Their parents have grandchildren. Babies have siblings. The baby formula catastrophe hits almost every American and almost every zip code. It is yet another symbol for history books to record how the Biden-Kamala White House was the most unfit, unsuited, incompetent governing administration in American history.

In a sense, many tens of millions of Americans deserve this. It was they who cast votes for these incompetents whose unsuitability and unfitness were demonstrably palpable from the outset. Those mired in the inner cities of Chicago, Milwaukee, Baltimore, St. Louis, Memphis, Philadelphia, New York, Los Angeles, San Francisco, Detroit, and the like — and who then repeatedly elect Democrat mayors and Soros-sponsored DAs — have reduced business crying on TV when their children are murdered by gang violence and stray bullets fired in an environment of no bail, no prosecutions, felonies reduced to misdemeanors, and emptied prisons. Likewise, those who voted for Biden have no business now crying that their babies are undernourished, their gasoline and heating prices are unaffordable, their schools are failing their children, and their entire country is out of whack. All these catastrophes have a common cause: not Putin nor Ultra MAGA nor Big Oil but Biden and Pelosi — and, honestly, the apparitions staring at them in their mirrors, the ones who voted for these villains.

Even so, we all are in this thing together. With the baby formula crisis, occasioned by the government shutting down Abbott Laboratories’ production but failing to act speedily to get the factories back on track, we have another Biden Afghanistan moment that points the way to November. No matter what the Left media say, the doctor’s prescription is clear:

Throw the bums out.