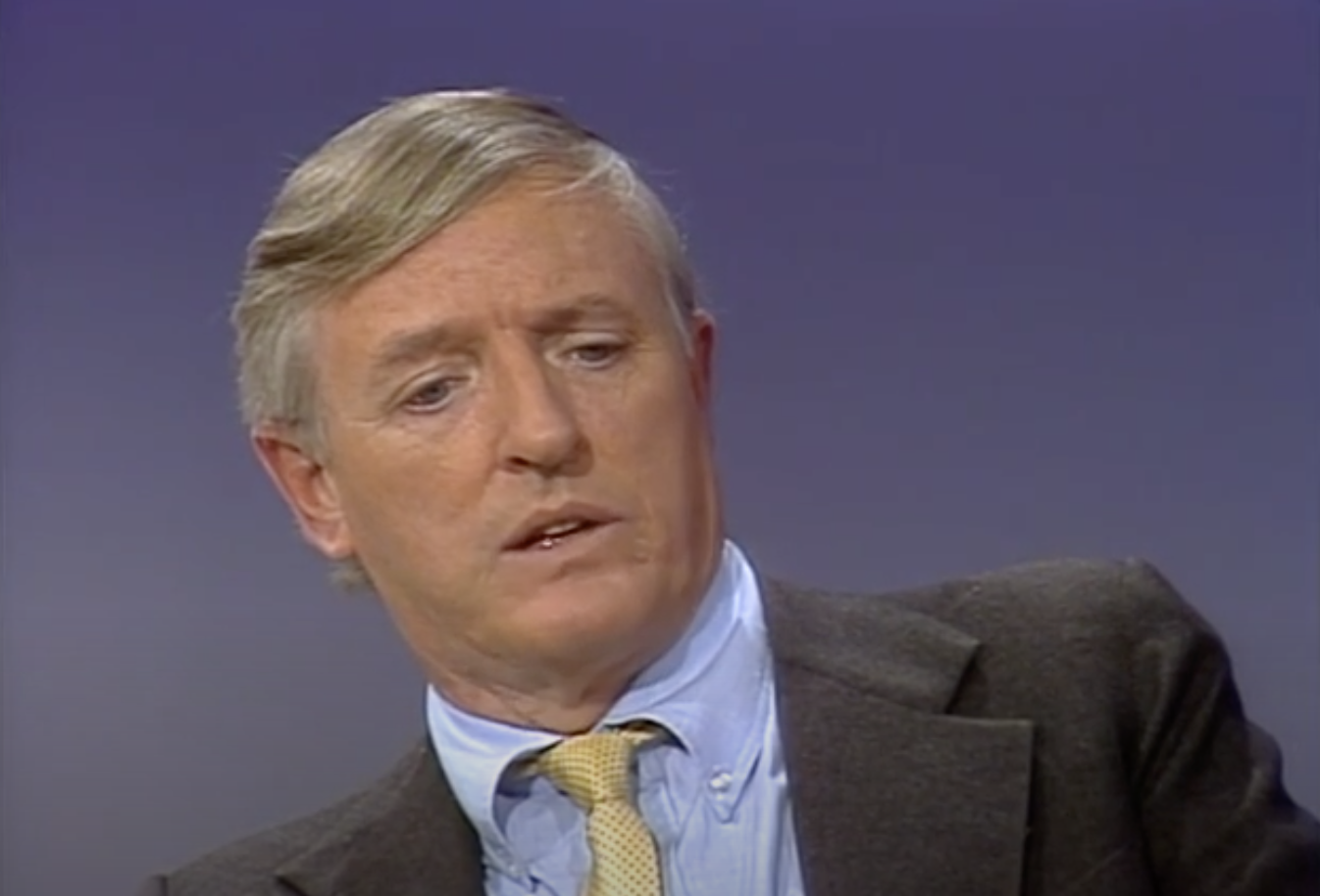 As I, along with Sohrab Ahmari and Michael Anton (and I don’t mind being put in that category), was called out this week in these pages by the venerable Neal B. Freeman of National Review fame, and as Mr. Freeman chose to do so in the form of a self-interview, please allow me to respond in kind.

TAS: Freeman says you’ve attacked his friend and colleague William F. Buckley. He says, quote, “The New Right has turned on Buckley. In just one stack of catch-up reading last week, I saw belittling remarks about him and his ‘standing athwart’ approach from, among others, Michael Anton, Sohrab Ahmari, and Scott McKay.” What say you?

SLM: Well, I’m not sure exactly where Mr. Freeman finds “belittling” remarks about Bill Buckley in my recent writings. If he has read my book The Revivalist Manifesto, which is available at Amazon and is very much worth your time and well-depreciated currency, he might know that I devote an entire chapter to a recitation of the history surrounding Buckley’s stitching-together of the modern conservative movement. It’s quite complimentary.

I will confess that I do not heap unvarnished adulation on WFB; that much is true. I’m a fan, but not a cultist. I find the curtain of pessimism and gloom that pervaded the early conservative movement, as embodied in Buckley’s statement in the initial issue of National Review that conservatism’s project was to “stand athwart history, yelling ‘Stop!,'” to be limiting. He was masterful at winning arguments on public policy, but at the end of the day gloom doesn’t sell as well as you’d hope. And Buckley was, a bit too often, gloomy.

And I will also say that Buckley was missing a piece to conservatism that others added later when it came to flower — which is that no truly successful political movement goes without a popular, or perhaps better said populist, appeal. That was not Bill Buckley’s game. It wasn’t his style, and it wasn’t his strength. Freeman’s bragging that the original National Review crowd was made up either of trust-fund babies or folks with access to rich patrons was not actually a good data point in his arguments, you know. What it meant was that conservatism had its roots among the privileged elite, something the Left has hung around our necks for half a century. It’s funny because the privileged elite are all leftists now, and I’d say the Right is better off for it, particularly considering how Monty Python-esque our privileged elite have become.

Buckley lit the match, for certain, and we are forever indebted to him for it. But it took Ronald Reagan’s positive, optimistic approach, the “shining city on a hill” vision of a conservative society, and Rush Limbaugh’s continuation of that sunny, confident presentation of ordered liberty as our societal salvation, to make conservatism what it is today.

And that isn’t a criticism or a “belittling” of Buckley at all. It’s just a recognition that we can’t be all things to all people, and that’s OK.

TAS: Freeman himself says that Buckley would agree the “standing athwart” statement isn’t good enough today, after all.

SLM: He does indeed. Are we done here?

TAS: Can we get a little more on this?

SLM: Look, I’m not going to criticize Bill Buckley’s approach in the 1950s from the perspective of the 1950s. The man did what he had to do, and, in 1955, you could look at communism’s advance and think the world was going to end. That’s fair. What I’ll say is that, looking back on it from the perspective of 2022, it would have been better if we’d had a bit more Reagan and Limbaugh injected into the movement at the beginning.

I’m not saying that’s anyone’s fault. But as I say in The Revivalist Manifesto, conservatism is an odd movement in that it’s perhaps the only major political affiliation founded by pessimists. And that played a part in its slow-burn development throughout the 1950s, ’60s, and ’70s, when it probably could have taken off a bit sooner. And that matters, you know. There was a big hole in conservatism from Reagan to, say, Newt Gingrich, and look who filled it: the Bushes, who trashed Reagan’s legacy and have so tarnished the conservative brand within the GOP that the average voter doesn’t even know what it means anymore. Maybe a broader-based movement would have been able to generate a viable Republican standard-bearer so that we wouldn’t have been stuck with that horrendous 1988–2016 run of nominees.

TAS: What about Freeman’s characterizations of today’s conservatism as an individual, rather than a collective, pursuit? He says, quote, “The prefixed conservatives have begun to see more benefit in maintaining their independence — cultivating their own particularities — than in subsuming their agenda to coalition priorities. A tax exemption, a decent donor list, an inattentive board — even a tiny splinter faction can provide a few executives with a long, stress-free ride.” Your reaction?

SLM: Well, first of all he’s talking about the K Street set, as I read it. And honestly, other than the fact that a lot of those organizations are pulling down some fat checks from some of the usual suspect donors and one could see that and conclude it means they’re the leaders of the movement, I don’t view those guys as the leaders of the American Right anymore. Nobody is talking about Cato or AEI that I can see. That’s not to minimize the good things those guys do, but that isn’t where the energy is.

There’s this famous Eric Hoffer quote that is so true: “Every great cause begins as a movement, becomes a business, and eventually degenerates into a racket.” Conservatism isn’t immune from that, which is a shame because all of us here believe that ordered liberty, as recognized and espoused by the Founding Fathers of this country, is the greatest political cause of all. But, when you take on the mantle of preserving the Constitution or America as founded, and then you end up writing white papers making “The Conservative Case For X” when X is most certainly not conservative and it’s quite obvious you’re now serving the ends of some woke corporate master rather than the cause you’re supposed to be espousing, it’s a little hard for those of us out in the hinterlands to accept your leadership of the movement for much longer. And as Anton noted last week in a must-read piece at Compact, the Conservative, Inc., crowd has long accepted junior partnership in the ruling elite that Republican and conservative voters have come to very justifiably loathe, particularly in the context of Donald Trump and Jan. 6.

In such a context, independence equals credibility.

He’s talking about factionalism rather than stitching together a coalition and a movement. But when Trump came along in 2016 and did precisely that, with no conservative pedigree and no particular political background, Freeman dumped all over him. Sure, Trump’s style was offensive to the blue-blood gang at the National Review, and so many of them — Jonah Goldberg, David French, Kevin Williamson, et al. — have blown apart their following by persisting in Never-Trumpism. But again, these guys had been shredding the conservative movement’s ability to connect with voters for years. All Trump really did was poll the hell out of the Republican voting base, and when he did so he found a whole raft of issues where the intelligentsia and the people at those think tanks who were the supposed leaders of the movement were completely disconnected. Then he ran on those, and he gave the GOP and the movement a new lease on life.

Nobody at the National Review sparked the Tea Party movement, either, by the way.

TAS: So where’s all this going?

Here’s my take: This is far less a problem than he makes it out to be. I don’t see much of anybody on the right wringing their hands over the pro-life movement’s huge victories this year, for example — other than the D.C. establishment crowd, who very briefly got the vapors over the possibility that it would hurt the chances for the GOP in the midterms. What a cowardly, unworthy perspective that was! And it didn’t last long because a bunch of us screamed “Shaddap” at them and they piped right down. And it turns out we were right.

And so, and if I’m putting words in his mouth I’ll apologize, what it sounds to me is that he’s asking the rest of us who are exploring new ways to define the same basic pursuit, which is ordered liberty as laid down by our Founders, to get in line behind the same old establishment that ran the Reagan revolution into the ground.

Which I would say is 100 percent backwards. What I’d say is that establishment is the one who needs to get in the back seat and let somebody else drive. And the thing is, the New Right isn’t really asking at this point. The 2016 election, and everything that has happened since then on the right, has made it pretty clear that a newer, younger, more aggressive leadership is coming.

And while Bill Buckley is and will remain an icon of the movement, he himself would likely be supportive of the new blood and an updated approach. It’s a bit perplexing that those so jealously defending his legacy are not.