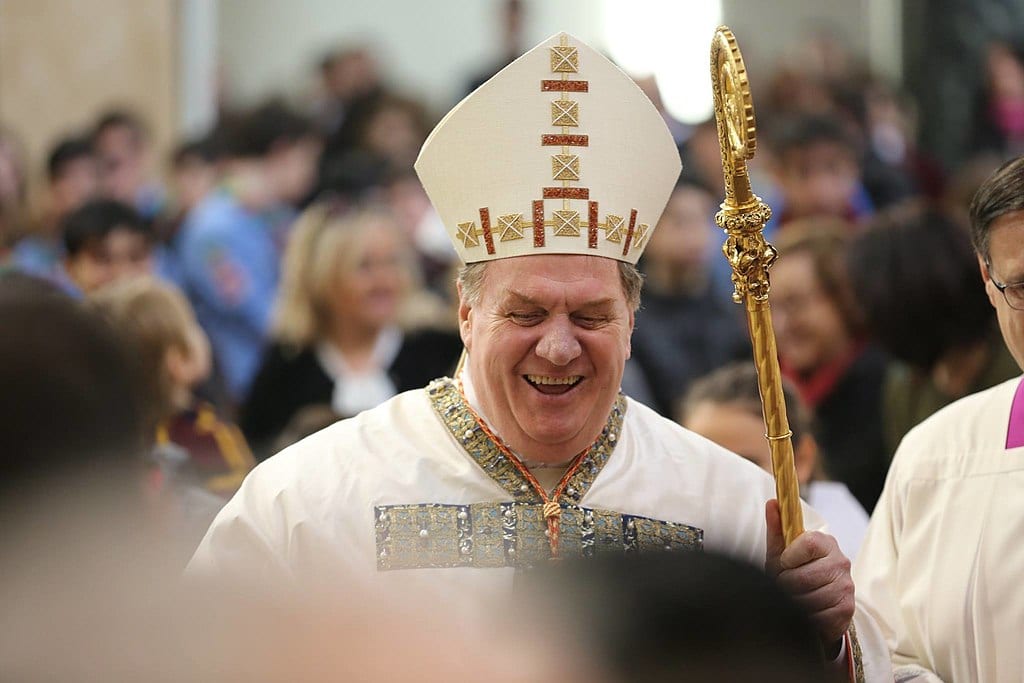 In late September, I started getting calls from concerned Catholics in Newark, New Jersey that Cardinal Joseph Tobin “had an Italian actor living at his cathedral basilica rectory.” The callers identified the actor as Francesco Castiglione. They said that Castiglione has been taking English and voice classes at Seton Hall University, and suggested that he is the real recipient of Tobin’s infamous accidental tweet from earlier this year. (“Nighty, Night baby, I love you,” Tobin wrote to someone whom he claimed later was one of his sisters; the sister has never published proof of receiving the tweet.)

I then called up the inaptly named Jim Goodness, Tobin’s spokesman. I asked him point-blank: Is Castiglione living with Tobin at the rectory? “I am not going to entertain the question,” replied Goodness. Shortly after my tweet on October 5 — Castiglione’s Facebook page tellingly contained no posts from October 5-12 as far as I can tell — I got a call from a well-placed source in Newark. “Francesco is gone. He left the rectory,” my source informed me. I then called up Goodness again to verify this report. Goodness said he wouldn’t address the matter and hung up on me.

A second reliable source called to reiterate that “Castiglione took off” and that Tobin was conducting a leaks investigation designed to ferret out any priests who might have talked to me.

What did it all mean? Was Tobin discarding baggage in anticipation of his possible appointment to replace Cardinal Donald Wuerl in Washington, D.C.? Possibly. He is, after all, on the short list to succeed Wuerl. (He made the Wall Street Journal’s list of three.)

“Tobin is under serious, serious consideration,” a source close to Wuerl’s chancery informed me on October 25. The D.C. chancery is “preparing for him,” according to this source. Asked to give a percentage on the likelihood of a Tobin appointment, this source replied, “75-80 percent.” Indeed, this source had texted me without any qualifiers (before I followed up with a call): “Tobin takes DC in three weeks… Next [archbishop] of DC from Newark like Uncle Ted.”

Under any other pontificate, Tobin would be the last cardinal tapped for Washington, given his scandalous ties to the pedo-rapist Theodore McCarrick. Tobin has acknowledged that he knew about McCarrick’s settlements in New Jersey with churchmen whom he tried to force into his bed. But Pope Francis is nothing if not reckless and indifferent to the flaws of flaky and depraved cardinals inside his inner circle.

Francis loves Tobin above all for his left-wing politics and itches to place a Trump nemesis in D.C. That’s why Santa Fe Archbishop John Wester, an open critic of Trump, has also been under consideration to replace Wuerl, though he appears to have dropped off the list. I have been told by sources in Rome that the Vatican took Hillary’s defeat hard and continues to fulminate over the Trump presidency. Francis’s repeated jabs at “nationalism” are thinly veiled attacks on Trump’s MAGA agenda.

Recall that after Tobin sparred with Mike Pence, then governor of Indiana, over illegal immigration, Pope Francis plucked him from the ecclesiastical obscurity of Indianapolis and made him the cardinal of the populous archdiocese of Newark, New Jersey, which Cardinal Dolan is said to have taken as a severe slight. (The Tobin promotion was also a shot at Philadelphia Archbishop Charles Chaput, whose occasional conservative statements irk Francis; Wuerl, heretofore Francis’s chief bishop-maker in America, also dislikes Chaput and has blocked him from getting a red hat.)

Under the indulgent patronage of Pope Francis, Tobin has let it all hang out, slamming Trump by day, fraternizing with Castiglione and other simpatico company by night. Tobin spent many years in Rome working at the Curia, where he is assumed to have met the Italian soap actor.

Tobin’s time in Rome was marked by a successful campaign to run interference for left-wing nuns, such as Sister Carol Keehan (dubbed “Sister Obamacare” for her seven-figure-a-year lobbying work to promote government-run health care) in America. Pope Benedict XVI had launched an investigation of socialist and modernist nunneries in America, but Pope Francis, taking advice from Tobin among others, quickly scuttled the probe after his election. (To get Tobin out of his hair, Benedict sent him to Indianapolis.)

All of this makes Tobin the ideal archbishop for Washington, D.C. in Bergoglio’s eyes, for whom “social justice,” meaning the socialism, amnesty, and extreme environmentalism of the global left, trumps all, even the obvious consideration that making a corrupt McCarrick crony head of the Church in the nation’s capital is sure to demoralize priests and inflame the lay faithful.

Can a Tobin appointment be stopped through a preemptive backlash (various petitions against Tobin are underway)? My aforementioned source was pessimistic, but he thought such efforts worth a shot.

Then again, Pope Francis harbors a notorious hatred for Americans (a Catholic philanthropist who has given the Vatican gobs of money told me that even he felt that Francis “hated” him for his national origin). Given Bergoglio’s anti-American prejudice (even the liberal-leaning religion reporter John Allen has acknowledged it, noting the paucity of Americans working in Francis’s Curia), and given his contempt for “rigid” lay Catholics in the U.S., Bergoglio may enjoy nothing more than giving them a lefty whom they will hate.