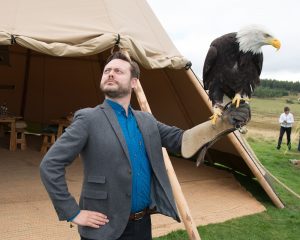 Kevin Kosar: Congrats on the publication of Drinks: A User’s Guide (Tarcher, 2016). It’s a smart-looking book, and I enjoyed it. So how’s the weather in Minnesota?

Adam McDowell: It’s lovely, there are Canadian flags everywhere, people being very polite to each other.

McDowell: I’ve never had a doctor’s bill in my life. That’s explanation enough.

Kosar: As a Canadian, I trust you consume barbarous quantities of drinks like Yukon Jack, Canadian Club, Molson, and Moosehead, right?

McDowell: Ha! Yes, and Fireball, which few people realize is a Canadian product, which we’re proud of. Just like we’re proud of Justin Bieber. In all seriousness, I think Canadian drinking habits are different from U.S. ones. By and large, we drink less.… As much as there’s this image of Canadians as these macho drinkers, it’s actually a pretty moderate country in that way.

Kosar: Any bitters drinking going on up there?

McDowell: Oh, yes. You do get Bitters and ESB. The word bitter is thought by marketers to be a no-go. But it is here…. There’s a little bit more market for British porter, mild beer, that kind of thing. But it’s a small difference. Generally speaking, if you’re from the U.S. and you come to Canada, and you go shopping for beer, you’re going to have a similar experience.

Kosar: Is anyone making good wine up there?

McDowell: Yeah. It’s a shame the world doesn’t get to try it. There’s some good wines coming out of British Columbia, and especially out of Ontario — in Niagara and Prince Edward County. They’re cool climate wines, obviously. We do good Riesling, good Pinot Noir. I think a lot of Canadians don’t necessarily appreciate what’s happening. Unfortunately, I gather, I don’t think many outside Canada get to try very much of it at all. Most of the wine imported from Canada is ice wine, which is a dessert thing. I personally cannot stand the stuff.

Kosar: Have wine coolers, which have recently reappeared in the U.S., started popping up in Canada?

McDowell: I don’t know… I don’t hang around with a lot of 16 year olds. One of the interesting developments here lately is there’s a company called Georgian Bay in Ontario that’s doing really good gin smash in a can.

Kosar: I’m glad to hear that you’re not hanging around a bunch of 16 years old. I’d have to cut this interview off. I assume there are laws against that sort of thing up there?

McDowell: Yeah, the age of consent is actually age 18.

Kosar: If you had to choose, would you go with beer, spirits or wine?

McDowell: What’s the scenario? Are we talking like Gilligan’s Island, like I can never have anything else again? Or is just like what would I want for my next drink?

Kosar: If you had to pass into an afterworld where only one sort of beverage would be served for all time?

McDowell: I’d probably go with beer…. It’s food friendly, it’s relatively low in alcohol. Beer is great. Let’s take a moment to celebrate how great beer is. If I could have everything from an imperial porter one day, or a quadruple Belgian stout to a pretty light pilsner the next day, et cetera. If I could have a whole spectrum and range of beer, that’s not a terrible eternal fate, I think. I would miss wine and spirits.

Kosar: Bringing it back to the book, why did you write Drinks: A User’s Guide?

McDowell: It came out of certain things that happened at my house, which was people coming over… the 20 to 40 something demographic of urban dwelling, otherwise educated people, who really did not know anything about drinks, honestly, and were afraid to ask…. The short answer to all of this is I wanted a book…. A thinking persons guide to drink that was a little more on information and story and background, maybe a bit less on pretty pictures with the recipe, that you’re probably not going to have the ingredients to make.

Kosar: The book has a rather jaundiced chapter on vodka. Do you ever drink it?

McDowell: No. I say it’s very boring. I think for a lot of novice drinkers, vodka is an easy option, in the sense that it doesn’t taste like much. It’s not terribly challenging. It’s the equivalent of jeans, it goes with almost anything, so it’s very easy to keep pulling it out of the closet over and over again. Rather than venturing off into a new experience. I also have a little bit of resentment against vodka, because it seemed to have for a long time taken over for gin and the martinis…. The Martini is a gin cocktail. No question about that.

Kosar: Is it possible there was a little bit of self-hatred going on since so much of the Canadian whiskey tastes like vodka?

McDowell: Them’s fighting words. You’re gonna have to fight a whole new the War of 1812. This is interesting talking about Canadian whiskey. Unfortunately, I admit, we err in a sense that… well, it is like music. Canadian music is great, except what we export. So you might know all the Justin Bieber and Celine Dion, and we keep the world’s best for ourselves. It was that way for a long time with Canadian whiskey…. Get your hands on some Wiser’s Legacy and your eyes will open wide.

Kosar: You advocate using orange bitters in a martini. Explain yourself.

McDowell: That goes way back. That was part of the recipe in a lot of different places. I don’t have my library in front of me, but off the top of my head, I’m gonna say things like the Savoy Cocktail book in 1931. I think what happened was Prohibition happened. People stopped making orange bitters because they didn’t have any application in day to day life…. So people forgot about the minor ingredients, and they started making martinis without them. That happened for decades and decades and decades. Orange bitters is back, so why not put them back in the martini?

Kosar: I like the word “ad-hoctail.” Is that something you invented?

McDowell: Yeah. I went to a party, quite spontaneously invited by a friend of mine, and I had white rum for some reason. Maybe I had at my desk at the office. And I went to a convenience store and I bought some mixers to go with it. I was like, “Rum’s good with citrus, so I’ll have some Lime Crush,” which I’m not sure is a product in the United States. Have you tried Orange crush?

McDowell: So they’ve got Lime Crush, and this sort of lemonade, like San Pellegrino lemonade, and I mix it together, and my friend says, “That smells like an airport daiquiri.”

McDowell:The idea behind the ad hoctail is if you have to make a crappy mixed drink out of some spirits and mixer that you happen to end up, give it a fun name, and it seems like you’re doing something clever.

Kosar: I think the first mixed drink I ever made was an ad-hoctail. It was right before a late teen spring break trip to Daytona Beach, and I combined Canadian Club and Sprite. I mixed them like 50/50 in the two liter of Sprite.

McDowell: Whoa. That is almost like a Seven and Seven.

Kosar: Yeah. That was my inspiration, because that evil drink—the Seven and Seven—was well known in Ohio.

Kosar: Do you not have 7Up there?

Kosar: I blame Canada! You people. That was nefarious.

McDowell: I love that our countries are pointing fingers at each other over mixed drinks.

Kosar: You started it. Anyway, your book is loaded with great tips … and correctives to common mistakes. If you had to point to three pieces of advice for drinkers, what would they be?

McDowell: First, drinking is supposed to be fun. Do not use your drink knowledge, no matter how hard won, and be cordial, don’t be a bore. Number two, there’s no such thing as a man drink and a woman drink, period. Forget all that, it’s nonsense. Number three—ask advice if you don’t know something. You obviously get to learn things by trying them. So ask advice…. Be honest about what you know and you don’t know. That is true wisdom, and only that can be learned. There is no sense pretending that you know everything. I’ve been writing about drinks for 11 and a half years now, and the more I learn, the more I realize I don’t know. There are all these worlds to explore. If that’s true with me, that’s true with everybody. Just be humble about your knowledge or lack thereof.