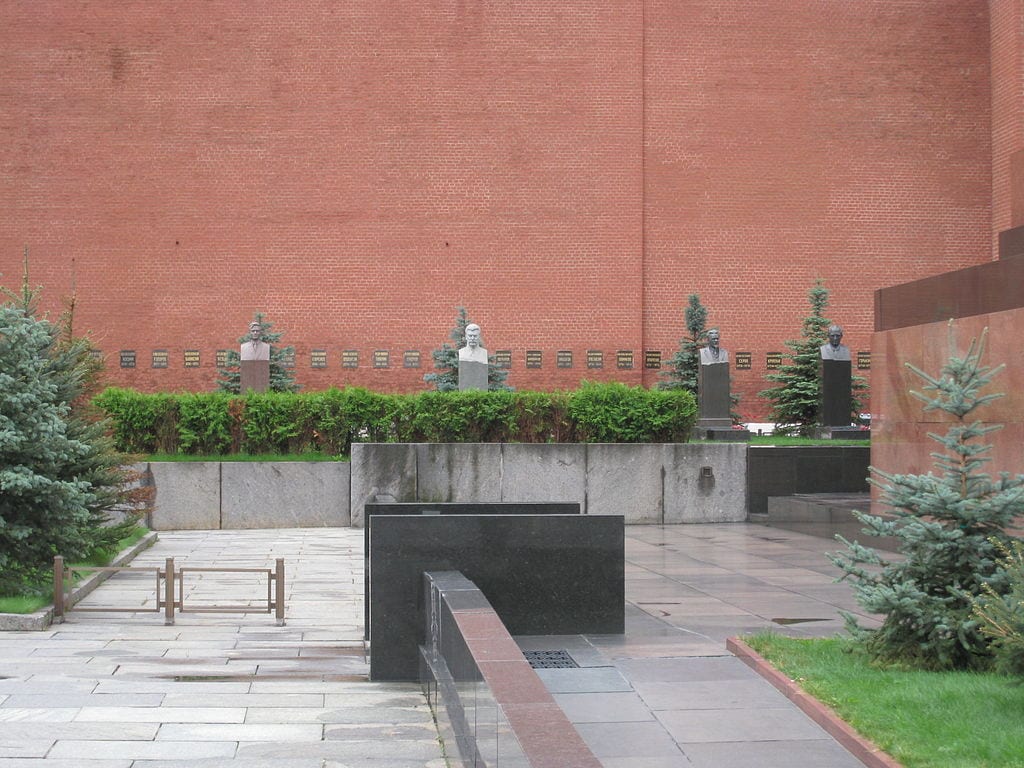 On November 1, 1961, Lenin’s tomb disgorged Joseph Vissarionovich Stalin’s embalmed remains. After his death in March 1953, Stalin’s body was displayed next to that of Bolshevik founder Vladimir Ilych Lenin.

Stalin’s death, perhaps a murder orchestrated by secret policy head Lavrentiy Beria, ended a reign marked by promiscuous and arbitrary mass murder. Stalin’s chief lieutenants, all implicated in his manifold crimes, sang his praises post-mortem. Many Soviet citizens, on the receiving end of decades of propaganda as part of an all-encompassing personality cult, were genuinely disconsolate, even hysterical.

Five days after his death from a cerebral hemorrhage or poison, his coffin was carried into the small building adjacent the Kremlin holding Lenin’s carefully preserved body. Speaking on the occasion were Beria, who carried out Stalin’s executions; Vyacheslav Molotov, the foreign minister who negotiated the infamous Hitler–Stalin pact; and Georgy Malenkov, Stalin’s henchman, who initially succeeded the dead Red Czar. In November, after careful preparation of his body, Stalin was placed next to Lenin.

It was a singular honor for a man who competes with Mao Zedong for the title of bloodiest dictator in human history. (As architect of the Holocaust and initiator of World War II, Adolf Hitler stands alone, but the other two directly killed more people, especially their own.)

To his credit, Nikita Khrushchev, almost a liberal at that time within the Soviet Union, began a tortured process known as “destalinization.” In February 1956, he made the famous “Secret Speech,” entitled “On the Personality Cult and Its Consequences,” to the 20th Communist Party Congress, which denounced Stalin’s crimes. The text soon circulated, causing an uproar among party faithful worldwide while creating hope for an easing of the Cold War.

Left unexplored was the responsibility of those, like Khrushchev, who had served the infamous “Man of Steel,” the meaning of the surname adopted by Stalin as a revolutionary in 1912. (His birth name was Dzhugashvili.) Stalin mixed guile and finesse with brutality and treachery as he gradually eliminated all his rivals after Lenin’s death in 1924. Every step of the way he was aided by the ambitious, foolish, and fearful.

No one man, no matter how competent, determined, and powerful, can wreak such havoc alone. With the support of military chief Georgy Zhukov, Khrushchev defeated his rivals to lead the USSR. The dangerous, blood-soaked Beria was eliminated. But not Malenkov, Molotov, and the others. After failing to oust Khrushchev, they expected a trip to the gulag, if not death, but he merely “retired” them, a dramatic change from the era of deadly choreographed show trials initiated by Stalin. Domestic repression eased. One result was the publication of Solzhenitsyn’s One Day in the Life of Ivan Denisovich. Still, Khrushchev could be ruthless: a few months after the Secret Speech he OKed using the Red Army to crush the Hungarian Revolution.

Khrushchev steadily eliminated Stalin’s name, which had been strewn promiscuously about on buildings, landmarks, and even cities. The Stalinist era officially ended on November 1, 1961. At the 22nd Party Congress that October, Khrushchev announced the reburial of Stalin, then still on public display. In a choreographed speech, an 80-year-old Bolshevik and famed disciple of Lenin, Dora Abramovna Lazurkina, opined that “Comrades, I could survive the most difficult moments only because I carried Lenin in my heart, and always consulted him on what to do. Yesterday I consulted him. He was standing there before me as if he were alive, and he said: ‘It is unpleasant to be next to Stalin, who did so much harm to the party.’ ”

Yes, he had damaged the party. And a lot more, like carrying out mass murder and imprisonment. But never mind; the symbolism remained dramatic. Khrushchev followed with a decree ordering the removal of Stalin’s corpse, which was reburied in front of the Kremlin wall, with a modest granite marker that announced “J. V. Stalin 1879–1953.” (A small bust was added in 1970.) Khrushchev explained, “The further retention there of the sarcophagus with the bier of Stalin shall be recognized as inappropriate, due to the serious violations by Stalin of Lenin’s precepts, abuse of power, [and] mass repressions against honorable Soviet people.” Stalin’s new resting place was encased in cement to hinder renewed veneration.

A few years later, Khrushchev was ousted by his protégé, Leonid Brezhnev, who proved to be the perfect apparatchik: decrepit, cautious, unimaginative, dull, and stultifying. Soviet society again closed as dissent was forbidden. Dissidents were punished. The Czech Prague Spring was suppressed. Solzhenitsyn was expelled from the USSR. But Brezhnev was no Stalin. The Red Army did not roll westward, and détente eased superpower tensions. Nor was there any revival of domestic Stalinism. The new Communist Party leader did not have the backbone of a mass murderer. Khrushchev lived out his life in comfortable retirement.

By the 1980s, the system broke down. When Mikhail Gorbachev took over in 1985 after Brezhnev’s two enfeebled, short-lived successors, the new leader’s efforts to reform the system only sped its demise. Thirty years ago the Berlin Wall fell. On Christmas Day 1991, the Soviet flag was lowered from the Kremlin for the last time. The Evil Empire, as President Ronald Reagan termed it, dissolved.

Yet Stalin remains buried in a place of honor. And not just him. Many communist unworthies remain alongside him in the Kremlin Wall Necropolis, a protected landmark since 1974. Lenin’s tomb — the first one was constructed of wood in 1924, followed by today’s granite structure, which was completed in 1930 — is the most dramatic burial place in Red Square. (The Bolshevik leader said he wanted to be buried next to his mother, and his widow, Nadezhda Krupskaya, opposed preservation of his body, but personal preferences did not matter in the new workers’ paradise.) He was not the first to be interred there, however. In November 1917, the Bolsheviks buried 240 dead from the October Revolution in Red Square. Notable people also were buried there: revolutionary leader Yakov Sverdlov and American journalist John Reed, for instance.

The practice of mass burials continued for only a few years, though rank retained its privileges in the classless society: Sverdlov and two other Communist Party leaders, Bolshevik leader and Red Army commander Mikhail Frunze and Secret Police Chief Felix Dzerzhinsky, a Pole by birth, were buried individually in front of the wall before the practice was stopped in 1926. Next came the interment of ashes in the Kremlin wall. Since the Orthodox Church forbade cremation, the practice was viewed as an affirmation of atheism. Occasional burials resumed in 1946, however, starting with Mikhail Kalinin, who had served as head of state. Most interments continued in the wall; occasionally cosmonauts and generals muscled their way into the atheistically sacred ground.

The last such honored burial occurred in 1984, that of Defense Minister Dmitry Ustinov. He demonstrates the fickleness of fame. He was a bureaucrat in a collapsing system whose 15 minutes of fame is long past. Yet he continues to occupy valuable real estate in one of the world’s most recognizable and symbolic locations.

While there is an understandable reluctance to disturb the dead, Russians today have good reason to initiate a process of Red Square “cleansing.” It would make sense to begin with Stalin, who deserves the treatment accorded the body of Oliver Cromwell after the restoration of the British monarchy. Indeed, there has been some discussion about sending his body back to the now independent country of Georgia, where he was born — and almost half the population expresses its admiration for him — but so far he remains unmoved.

The residents of the other 11 individual graves also deserve disinterment. They were discreditable brutes, though some were more monstrous than others. In addition to Stalin are Sverdlov, Frunze, Dzerzhinsky, and Kalinin, mentioned earlier. Then came Andrei Zhdanov, chief propagandist who once was viewed as a potential successor to Stalin. Next came Stalin, followed by Kliment Voroshilov and Semyon Budyonny, both Bolshevik politicians and military commanders. Last to be buried were Leonid Brezhnev, Mikhail Suslov, Yuri Andropov, and Konstantin Chernenko; the first, third, and fourth were party general secretaries, while the second was the party’s unofficial chief ideologist.

The wall, too, should be cleared. Doing so should be easy, since removing urns filled with ash is a relatively uncomplicated process. Among those who should be thus disposed of include Leonid Krasin, Sergei Kirov, Vyacheslav Menzhinsky, Sergey Kamenev, Alexei Kosygin, and Ustinov. Kirov, the influential party leader of Leningrad, was notable as a friend of Stalin whose assassination, some believe on the orders of a paranoid Stalin, was the excuse for the great purge. Menzhinsky chaired the secret police. Kosygin originally shared leadership with Brezhnev before losing the ensuing power struggle. As noted earlier, a few non-politicians (though none who are nonpolitical, since nothing in the USSR was nonpolitical) reside in the Kremlin’s walls, such as Georgy Zhukov, the great World War II army commander; Anatoly Serov, a noted fighter pilot; and Maxim Gorky, writer and Nobel Prize in Literature nominee.

The U.S. remembers and commemorates plenty of discreditable and unattractive figures who are historically significant. But few played such a malign role as serving the Soviet Union as it crushed its own people and spread murderous repression abroad.

Of course, the ultimate target should be Lenin. After communism collapsed, there was serious discussion about closing the tomb. The first democratically elected president of Russia, Boris Yeltsin, removed the honor guard from the mausoleum and urged Lenin’s burial. Although a majority of the public appears to back holding a funeral for the top Bolshevik, nationalist impulses have blocked the move. Proposals to close the entire commie necropolis have met with less favor.

Communism no longer governs Russia, authoritarian though today’s ruling regime is. But the ideology lives on, symbolically, at least, as a gaggle of misanthropes, creeps, thugs, and murderers remain interred in historic Red Square and the Kremlin’s walls. It is far past time to rebury the bodies and ashes elsewhere. Then the space created could commemorate the multitude of victims and legion of true Russian heroes. Surely there are a long list of people far more worthy to reside in death in the Kremlin Wall Necropolis than the likes of Ustinov, Andropov, Brezhnev, Dzerzhinsky, Stalin, and Lenin.

Doug Bandow is a Senior Fellow at the Cato Institute and former Special Assistant to President Ronald Reagan. He is the author of Foreign Follies: America’s New Global Empire.