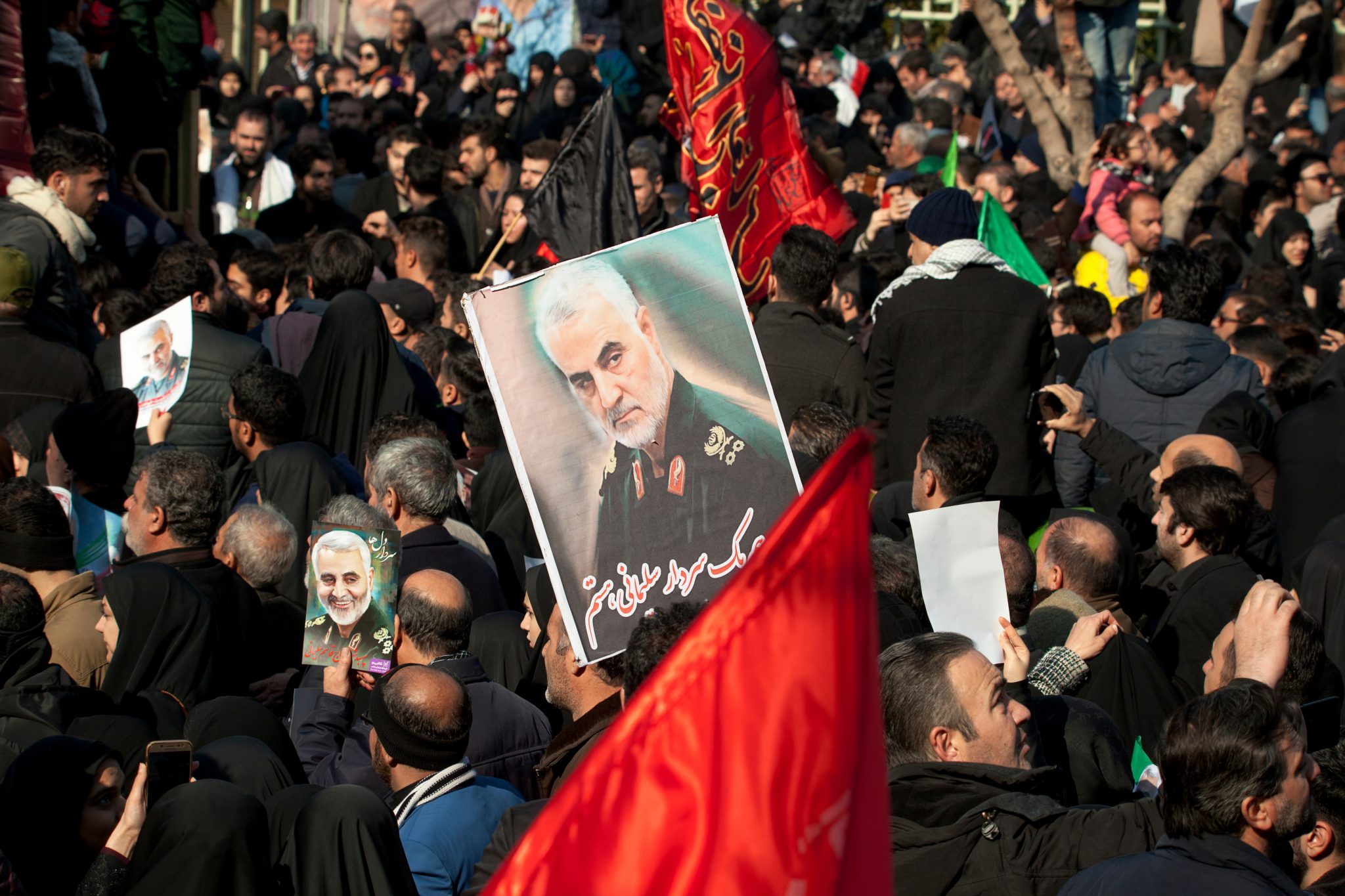 Yesterday, January 3, passed rather quietly, which was not at all as advertised. It was the first anniversary of the U.S. drone strike that killed Iran’s chief terrorist, Gen. Qassem Soleimani, at the Baghdad International Airport. Judging by the rather small terrorist attacks and the bellicose rhetoric coming out of Tehran over the past week it seemed as though the ayatollahs were planning something big for January 3.

When Soleimani was killed, he was in Baghdad meeting with leaders of some of the Iran-backed militias operating in Iraq. At least two of them were among the seven people killed with Soleimani. When the drone strike occurred, many Democrats — including Joe Biden — condemned the strike. The media immediately proclaimed that Trump had launched us into an open war with Iran. But he hadn’t.

The reason why that war didn’t happen is much the same as the reason that the first anniversary of Soleimani’s death didn’t mark the beginning of such a war. Iran, for all its bellicosity, is smart enough to wait out Trump so that it can enjoy the promise of what president-elect Joe Biden will deliver for it.

Soleimani was the commander of the Iranian Revolutionary Guard Corps from 1988 until his death in 2020. The IRGC reports directly to the ayatollahs. He directed dozens of terror attacks around the world, some of which took American lives. The IRGC, under Soleimani, manufactured the “explosively-formed penetrator” devices that killed hundreds of U.S. troops in Iraq.

The killing of Soleimani shocked the ayatollahs more than any event since their kakistocracy came to power in 1979. It was the first time one of the regime’s innermost circle was killed for his crimes and the threat he posed to us and the civilized world. It proved to the world — and the Iranian people — that the regime was vulnerable.

Trump has a mostly admirable record in responding to Iran’s aggression. Soleimani was a legitimate military target and his death made Americans safer. An Iranian rocket attack against two U.S. air bases in Iraq caused several U.S. casualties, but no one was killed. Trump didn’t respond. When Iran shot down one of our drones in June 2019, Trump first ordered and then canceled a U.S. counterattack on Iran when he was told that more than one hundred Iranians would be killed. Non-lethal attacks should usually be responded to in like manner if at all.

The latest round began with a pre-Christmas rocket attack by one of those Iranian-backed militias on the U.S. embassy in Baghdad. No one was killed. President Trump’s response seemed mild by comparison. He tweeted a warning to Iran that if one American were killed, it would be held accountable, writing that the Iranians should think about that.

Iran built up a frenzy of bellicose rhetoric before yesterday.

On Wednesday Iran’s President Rouhani threatened President Trump’s life, saying, “In a few days, the life of this criminal will end and he will go to the dustbin of history.” Other Iranian officials issued similar threats against Trump and anyone else involved in the Soleimani drone strike. Those threats remain and have to be taken seriously.

Rouhani’s speech revealed also why Iran hasn’t started the war or conducted the terrorist strikes it is threatening. He added, “We are very happy about [the end of Trump’s presidency] and we believe that the period after Trump will be a better condition for regional and global stability.”

Iran is very scared of Trump and not at all scared of president-elect Joe Biden. Trump has devastated Iran’s economy with economic sanctions and sanctions against Iranian bigwigs. Biden’s promise to rejoin the 2015 Obama nuclear weapons deal with the ayatollahs means he will reverse Trump’s “maximum pressure” economic sanctions campaign against Iran and thus enable its shattered economy to revive quickly.

The Saudi Arabian and Israeli governments reportedly were pressuring Trump to strike against Iranian nuclear facilities before he leaves office. He reportedly debated doing so with his staff. But Trump didn’t — and won’t —because he doesn’t want to be responsible for starting a big war in the Middle East, which would certainly be the result.

It was sufficient, for Trump, to demonstrate the possible consequences to Iran by having two U.S. submarines sail through the Persian Gulf and nuclear-capable B-52s fly near Iran. But the USS Nimitz carrier battle group was suddenly withdrawn from the area, indicating that a strike on Iran wasn’t imminent.

President-elect Joe Biden has said he wants to bring Iran back into compliance with the 2015 Obama nuclear weapons deal. It is impossible for him to do so for many reasons I have written about before, with one addition.

Last week, Tehran announced that it was proceeding to enrich uranium to the 20% level. That requires a great deal of time and effort. Unfortunately, that level of enrichment requires comparatively little more effort for Iran to enrich uranium from 20% to the 80-90% purity required to manufacture nuclear weapons.

Ever since George H.W. Bush was in office, every U.S. president has said that Iran will not be allowed to obtain nuclear weapons. The time to prevent them from doing so has about run out.

Biden’s coming action to relieve Iran of economic sanctions will please France, Germany, Russia, and the UK, all of which have tried to keep the 2015 Obama deal alive. But Iran’s announced intention to enrich uranium to 20% will frighten Saudi Arabia and Israel. And it should because, despite its constant claim that it won’t develop nuclear weapons, Iran has been working hard to do so since about 1981.

North Korea has nuclear weapons and very friendly relations with Iran. There is a train that runs between Pyongyang and Tehran. Have the Iranians already bought nuclear weapons from the Kim regime?

When then-president Obama gave his infamous Cairo speech in 2009, he said, “No single nation should pick and choose which nations hold nuclear weapons. That is why I strongly reaffirmed America’s commitment to seek a world in which no nations hold nuclear weapons.” Apparently Russia, China, India, North Korea, the UK, and France didn’t agree to give up their nukes because Obama wanted them to. (Neither did we.)

Obama did nothing to stop Iran’s march to nuclear weapons. His 2015 deal with Iran actually paved the way for it. The deal was extremely dangerous because it failed to include an effective means of verifying Iran’s compliance.

Biden, like Obama, may believe we don’t have the right — or the obligation — to stop Iran from obtaining nuclear weapons. By rejoining that Obama deal, reviving Iran’s economy and enabling it to press forward to develop nuclear weapons, Biden will hasten a nuclear arms race in the Middle East. Israel has nuclear weapons but won’t admit it does. The Saudis will to develop or buy their own. To what level will Iran’s nuclear threat have to rise before either or both of those nations try to destroy Iran’s nuclear capability?

Other Middle Eastern nations such as Kuwait, Oman, and the UAE look to us for protection against Iran’s threat. What will they do when that protection is manifestly absent?

Biden’s adamantine weakness on Iran comes at a critical juncture in history. It reflects what he learned as Obama’s vice president, which is to say nothing that reflects reality.