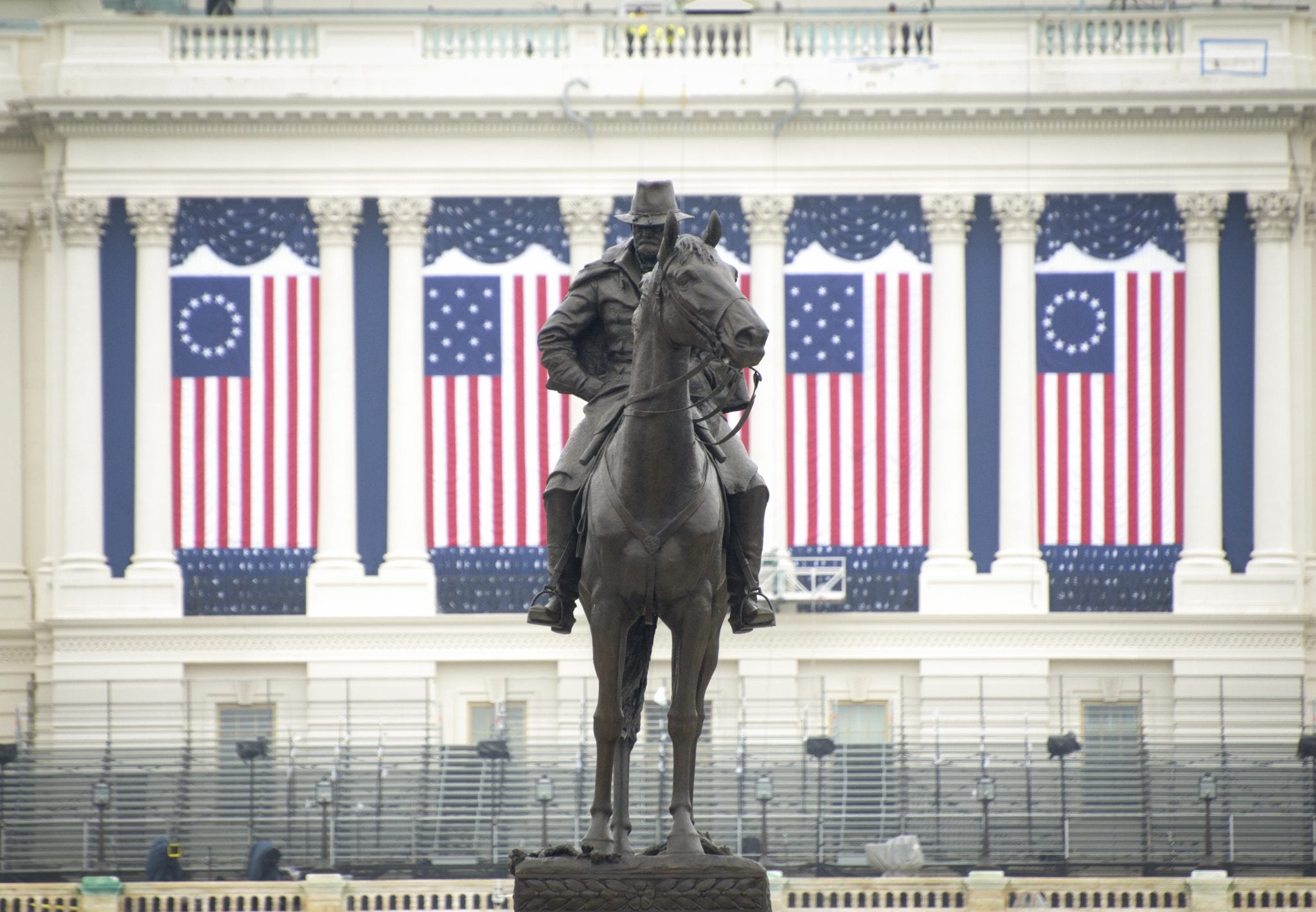 Two years after the Civil War ended in 1865, a Republican Congress gained a veto-proof majority in both chambers. They almost immediately began trimming the powers of the executive and judicial branches. First, they replaced President Andrew Johnson’s Reconstruction plan with their own. In order to restrict his ability to interfere, they passed a number of bills over his veto. Although targeted at Johnson, the acts also weakened future presidents. Second, they defied the Supreme Court and manipulated its membership in order to limit judicial intervention with congressional Reconstruction.

From December 1863 to April 1865, Reconstruction proceeded under President Lincoln’s guidance. After he died, President Johnson attempted to follow in Lincoln’s footsteps. Neither Lincoln nor Johnson required that the former Confederate states adopt black suffrage. While both had hoped that blacks who were “highly intelligent” or Union veterans might be enfranchised, none were. Nonetheless, on the day he died Lincoln said, “We cannot undertake to run state governments in all the Southern states. Their people must do that — though at first I reckon some of them may at first do it badly.”

Although some historians assume that the congressional Reconstruction that began in March 1867 was a noble attempt to promote racial equality, most of the evidence suggests it was designed to ensure that the Republican Party retained control of the federal government. When the Civil War ended, the party was barely 10 years old. It might have been strangled in its cradle if the re-admittance of Southern states failed to be managed in a way that would prevent Southerners from allying with Northern Democrats to regain control of the federal government.

Consequently, Republicans settled on two goals. First was mandatory black suffrage in all former Confederate states. Party members reasoned that the new, inexperienced voters could be manipulated to consistently support Republican interests. Second was denying political power to the Southern whites most likely to oppose Republicans. A combination of the two factors enabled the infant GOP to form carpetbag puppet regimes in the Southern states. Initially obtained through the 1867 Reconstruction Acts, the goals were incorporated into the Constitution through the 14th and 15th Amendments. Only by means of the carpetbag regimes did the amendments cross the required 75 percent-of-states ratification threshold.

Although Congress limited President Johnson’s authority in various ways, the best-known example was the 1867 Tenure of Office Act, which restricted his ability to dismiss presidentially appointed executive officers. Specifically, it stipulated that if such appointees had been subject to the advice and consent of the Senate upon appointment, then the president could not dismiss them without Senate approval. The purpose was to keep War Secretary Edwin Stanton in the cabinet as a Republican spy. Johnson thought the act was unconstitutional, which the Supreme Court later confirmed in 1926. Intending to test it before the contemporary Supreme Court, however, Johnson dismissed Stanton while the Senate was out of session. He temporarily replaced Stanton with Gen. Ulysses Grant until the question of the act’s legality could be settled.

After returning to Washington, on January 13, 1868, the Senate voted 36 to 6 to reject Stanton’s removal. The next day a surprised president learned that Grant had resigned earlier that morning and Stanton had reoccupied the office. Johnson had understood that Grant would let the president litigate the case before Stanton could retake the office. Instead the general was swayed by the power of a Republican Congress intent upon impeachment and sided with them. In return, four months later the party nominated him as their winning 1868 presidential candidate. Three days after Johnson attempted to remove Stanton a second time on February 21, 1868, with another temporary appointee, the House of Representatives impeached him rather than let the Tenure Act be tested in the courts. Most of the 11 impeachment charges involved the Tenure Act. Two that did not, however, were complaints about Johnson’s verbal criticisms of Congress. The Senate declined to convict Johnson by a single vote.

In order to deny President Johnson any opportunity to appoint a single Supreme Court justice, Congress reduced the size of the Court from 10 justices to seven. As soon as President Grant took office in 1869, Congress increased the Court’s size to nine justices, where it has since remained. The change enabled Grant to promptly appoint two new Republican justices.

Finally, Congress ignored the court’s 1866 Ex Parte Milligan ruling, which denied military tribunals jurisdiction over civilians wherever civil courts were functioning. Nonetheless, when a Mississippi newspaperman appealed to the Supreme Court under the ruling to seek a civil trial on a freedom-of-speech dispute with the military district commander, Congress passed a law denying the court judicial review on matters involving the Reconstruction Acts. Since one of those acts had dictated military occupation in Mississippi and nine other Southern states, Congress was imposing military courts on civilians throughout the South even though civil courts were available there. Notwithstanding that the law was ex post facto and unconstitutional, the court was too cowed to challenge Congress and declined to hear the newspaperman’s case.

The era of abusive congressional domination ushered in crony capitalism and Gilded Age immorality. It culminated with President Grant’s corrupt administration after he had become a pawn of the congressional Republicans. In Reconstruction: The Ending of the Civil War, Avery Craven writes of Grant during the 1868 election: “Grant never quite knew what was taking place around him or what it all meant. He became a pathetic, bewildered, shuffling figure whom others used for ends he never understood.”

At least 10 scandals stained Grant’s presidency. Among them was the 1873 bankruptcy of Jay Cooke & Company, which triggered a five-year depression. Cooke was Grant’s largest campaign contributor. Despite receiving land grants equal in size to the entire state of Missouri, Cooke’s Northern Pacific Railroad also went bankrupt. Its intended St. Paul-to-Seattle line had only laid track from St. Paul to Bismarck.

Recent biographers fail to appreciate Grant’s conflicted civil rights motives. Ron Chernow, for example, concludes he was “the single most important president in terms of civil rights between Abraham Lincoln and Lyndon B. Johnson.” But Chernow minimizes Grant’s self-interest. Although he won the 1868 presidential popular vote by a 53-to-47 percent margin, Republican politicos correctly anticipated that black Southern votes would be important. Grant would have lost the popular vote without them, although he would have still won the Electoral College. In contrast, he did nothing for minorities that were unimportant to the party. Examples include Chinese Americans and Native Americans.

Federal laws started marginalizing Chinese Americans during his presidency in 1870 and 1875 and continued afterward with a variety of discriminatory acts mostly under Republican administrations. In 1876, Grant secretly provoked a war with Great Plains Native Americans. He wanted to give white men access to dubious Black Hills gold deposits as a way to help America recover from Cooke’s depression. Sioux descendants litigated the matter until 1980, when the Supreme Court awarded eight tribes $106 million. Regarding the incident and “President Grant’s duplicity,” a lower court concluded in 1975, “A more ripe and rank case of dishonorable dealing will never, in all probability, be found in our history.” Such were the ramifications of a rogue Congress.