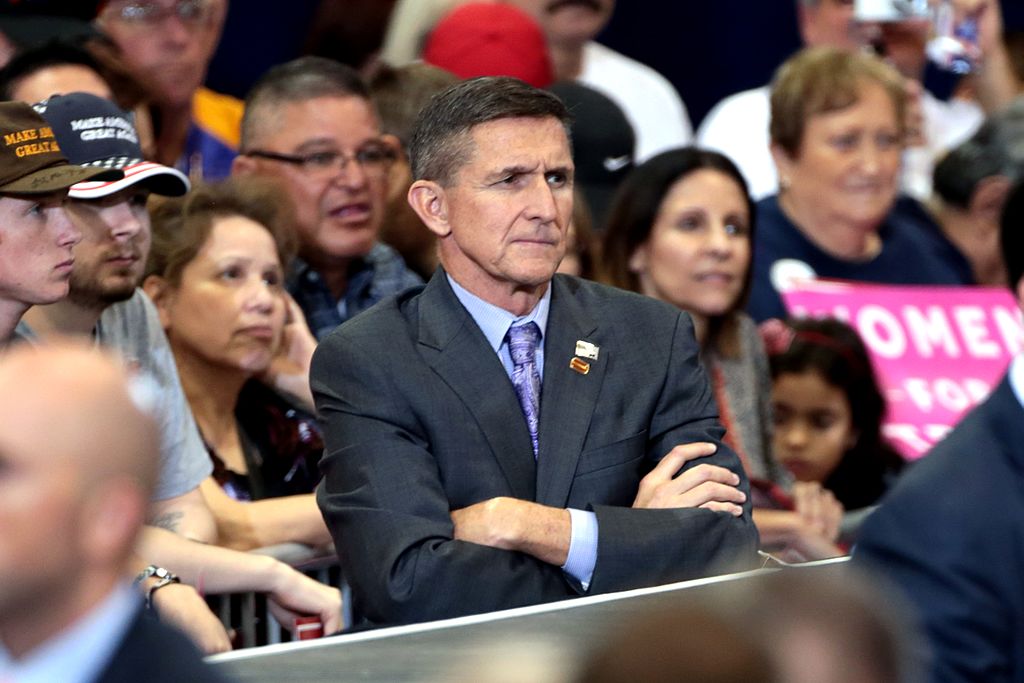 Army Lt. Gen. Michael Flynn has been entrapped, prosecuted, and persecuted. He pled guilty to lying to the FBI in an interview that was set up to corner him into a lie. Now, with President Trump having lost the election to former vice president Joe Biden, the stage is set. But for what?

Sidney Powell, Flynn’s lawyer, met with President Trump in September and asked him to not pardon Flynn. Flynn evidently doesn’t want a pardon because it carries the stigma of guilt, which Flynn vehemently denies despite his guilty pleas, reportedly extracted under threat of prosecution of his son.

How Flynn reached this awful point is a lesson in FBI misconduct, abuse of power by former special counsel Robert Mueller’s team, and misconduct by the trial judge, Emmet Sullivan of the U.S. District Court for the District of Columbia. It goes back much further — and higher — than that.

Flynn’s career began when he was a new second lieutenant in 1981. He served in intelligence positions, continuing to distinguish himself.

In April 2012, about a year after Osama bin Laden was killed in a raid by Navy SEALs, Flynn was nominated to become the director of the Defense Intelligence Agency. On taking that job, he found that the Obama administration — from top to bottom — was convinced that the terrorist threat had ended with bin Laden’s death. Flynn quickly became uncomfortable with the spin, and disagreed with it vocally but internally. Obama’s intelligence leaders fired him in August 2014 for not buying into the foolish idea that the war against terrorists was over.

Flynn was fired as a result of Obama’s Director of National Intelligence, James Clapper, campaigning against him. At Flynn’s retirement ceremony, Adm. Mike Rogers, then director of the National Security Agency, praised him as the best intelligence officer in the past 20 years.

Flynn met candidate Trump in August 2015 and began advising him on foreign affairs and defense matters in about February 2016. When Trump won the 2016 election, Flynn was chosen to be his first national security adviser.

Sometime between February and July 2016, the FBI and CIA commenced their “Crossfire Hurricane” counterintelligence “investigation” into Trump’s campaign and, probably, Trump himself based solely on the entirely fabricated “Steele Dossier.”

The “dossier,” as we have known since the January 2018 “Nunes Memo” (see my previous articles, “Worse Than Watergate,” Parts 1, 2, and 3), was created and paid for by the Hillary Clinton campaign.

(I apologize to Russian dictator Vladimir Putin for accusing him of conducting a disinformation campaign in 2016. It was all Hillary all the time. Putin was a mere beneficiary of her scheme.)

They quickly seized on Flynn’s business relations with Russia and Turkey. He had made many contacts in both nations and had accepted the invitation to give a speech in Russia, for which he was well paid. Note that Flynn was not charged with violations of the Foreign Agents Registration Act (FARA), about which more later.

Events accelerated with Trump’s election and his choice of Flynn for national security adviser.

Before the election, Obama had imposed economic sanctions on Russia. On about December 29, 2016, Flynn was contacted by then-Russian Ambassador Sergei Kislyak. This is precisely the sort of contact that an incoming national security adviser should make.

In conversations with Kislyak, Flynn reportedly asked Kislyak to not let Russia exacerbate the situation, which Putin later agreed not to do. Flynn related his talks with Kislyak to Trump’s transition team, as he should have.

For some reason, on about January 14, in a conversation with incoming Vice President Mike Pence, Flynn denied talking to Kislyak about sanctions. Flynn deserved to be fired for lying to Pence. But that wasn’t the reason he was removed.

Later in January, the FBI sought to interview Flynn. During a meeting with his top bosses, then-FBI Director James Comey and then-Deputy FBI Director Andrew McCabe, the FBI’s counterintelligence branch chief Bill Priestap took notes. One of those notes asked, “What is our goal? Truth/Admission or to get him to lie, so we can prosecute him or get him fired?”

The FBI interviewed Flynn on January 24, 2017, without notifying the White House counsel’s office, without Flynn having counsel present, and without warning him that it was an interview in which he was subject to prosecution if he lied to the FBI. All of those things were violations of standard FBI procedures.

Comey later gloated, “I sent them [the agents]. Something we’ve, I probably wouldn’t have done or maybe gotten away with in a more organized investigation, a more organized administration.”

Strzok and the other agent reportedly prepared a “302” — the FBI’s standard form for reporting initially on an interview — in which they reported that they didn’t think Flynn had lied. (McCabe later admitted this in congressional testimony.)

After several conversations with the administration and media interviews, Flynn resigned from the national security adviser post on February 13. He was indicted for lying to the FBI by Special Counsel Robert Mueller’s team and pleaded guilty to that charge on December 1, 2017. As noted above, Flynn’s guilty plea resulted from Mueller’s team’s threat to prosecute Flynn’s son for FARA violations in regard to his and his father’s business in Russia and Turkey.

Why would they — or could they — charge Flynn’s son without charging Flynn of the same alleged crime?

There were endless delays in sentencing Flynn. Flynn got a new lawyer, Sidney Powell, who demanded that the FBI disclose all possibly exonerating evidence, which it hadn’t done despite the constitutional requirement that it do so.

The FBI dragged its feet, and the result was that Flynn’s sentencing was repeatedly delayed. (The Priestap notes were part of the long-delayed FBI disclosures.)

On May 7, 2020, the Justice Department filed a motion with District Court Judge Emmet Sullivan to dismiss the case against Flynn on the grounds that Flynn’s misstatement to the FBI about discussing sanctions with Kislyak was not material to its investigation. The motion said, “The Government is not persuaded that the January 24, 2017 interview was conducted with a legitimate investigative basis and therefore does not believe Mr. Flynn’s statements were material even if untrue.”

At that point, Judge Sullivan had no case before him. The Executive Branch had decided to cease its persecution of Flynn, so there was no case to adjudicate. But Sullivan didn’t grant the motion. Instead, he hired a former federal judge, John Gleeson, to argue against it.

Seven months later, Sullivan still hasn’t ruled on the motion to dismiss. Why? Because Sullivan’s refusal to dismiss is a political act. Yes, the Federal Rules of Criminal Procedure seem to say that Sullivan did not have to grant the DOJ motion, but controlling Supreme Court precedents say that he did.

Sullivan is still sitting on the Flynn case. He was waiting to see the outcome of the election. Now, with an incoming Biden administration, he is waiting to see if a new attorney general will reverse the previous DOJ position and continue the prosecution of Flynn.

From Powell’s statement that she had asked Trump to not pardon Flynn, it’s clear that Flynn wants to fight it out no matter how long it takes. He wants to be exonerated and not have any question of guilt hanging over him for the rest of his life.

Sullivan has indicated that he may still sentence Flynn for lying to the court in pleading guilty to a charge of which he is clearly innocent.

Flynn deserves better from Sullivan and from a Biden attorney general.

Whatever Sullivan eventually decides, Flynn deserves exoneration. He will get it at some distant date, from an appeals court — or the Supreme Court — even if Sullivan sentences him. He’s a tough, smart old soldier who deserves that exoneration.