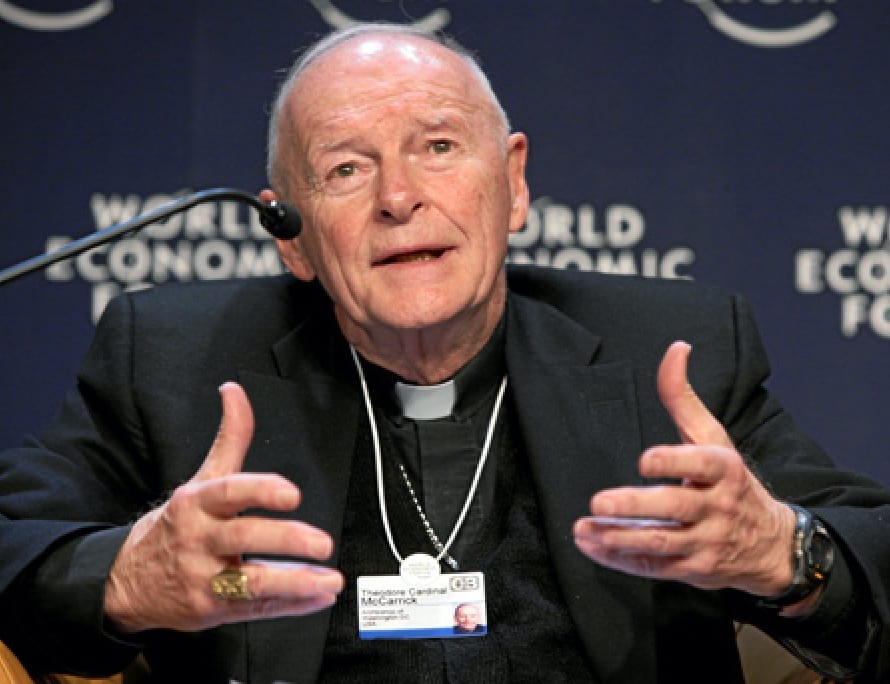 Ever since Theodore McCarrick’s exposure as a molester earlier this year, his cronies, patrons, and protectors have downplayed his squalid crimes. Cardinal Donald Wuerl, his successor who sent underlings to work for him even after learning of an investigation into his abuse, pooh-poohed the McCarrick scandal. “I don’t think this is some massive, massive crisis,” he said. Now Fr. John Jenkins, the president of Notre Dame, which conferred honors upon McCarrick before his scandal, warned Catholics this week not to turn McCarrick into a “monster.”

Jenkins cast McCarrick’s molesting of an altar boy in the sacristy, molesting another underage male teen for years, and forcing countless seminarians into his bed as a tragic foible confined to one part of his life. He said to Crux: “[The tendency is] just to imagine that they are thoroughly corrupt people, but the problem is that it’s not true. It’s a part of their lives that is deeply problematic, but another part that is not.”

Jenkins refuses to withdraw Notre Dame’s awards to McCarrick since he “maintains his innocence” and hasn’t had his day in Vatican court yet. Maintains his innocence? What a disgusting sham, given that McCarrick is under the protection of Church officials who could have demanded he come clean months ago as the most minimal of conditions for his continued financial support from the faithful’s hard-earned donations.

Of course, Jenkins’s reduction of grave felonies to a “part” of McCarrick’s life is also a gross lie. Those crimes consumed his life and colored almost every word and deed of his ecclesiastical career, from his launching of the Papal Foundation to buy the Vatican’s silence and protection to his systematic promotion of fellow deviants and heretics whom he knew would never rat him out. The American episcopate is largely a Who’s Who of corrupt McCarrick cronies — a web of astonishing wickedness he spun for decades as one of America’s most powerful and influential prelates.

Nearly every week a new scandal breaks implicating one of his cronies. Last week we learned that McCarrick pal John Jenik, who in his seventies was oddly made an auxiliary bishop in New York City under Pope Francis (right at the time McCarrick’s influence with Bergoglio was at its greatest), has been credibly accused of abusing an underage youth for years, forcing the boy into this bed in a manner identical to McCarrick’s pressuring of seminarians at his beach house.

This week I learned from a well-placed source in New Jersey that Paterson Bishop Arthur Joseph Serratelli, who served McCarrick in Newark, is harboring a priest under state investigation for embezzling money to finance his gay lifestyle. The priest, Fr. Patrick Ryan, mysteriously announced in late October that he was taking “time away” from his parish, St. James of the Marches in Totowa, New Jersey, in order to deal with some “health” issues.

“The real reason is that he has been stealing from the second collection for years and is under investigation,” says my source. “He has a Spanish lover and an offshore account.”

I called over to St. James of the Marches to ask about Ryan’s departure. My call to the pastor was not returned, but I did get a few moments with a staffer who didn’t deny that Ryan is under investigation. “I am not sure,” she replied weakly, before trying to fob me off on “human resources at the chancery.”

I called the head of human resources, who didn’t return my call. I called the bishop’s communications director for two days, who didn’t return my calls. But I did talk to the number two in the human resources department. I called her on the cell phone number she gives on her voice mail. She refused to answer any questions about Ryan and hung up on me when I asked if he is under investigation for embezzlement.

“We don’t know where he is,” said the staffer at St. James of the Marches. According to my source, Fr. Ryan is holed up at the mansion of Bishop Serratelli in the “tony part of Paterson on Derrom Avenue.” My source added, Ryan is “very good” friends with the bishop’s secretary.

Presumably, Serratelli will attend the United States Conference of Catholic Bishops meeting in Baltimore this upcoming week. If his fellow bishops are serious about exorcising the demons of McCarrick and his legion of enablers and protégés from the Church in America, they will demand answers from Serratelli about this unfolding scandal. But in all likelihood they will cover for him, just as they covered for his patron. Once again it looks like Caesar, the laity, and the press will have to do what the bishops won’t.